​Cancer; ignoring nutrition at our peril 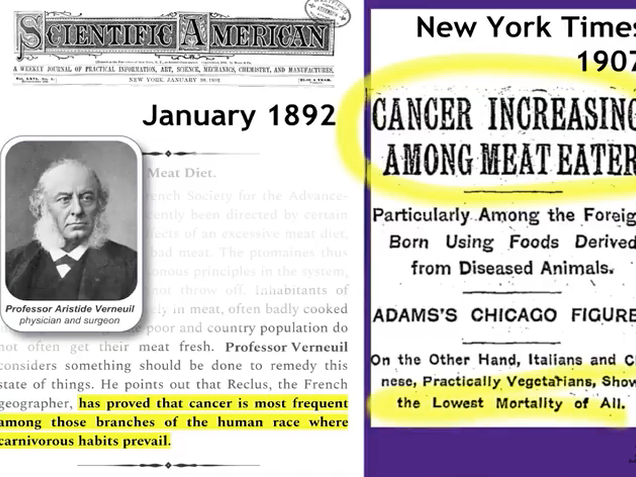 In the UK, cancer is now the commonest cause of death, the top cause of avoidable death and accounts for 42% of cases of premature death. These statistics are in the face of an ever-increasing number of treatments. So where have we gone wrong? In this article I focus on the role of nutrition and how ignoring its impact on cancer development is hindering our ability to prevent large numbers of cancers.

We have known for a long time that diet and lifestyle play a major role in cancer development (1). We have finally accepted that smoking tobacco causes cancer, however, we seem less familiar with the other lifestyle factors that impact our risk. These include diet, obesity, sun exposure, physical exercise and alcohol. If we addressed all these factors, we could prevent more than 40% of all cancers (CRUK.org). Many of the studies showing a link between these lifestyle exposures and cancer have been observational or epidemiological and the critics always say that these studies show correlation not causation. If this same argument was used in the case of smoking and cancer, then we would still not believe that smoking causes cancer, as there are no randomised studies demonstrating this and to do one now would be unethical.

To this end, if several epidemiological studies involving hundreds and thousands of individuals all report the same findings, surely we have to pay attention. The studies I refer to include the EPIC study(European Prospective Investigation into Nutrition and Cancer), two Harvard University Studies (The Nurses Health Study and The Health Professionals follow-up study), the National Institute of Health American Association of Retired Persons study and the Adventist Health Studies. The overall findings of these studies demonstrate that the higher the intake of animal foods, including dairy, the higher the risk of developing cancer (2, 3). The impact on individual cancer types varies because there are a number of other overlapping risk factors that impact cancer development. Studies also show that higher intakes of plant foods, including fruits, vegetables, whole grains and legumes, are associated with a lower risk of cancer (4). Increasing the amount of plant foods and decreasing animal foods can also positively impact the chances of remission and survival after a cancer diagnosis (5, 6).

The gold standard, randomised intervention study is virtually impossible to conduct on a large scale. Due to human nature you cannot make people 100% adherent to a particular diet and it is virtually impossible to control for all the other confounding lifestyle factors. Studies that have succeeded have involved delivery of meals to participants houses (7), which clearly is not feasible on a large scale.

In support of these epidemiological data, we have very plausible mechanisms by which diets high in animal foods promote cancer. These include a) increasing the risk of obesity and diabetes, both risk factors for cancer (8); b) elevation of IGF-1 (insulin-like growth factor-1) levels in the blood, a known growth factor for cancer (9); c) increased levels of sex hormones, known to promote hormone-dependent cancer such as breast, ovarian, endometrial and prostate (10), d) transmission of viruses such as bovine leukaemia virus (11); e) presence of carcinogens in certain animal foods, like processed meats (12)and e) production of carcinogens when cooking animal foods (12).

In addition, there are small intervention studies showing that changing to a low-fat plant based diet after the diagnosis of early stage cancer can slow progression and favourably alter the expression of genes within the cancer (7, 13).

If we continue to underplay the results of these studies then we are denying ourselves the opportunity to significantly reduce our risk of cancer.

We continue to study the effect of diet on health by breaking it into individual macronutrients i.e. fat, carbohydrates and protein. We don’t eat macronutrients; we eat food. So our approach to nutrition and health should focus on dietary patterns rather than its individual components. We know that a diet composed predominating of whole plant foods is associated with longevity, improved health and a reduction in a number of common chronic diseases, including cancer (14). We also know that there are differences between animal and plant macronutrients. Animal protein and fat is associated with an increased risk of chronic disease and cancer, whereas plant protein and fat is not (9). Refined carbohydrates are very different from the complex carbohydrates found in plant foods. Vitamins and other micronutrients in plants are health promoting and cancer preventing and these components work synergistically, such that extracting an individual component does not result in the same benefit as eating the whole food (4).

When we talk about food in terms of macronutrients we confuse the general public as people go to the supermarket to buy food; not fat, carbohydrate or protein. We should be promoting diet patterns high in whole plant foods and sign posting the public to these foods.

3) Hoping supplements can compensate for our unhealthy diet

Large-scale vitamin and micronutrient supplement studies, in the absence of nutrient deficiency, have never resulted in significant benefits for cancer prevention. Some studies have even resulted in harm. An example of this is the SELECT trial, a large scale study supplementing middle aged men with selenium, vitamin E or both in order to prevent prostate cancer (15). Not only did the vitamin E arm show an increased risk of prostate cancer, the selenium supplementation arm resulted in a trend (not statistically significant) to an increased risk of diabetes. Neither of these results could have been predicted and it is difficult to explain the reasons why this would be. However, it confirms that nutrients in plant foods do not work in isolation, but work together with other food components to have a health promoting effect.

Most large clinical trials in cancer in the UK are sponsored and/or funded by the pharmaceutical industry, as Government and Society do not have the money to conduct such studies. Pharma companies only have one goal, to make a profit for their shareholders. Patenting and selling pharmaceutical drugs generate profit. Therefore, their agenda is biased and research aims are in general to demonstrate that a new drug performs better than an older drug (16). There is no doubt that treatments for cancer have improved considerably since the Second World War, but at the expense of focusing on cancer prevention. The latter is desirable for so many reasons. It is less costly to society in terms of health expenditure and productivity to promote health rather than treat disease (17). This will never be the aim of Pharma as it would result in decreasing profits. Continuing to allow Pharma to direct the academic and research agenda can only result in treatments for disease and not the promotion of health.

4) Failure to apply a precautionary principle to nutrition

There are many examples of lifestyle exposures that may adversely affect our health, but cannot be proven for certain. Red meat, for example, has been classified as a probable carcinogen (Group 2a, may cause cancer) after the World Health Organisation reviewed hundreds of studies on the subject. My response to this is that where possible we should eliminate red meat from our diet as it is not necessary for optimal health and is associated with an increased risk of many chronic diseases in addition to probably causing cancer. However, the response from Government is far removed from this. Red meat ‘in moderation’ continues to be promoted as a healthful component of our diet.

Another example would be dietary transmission of animal viruses to humans and their role in cancer promotion. We know that human viruses, such as HIV, hepatitis B and C, HPV and HTLV cause cancer in humans. We also know that animal viruses can be transmitted to humans. We know that poultry slaughterhouse workers have an increased incidence of liver and pancreatic cancer — 9 times increased risk, and this is thought to be due to transmission of a poultry virus (18). Bovine leukaemia virus is found more frequently in breast cancer tissue than normal breast tissue (11). Hepatitis E can be transmitted from animals (mainly pigs in the UK) to humans and in some people cause liver cirrhosis (19). Other hepatitis viruses increase the risk of cancer so it may be that hepatitis E does too. None of these findings in themselves confirm that animal viruses cause cancer, but surely we should not be waiting for certain proof, which may take decades to become apparent. If there were even a small chance that animal viruses cause human cancers then the precautionary approach would be to avoid exposure.

5) Over emphasis on understanding the genetics of cancer

Best estimates suggest that up to 10% of our risk of various diseases, including cancer comes from the genes we inherit. That means we have control over 90% of our chance of getting an illness. We also know that even if you are genetically predisposed to a certain disease, you can reduce the risk by adopting a healthy lifestyle, including a diet centred on whole plant foods (20, 21). However, when it comes to cancer, more and more funding is being directed towards the understanding and targeting of genetic abnormalities in the cancer. In the UK, we have the 100.000 genome project that is consuming vast amounts of funds, and in my view is going to benefit just a few.

We know that cancer starts decades before it is clinically apparent and there are three main phases of cancer development; initiation, promotion and progression. This gives us a long time to adopt a cancer-preventing lifestyle and the phase of cancer promotion is where lifestyle has the most impact. Focusing on the genetics gives the public the impression that whether they get cancer is pre-determined. This cannot be further from the truth when it considering some of the commonest cancers — breast, prostate, lung and colon cancer (1). Treating the end stage of cancer development by targeting one or two genetics defects is unlikely to impact the burden of cancer to the extent that may be possible through lifestyle approaches (21). There are of course notable exceptions where targeted therapies have positively impacted survival in certain cancer types.

I hope I have persuaded you that the emphasis for cancer research should be on cancer prevention as this has the ability to positively impact more people than the current focus of treating cancer, which of course is still needed but in parallel. When it comes to diet, the adoption of a whole food plant based diet is one that will give us the best chance of preventing cancer. We have enough evidence now to support this dietary approach and waiting for more studies will only delay our chances of reducing the incidence of the commonest cause of premature death.