Does diet impact the risk of non-Hodgkin lymphoma?

Non-Hodgkin lymphoma (NHL) is the eleventh commonest cancer globally and the sixth and eighth commonest in the United States and United Kingdom, respectively1. There are established risk factors, including viral infections, autoimmune disease, occupational exposures, and radiation, but the vast majority of cases remain unexplained. A frequent question asked by patients is “What about my diet?” For certain cancer types, there are well-established associations between dietary exposures and diseases, such as processed meat and bowel cancer. However, for NHL the associations with dietary factors are less established and often not considered in consultations. Given that some common NHL subtypes have a familial risk, there may be an opportunity to counsel family members on lifestyle approaches aimed at risk reduction.

With this in mind, we review evidence for the relationship between diet and the risk of NHL. The data are summarised in Table 1. 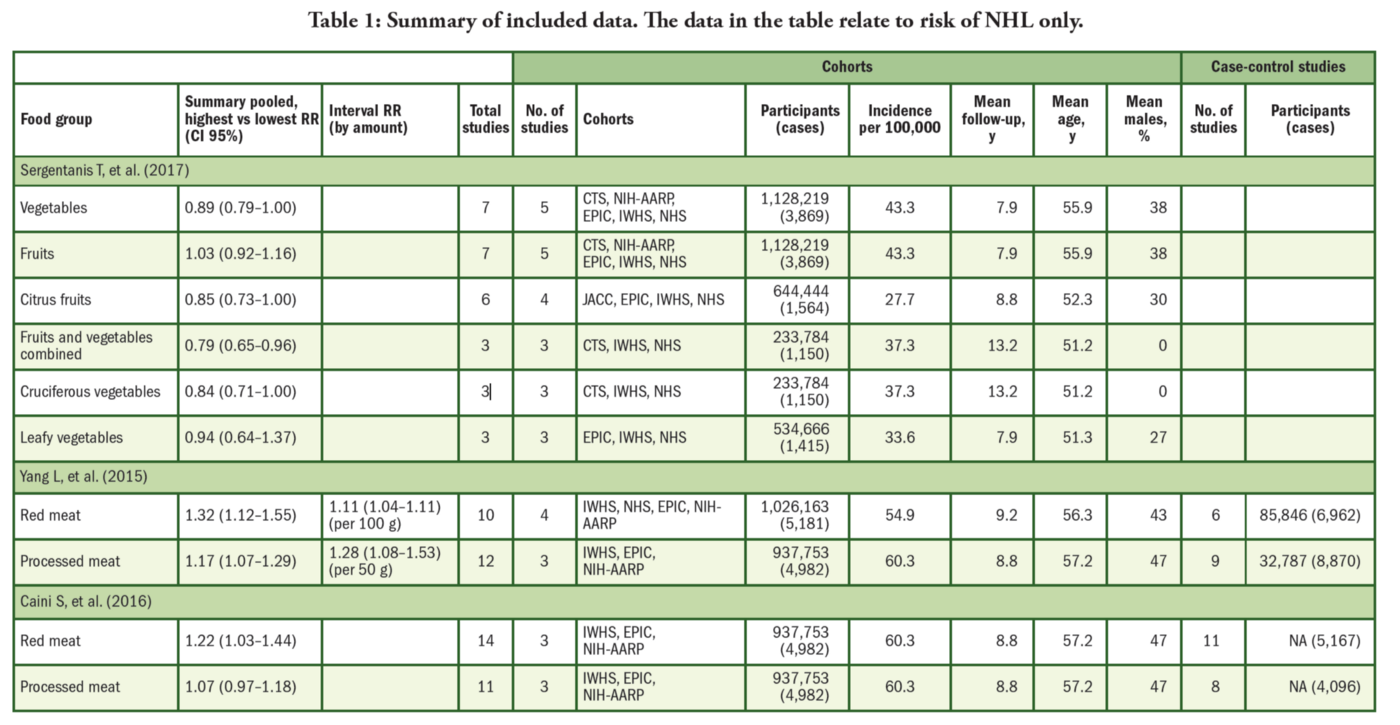 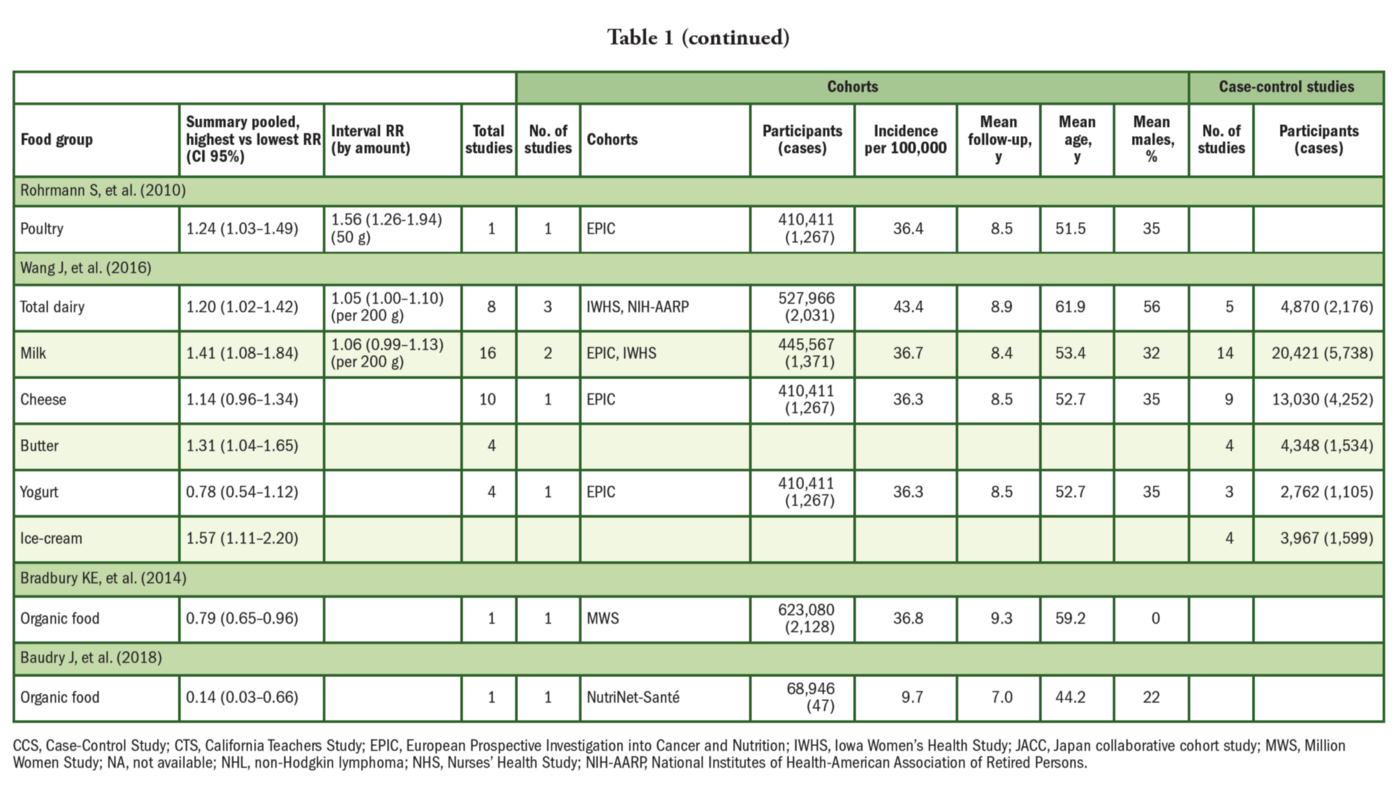 Another meta-analysis studied all foods of animal origin and the risk of NHL.3 Based on 10 149 cases from 14 independent studies, there was a positive association between red meat consumption and NHL (summary RR 1.22, 95% CI, 1.03–1.44). Although results were not reported stratified by study design, this meta-analysis included the same 4 cohort studies as the first meta-analysis by Yang et al.,2 which showed a non-significant association among cohort studies. There was no significant association between processed meat consumption and NHL risk.

Within the European Prospective Investigation into Cancer and Nutrition (EPIC) study, which is included in the meta-analyses mentioned above, a high intake of poultry was related to an increased risk of NHL (RR per 10 g intake/day 1.56, 95% CI, 1.26–1.94).4 It has been hypothesized that an oncogenic poultry virus may be implicated in the pathogenesis, but this has not been proven. However, these results have not been replicated in other cohort studies and, therefore, should be interpreted with caution.

The interpretation of these data is limited by differences in results based on cohort versus case-control study design, inclusion of patients from different continents, and inconsistent use of validated food frequency questionnaires.

The French NutriNet-Santé prospective cohort study of 68 946 French adults reported a strong reduction in risk of NHL with consumption of organic food (HR = 0.14, 95% CI, 0.03–0.66).6 Only 1 other cohort study has, to date, assessed the association between organic food consumption and cancer risk.7 This was a prospective study of 623 080 middle-aged women in the United Kingdom. After 9.3 years of follow up, consumption of organic food was associated with an inverse risk of NHL (RR 0.79; 95% CI, 0.65–0.96). These associations are highly plausible given that the International Agency for Research on Cancer (IARC) has classified certain pesticides (glyphosate, malathion, diazinon) as carcinogenic in humans (group 2A) and all 3 pesticides were found to increase risk of NHL. However, further studies are needed for confirmation.

In the available literature, there is evidence to suggest that certain foods or food groups and dietary patterns may influence the risk of developing NHL. Red meat consumption has been positively associated with the risk of developing NHL in two meta-analyses and processed meat and dairy consumption was associated with increased risk of NHL in one meta-analysis. However, the associations were only significant among case-control studies. Intake of total fruit and vegetables, cruciferous vegetables, and citrus fruits has shown an inverse association with NHL. Two cohort studies have reported inverse associations between organic food consumption and risk of NHL, and these findings are consistent with the recent assessment by the IARC of the carcinogenicity of certain pesticides.

Given that most of the current literature on diet and risk of NHL is based on case-control studies, which to a greater degree can be affected by recall and selection biases than cohort studies, additional well-conducted cohort studies with validated questionnaires, repeated measurements of diet, and appropriate adjustment for confounding factors are needed before firm conclusions can be made. To strengthen the evidence and provide more certainty, the underlying pathophysiological mechanisms should also be studied in more detail.

While the current evidence regarding diet and NHL may not be strong enough by itself for dietary recommendations to be made specifically for prevention of NHL, the findings are concordant with data regarding diet and risk of other cancers and chronic diseases and suggest that the current World Cancer Research Fund recommendations to limit the amount of red and processed meat and to increase the amount of fruit and vegetables eaten in a day also may reduce the risk of NHL. There is also suggestive evidence that eating cruciferous vegetables, citrus fruits, and organic foods may be particularly important for reducing the risk of NHL.