Is Hector Bellerin’s vegan diet to be blamed for his slow injury recovery?

(A response article To James McNicholas’ “Is Hector Bellerin helped or hindered by his veganism?”) 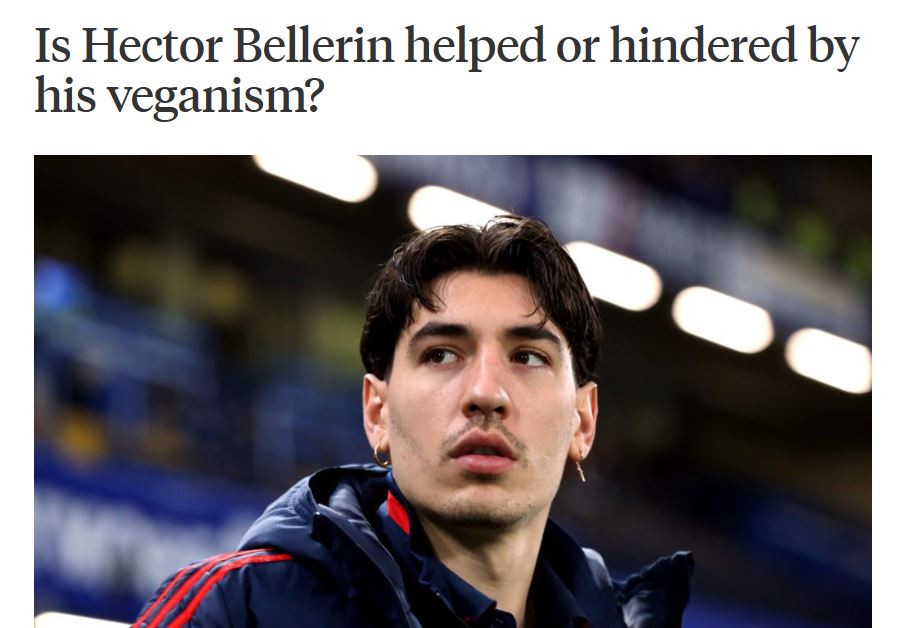 (Image may be subject to copyright)

The problem with poor journalism is that it does not exist in a vacuum. In fact, it often exists in the realm of hubris, advancing misconceptions to support widespread beliefs rather than pursuing facts in an attempt to broaden an audience’s perspective. These pitfalls are evident in a recent piece published by The Athletic entitled “Is Hector Bellerin helped or hindered by his veganism?” Regrettably, James McNicholas does not set out to address this question with intellectual integrity; he simply provides a one-sided account that relies on folklore rather than science.

Héctor Bellerín is a professional Spanish footballer known for both his extraordinary athleticism and commitment to social causes. In January of last year, he suffered a ruptured cruciate knee ligament, an injury that is severe but not uncommon in professional athletes.

In the article, McNicholas interviews and quotes Matt Lovell, an elite sports nutritionist, about the potential impact of veganism on athletic performance. Sadly, Lovell refers to the same old myths about a vegan diet that we often find in sensational tabloid papers.

Let’s take just a moment to dispel some of those nutritional myths.

Vitamin B12 supplementation
Let’s start with the basics: Vitamin B12 is not produced by animals, a key fact that Lovell fails to mention. While vitamin B12 is made by microorganisms in the soil and water, our modern hygienic practices kill those microorganisms, making supplementation essential. Vitamin B12 supplements are routinely added to the feeds of factory-farmed animals which is how omnivores receive their daily dose. Most vegans take supplements, but others prefer to get it via large amounts of fortified foods such as plant milks and plant cheeses or by adding fortified nutritional yeast to their meals.

Calcium
Calcium is a mineral found in the soil which is absorbed into the roots of plants. A vegan diet that incorporates green leafy vegetables, legumes, nuts, and seeds provides sufficient amounts of calcium to rival any non-vegan diet.

Omega-3s
Omega-3s are a family of essential fatty acids that may provide a number of health benefits. Unfortunately, the claim that only eating fish can supply omega-3 is misleading. Docosahexaenoic acid (DHA) is an omega-3 fatty acid. It is easy to get alpha-linolenic acid (ALA) and eicosapentaenoic acid (EPA), the precursors of (DHA), from a vegan diet. In fact, one tablespoon of flaxseed provides your recommended daily allowance. Despite claims that the conversion of ALA/EPA to DHA is unreliable, some studies have shown that vegans have better conversion rate than other groups.

Incomplete amino acid profile from plant proteins
The idea that vegans need to combine specific protein foods in order to obtain all the essential amino acids is a myth. To be sure, the protein complementing myth was debunked a few decades ago. Sadly, some experts still promote the idea.

While it is possible that a specialist like Lovell could be unaware of these basic nutritional facts, we should not overlook the fact that he is an ambassador for Kinetica Sports which is owned by Carberry Food Ingredients, a dairy-based product manufacturer. This, of course, calls Lovell’s motives into question and may explain why he is so dismissive of a vegan diet.

It is surprising that McNicholas did not choose to interview Richard Allison, the nutritionist of Arsenal Football Club. In an interview last year, Allison said that the team’s chef prepares the best and healthiest vegan foods. Furthermore, the team has their own nutritionist whose job is to optimise the diet of the athletes. Surely, Allison would have monitored Bellerin’s meals and taken steps to ensure that his vegan diet contains all the essential nutrients he requires.

What’s more, it is clear that numerous factors contribute to the success of an athlete’s ability to recover from injury; Bellerin’s diet is not the issue causing any lack of performance.

Regrettably, McNicholas fails to explore other possibilities. We know that knee injuries account for 25% of leg injuries among soccer players. An anterior cruciate ligament (ACL) injury can often be a career-ending issue or the beginning of the end for many athletes’ careers. Two well-known footballers who never truly recovered from their ACL injures were Pierluigi Casiraghi and Alf-Inge Haaland – just to mention a couple.

Another rather important issue McNicholas does not address is the rate of mental health problems among professional football players, especially those who have sustained more than two injuries. Depression and anxiety can have a negative impact on an athlete’s performance.

Ultimately, it is a one-sided article, quoting dubious sources. Instead of shedding light on Bellerin’s injury and career, the piece lacks insight and perpetuates myths about a vegan diet.

BIO: Dr Leila Dehghan is a doctor turned plant-based nutritionist and is an advisory board member of Plant-based Health Professionals UK.