An open letter from more the 200 NHS doctors and staff to NHS leaders and the UK Government.

More than 200 NHS doctors and staff have written an open letter to NHS leaders and the UK Government, urging for a radical change to the unsustainable and unhealthy food environment. We were pleased that the Metro UK covered our story, albeit with a rather sensationalised headline. The key message of our open letter is the urgent need for a fair, sustainable and healthy food system that will promote health and prevent chronic illness. You can read the full letter here.

It’s also good to see this message reinforced in the Lancet, with a book review by Marion Nestle — an authority on food politics and Professor of nutrition, food studies and public health. Marion summarised what we have known for a long while and has been further highlighted by the current pandemic, that ‘current food systems fail to protect populations from hunger and diet-influenced non- communicable diseases and why the poor, disenfranchised, discriminated against, and chronically ill are those most vulnerable to this disease’. The book by Professor Tim Lang’s, Feeding Britain: Our Food Problems and How to Fix Them, is a case study of the UK food system, which is broken. The UK is unable to produce enough food to feed its citizens, instead relying on ‘cheap food produced by cheap labour from former colonies’. The book highlights how the UK foods system is flooded with cheap meat, dairy and ultra-processed ‘junk’ foods at the expesne of both human and environmental health. 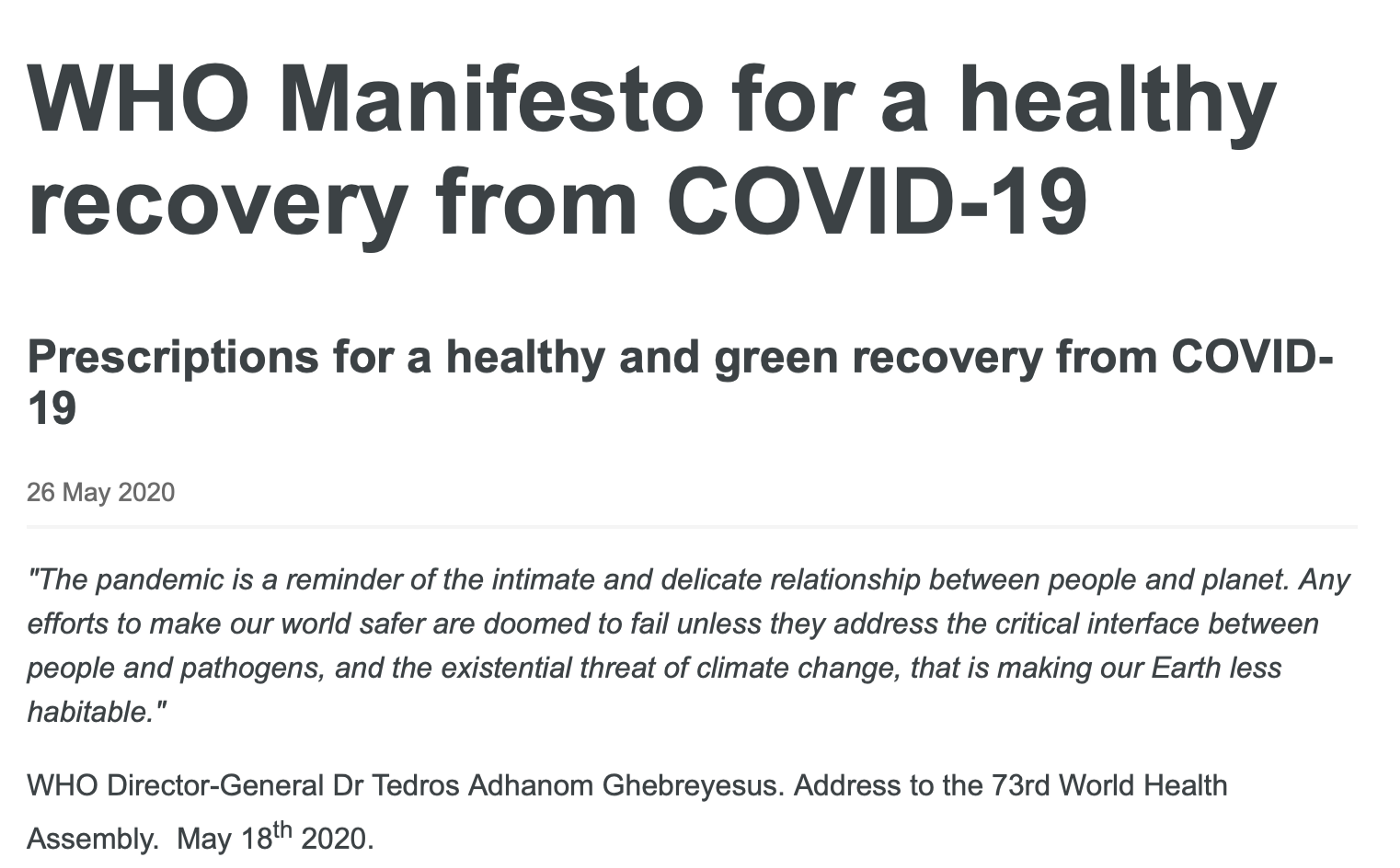 The WHO is also calling for a healthy recovery from COVID-19 with six recommendations; 1) Protect and preserve the source of human health: Nature, 2) Invest in essential services, from water and sanitation to clean energy in healthcare facilities 3) Ensure a quick healthy energy transition, 4) Promote healthy, sustainable food systems, 5) Build healthy, liveable cities 6) Stop using taxpayers money to fund pollution. Regarding the food system, the WHO acknowledge that ‘Agriculture, particularly clearing of land to rear livestock, contributes about ¼ of global greenhouse gas emissions, and land use change is the single biggest environmental driver of new disease outbreaks. There is a need for a rapid transition to healthy, nutritious and sustainable diets. If the world were able to meet WHO’s dietary guidelines, this would save millions of lives, reduce disease risks, and bring major reductions in global greenhouse gas emissions’

An open letter from over 350 organisations representing over 40 million health professionals and over 4,500 individual health professionals from 90 different countries in support of #healthyrecovery went to all G20 leaders this week. It is a good message but fails to emphasise the urgent need to transition to predominately plant-based diets as part of the solution.

Here are some of my science highlights:

IMPACT OF PROTEIN SOURCE ON HEALTHY AGING: The optimal diet for healthy aging and prevention of frailty and sarcopenia is still a matter of debate. In the UK hospital setting, my experience has shown that animal protein is still emphasised for elderly patients with sarcopenia and full fat milk, butter and cream are still ‘prescribed’ on drug charts for those that need to gain weight.

The general advice for elders is to consume more protein to compensate for age-related decreases in skeletal muscle mass, strength, and function. This is in the order of 1–1.2g/kg/day. The study highlighted explores the impact of the source of protein — animal vs plant protein — on aging. It uses data from the Seniors-ENRICA cohort from Spain, in which participants aged 60 years or over were selected between 2010–2012 and followed for a median of 8.2 years. Diet data were collected on 2 occasions during this period with changes in dietary protein intake and source determined between the 2 time points. Unhealthy aging was measured using a 52-item Deficit Accumulation Index (DAI) with 4 domains: functional impairments, self-reported health/vitality, mental health, and morbidities/use of health services, on 4 separate occasions.

The paper concludes, ‘Increasing dietary intake of vegetable protein may delay unhealthy aging when replacing carbohydrates, fats, or animal protein, especially from meat and dairy. Whether the potential benefits of plant protein-rich foods are entirely the result of protein itself or may also result from other dietrelated components needs further investigation’. 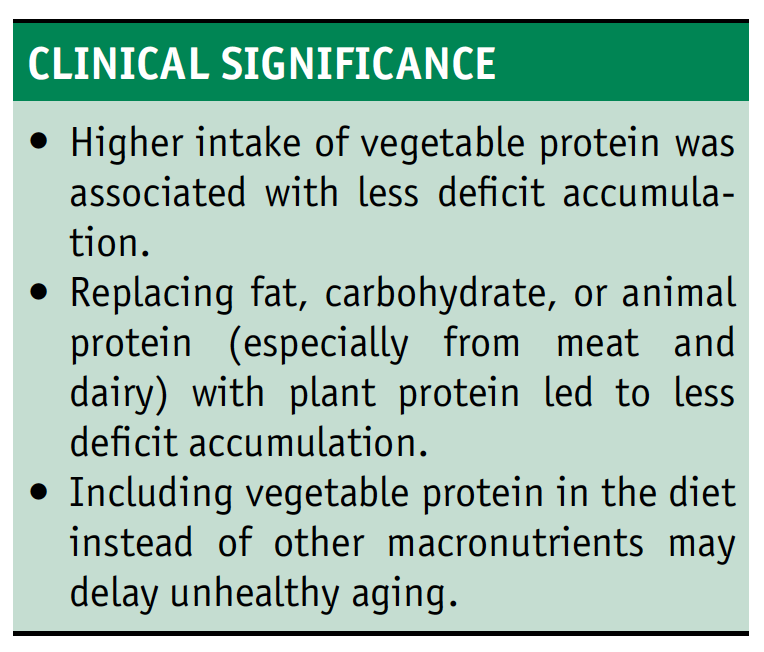 PLANT-BASED DIETS IN RENAL FAILURE: The evidence for plant-based diets to prevent renal failure and delay the progression of already established renal failure continues to accumulate. One of the long-standing concerns has been that plant-based diets may lead to a higher risk of hyperkalaemia (high blood potassium) given the higher potassium content of plant foods, but this has not been borne out in clinical studies.

This prospective study recruited 219 patients with renal failure from a renal nutrition clinic, followed for a median of 40 months, and examined the association between diet pattern and risk of hyperkalaemia. All the patients received personalized dietary counseling, and they were divided into three groups according to the type of renal diet: normal protein (0.8 g/kg/day) diet (NPD), animal-based low-protein (0.6 g/kg/day) diet (LPD), and vegetarian plant-based low protein (0.7 g/kg/day) diet (VD).

The prevalence of hyperkalaemia in the study population was 26% and was associated with the degree of renal failure, particuarly in those with an eGFR of <40ml/min. However, a plant-based, low-protein diet was not associated with a higher prevalence of hyperkalaemia when compared to an animal-based low protein diet after taking into account the residual kidney function.

The accumulation of evidence now supports healthy plant-based diets in renal failure for a number of reasons, including the high fibre content, improvement in gut microbiome, reduced inflammation, benefits to blood pressure and cardiovascular health in general and the alkali nature of plant foods, which helps to prevent metabolic acidosis. NOTE: Nutritional advice should always be sought from a specialist renal dietitian.

SPICE BLEND REDUCES INFLAMMATION CAUSED BY AN UNHEALTHY MEAL: The ultimate goal has to be to adopt a healthy diet. However, if you can’t or won’t, then this study shows that adding a spice blend to a high fat and sugar meal may counteract the adverse effects by reducing inflammation. Herbs and spices literally contain 1000’s of beneficially compounds with anti-inflammatory and anti-oxidant properties.

This study recruited 12 overweight, non-smoking men with at least one cardiovascular risk factor into a 3-period, crossover, randomized controlled trial. In a random order, the participants were fed a high-fat, high-carbohydrate meal (HFCM, ∼1000 kcal, 33% kcal from saturated fat and 36% kcal from carbohydrate), a HFCM containing 2 g spice blend, or an HFCM containing 6 g spice blend. The spice blend consisted of basil, bay leaf, black pepper, cinnamon, coriander, cumin, ginger, oregano, parsley, red pepper, rosemary, thyme, and turmeric. There was at least a 3 day washout periods before eat meal. A variety of blood tests were performed before and after each meal to determine the level of inflammation. 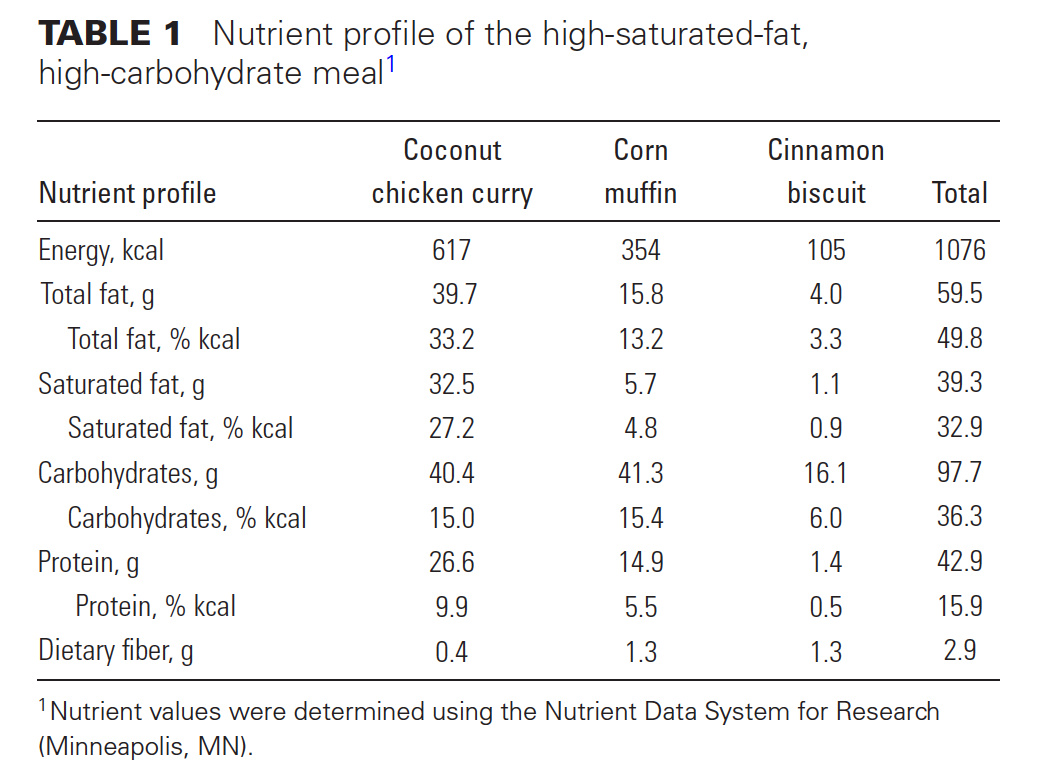 SATURATED FAT AND IMPACT ON BRAIN FUNCTION: Another interesting study on the acute effects of consuming a meal high in saturated fat, but this time on cognitive performance. Diets high in saturated fat have been shown to impair cognitive function and are also associated with endotoxaemia i.e. higher levels of lipopolysaccharide (LPS), a bacterial endotoxin. Saturated fat disrupts the gut lining and allows LPS to enter the blood stream causing inflammation and adverse effects on the immune system.

In this double-blind, randomized crossover trial, 51 women were given either a high-saturated-fat meal or a high-oleic-sunflower-oil meal. Blood markers of endotoxemia and cognitive function, using a tool, called a continuous performance test (CPT), were measured before and 5 hours after the meal. The CPT is a measure of sustained attention, concentration and reaction time based on 10 minutes of computer-based activities.

The high-fat meal consisted of eggs, biscuits, turkey sausage and gravy containing 60 grams of fat, either a palmitic acid-based oil high in saturated fat or the lower-saturated-fat sunflower oil. Both meals totaled 930 calories and were designed to mimic the contents of various fast-food meals such as a Burger King double whopper with cheese or a McDonald’s Big Mac and medium fries

The results showed that after just a single meal high in saturated fat, there was significant impariment in attention compared to a meal high in unsaturated fat. In addition, women with elevated endotoxemia markers at baseline performed worse on the postmeal cognitive test regardless of meal type. These results suggest that low-grade endotoxemia from the gut combined with dietary choices can have a significant negative effect on cognitive function.