This week, an exciting study of plant-based meat alternatives, fermented vegetables to fight COVID-19, avoiding frailty with aging, impact of gender on diet choices and how humans are increasing the risk of future pandemics.

HEALTHY AGING AND AVOIDING FRAILTY: This study reports data from the Whitehall study, an ongoing cohort established in the 1980’s following more than 10,000 British civil servants aged 35–55 years at recruitment. This analysis examined the association between 4 healthy behaviours at age 50 and risk of frailty in 6357 participants. The 4 factors were non smoking, moderate not excessive alcohol (1–14 units per week), consumption of fruits and vegetables at least twice per day and physical activity more than 2.5 hrs/week. Participants were followed for 20 years.

Frailty is associated with adverse health outcomes such as fractures, disability and increased mortality. On average we are spending the last 10 years of life in ill health. Simple lifestyle changes can help promote healthy aging and this study shows it’s never too late to start. I have previously highlighted the positive impact of a healthy diet for preventing frailty. An overall healthy diet pattern that is predominantly plant-based is the key with plant protein (not animal protein) and whole grains being important in addition to fruits and vegetables. 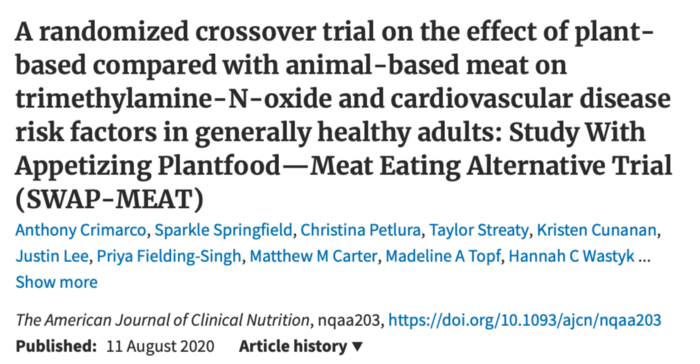 PLANT-BASED MEAT ALTERNATIVES (PBMA) AND CARDIOVASCULAR DISEASE (CVD) RISK FACTORS: We know that PBMA’s are better than eating animal meat for the environment and of course the animals. But to date there are very little data on the human health impacts. It has been suggested that these PBMA are ‘healthier’ as many are lower in saturated fat, don’t contain inflammatory animal protein and some have fibre too. However, most are still considered ultraprocessed foods, which we know can have detrimental health effects and many have a high sodium content. So its great to see a study that compares PBMA’s with meat and measures biomarkers related to CVD. The primary study outcome was differences in serum TMAO after 8 weeks of PBMA (Plant) compared to animal meat (Animal). Secondary outcomes were differences in fasting plasma IGF-1 concentrations, metabolic markers (blood lipids, glucose, and insulin), blood pressure, weight, and microbiota composition. Just to note, TMAO is generated from gut bacteria that convert choline and carnitine in eggs and meat to TMA, which later is converted in by the liver to TMAO. TMAO is implicated in the pathogenesis of atherosclerosis, hence heart disease and other CVDs. IGF-1 is a growth hormone that is implicated in the development of a number of cancers. Vegans and vegetarians have lower levels of both TMAO and IGF-1 compared to meat-eaters and have a lower risk of CVD and certain cancers.

The study highlighted was a single-site, randomised crossover trial with no washout period. 36 participants were instructed to consume ≥2 servings/d of Plant compared with Animal for 8 weeks each, while keeping all other foods and beverages as similar as possible between the 2 phases. All Plant products were supplied by Beyond Meat. All Animal products were supplied by a San Francisco–based organic foods delivery service; the red meat sources were grass-fed.

Compared to the organic, grass fed animal meat, PBMAs led to significant reductions in TMAO, LDL and body weight. It was interesting that the reduction in TMAO depended on the order of intervention with TMAO concentrations significantly lower for those that received the Plant diet second. A wash out period before the crossover may have been a useful part of the study to understand this order effect. Fasting concentrations of IGF-1, insulin, glucose, HDL cholesterol, and triglycerides, and blood pressure, were not significantly different between the Plant and Animal phases.

Now we have to be skeptical given the study was funded by an unrestricted grant from Beyond Meat. But here are some relevant points made by my friend and colleague Dr Conor Kerley;
1) Beyond Meat was not involved in study design or analysis of the data. 2) The lead author, Christopher Gardner, is a highly respected and experienced scientist and nutrition researcher 3) The study protocol, including statistical analysis, were published online before the study commenced 4) The results are entirely plausible 5) The study design is robust and the non-meat aspects of the diets were controlled for as much as possible in free living conditions 6) The study compared plant-based meat to animal-based meat, so they chose to compare like for like as much as possible. They could have biased the results by comparing plant-based meat to processed meats like bacon, sausage and deli meats for example, but instead chose to compare to organic, grass fed meat which would, at least in theory, give ‘better results’ than factory farmed meat or processed meat.

So all in all, these are encouraging results. Of course common sense tells us that the best diet is one composed of minimally processed whole plant foods and these newer processed PBMA’s should be kept to a minimum in the diet.

COULD CRUCIFEROUS AND FERMENTED VEGETABLES HELP TO REDUCE MORTALITY FROM COVID-19? This is the hypothesis proposed in this paper. A number of studies have suggested the dietary factors may be important in reducing the morbidity and mortality from SARS-CoV-2 infection. In part because unhealthy diets are associated with increased risk of chronic health conditions, including overweight/obesity, cardiovascular disease and type 2 diabetes that predict for a worse outcome. In addition, healthy diets centred around whole plant foods are better at supporting the immune system and reducing inflammation, oxidative stress, insulin resistance and enhancing endothelial dysfunction, all thought to be important for recovery from the virus. Based on ecological studies, countries consuming the most cruciferous and fermented vegetables have a lower death rate from COVID-19. A study in pre-print found that For each g/day increase in consumption of fermented vegetables of the country, the mortality risk for COVID-19 was decreased by 35.4%. A further study showed that the consumption of cabbage and cucumber reduced the risk of death from COVID-19. These studies are hypothesis generating but can not yet prove a direct effect.

The highlighted review proposes plausible mechanims by which fermented and cruciferous vegetables may be important. Within fermented foods there are live bacteria and it is particularly the Lactobacillus species that are dominant. These bacteria have been associated with improved gut health, immune function and reduced inflammation and oxidative stress. Cruciferous vegetables also have potent anti-inflammatory and anti-oxidant effect in part due to the generation of sulforaphane. Both fermented and cruciferous vegetables are thought to act by upregulating the transcription factor Nrf2. The proposed mechanisms of action are shown in the image below. 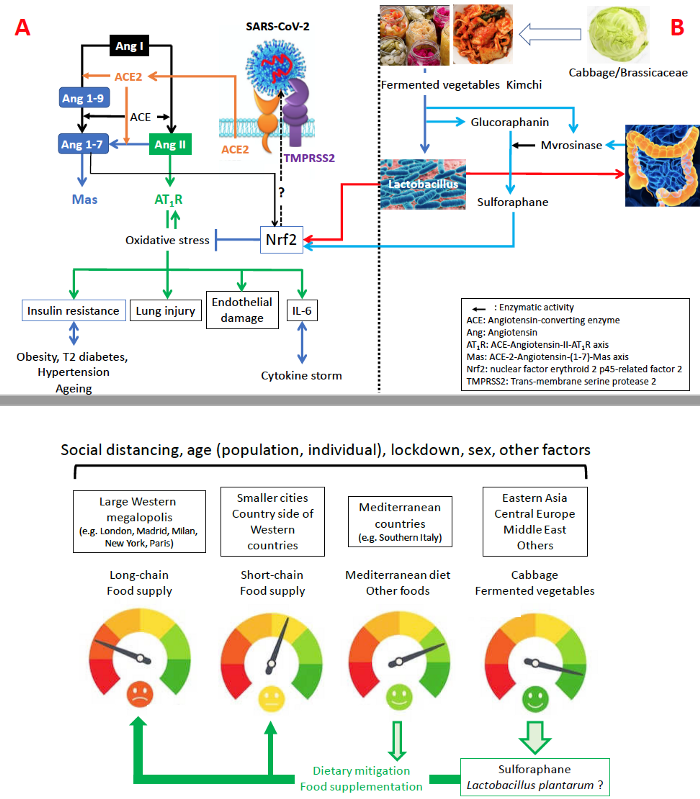 Although no recommendation can be made from these early data, the consumption of both fermented vegetables and cruciferous vegetables are definitely good for general health. So no harm in loading up on cabbage, kale, broccoli and cauliflower or kimchi, sauerkraut and water kefir, whilst we await further data. 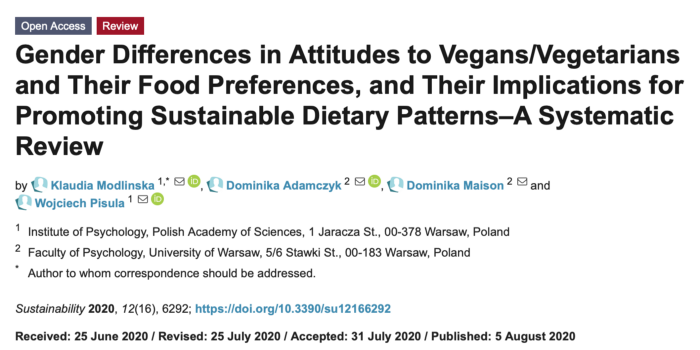 GENDER DIFFERENCES IN ATTITUDES TO VEGAN/VEGETARIAN DIETS: This is an interesting narrative review of 29 studies highlighting gender differences in attitudes to plant-based diets. Intuitively, these differences are often obvious to vegetarians and vegans, but it is interesting to see how they are supported by the scientific literature. The hypothesis of the study was ‘that men and women differ significantly in their preferences for plant products and in their attitudes toward meat consumption’. The finding include; 1) Omnivorous men have a more negative attitude towards vegetarians than omnivorous women. This may be because men associate eating meat with masculinity. 2) Vegetarian men are perceived by others as less masculine than omnivorous men. Vegetarian men also encounter hostility in their social group more often than women do 3) When dating, women preferred omnivorous men, rated them as more attractive and felt more positive about them than about vegetarians 4) Regarding social support, female vegetarians claimed to know more people who were vegetarians, but they did not have more vegetarians among close friends. Mothers of young children are often concerned about the negative social consequences of their children’s vegetarianism. In an analysis of internet forum posts, mothers of vegetarians or vegans were concerned that their children could encounter difficulties in adhering to their diet in kindergarten or at children’s birthday parties. 5) Across Western societies, women are twice as likely as men to be vegan or vegetarian 6) Men more often than women believe that they will not enjoy the taste of vegetarian meals and are more likely to associate health with eating meat 7) In the general population, women have been found to be more concerned about animal rights and ethics, representing around 75% of animal activists. There is much more detail in the paper for those wishing to better understand these gender differences.

We are aware that social and cultural factors are important in diet choice and in the Western world the dominant model is still one in which meat consumption is linked to wealth, high social status and dominance. This study highlights gender differences in attitudes, which appear to be meaningful and significant. The study concludes ‘It seems that one of the key issues in effective campaigns promoting plant-based food are the differences between men’s and women’s attitudes to veganism/vegetarianism. Failing to take into account those widespread and relatively stable differences may hinder the effectiveness of such efforts’.

HUMAN DESTRUCTION OF WILDLIFE HABITATS INCREASES THE RISK OF INFECTIONS WITH PANDEMIC POTENTIAL: This comprehensive analysis shows that as humans convert wild habitats to farmland or land for human use, this increases the risk of zoonoses (infection caused by an infectious agent that has jumped from a non-human animal to a human) and hence pandemic infections. The study assessed almost 7000 animal communities on six continents and found that the conversion of wild habitats for human use, be it farming or urbanisation, wiped out large animal species and increased the numbers of bats, rats and certain birds. These smaller, more adaptable animals that can reproduce quickly also carry the most pathogens that can pass to humans. Animals carrying zoonotic diseases were 2.5x greater in degraded compared to non-degraded ecosystems. The analysis clearly shows that as the world’s population grows and consumption increases, there is increasing destruction of natural habitats and ecosystems with loss of biodiversity. This leads to changes in animal populations, brings certain animals closer to humans and increases the risk of pandemic infections.

There have been calls by the WHO and the UN environment programme to not only treat the symptoms of the current pandemic but the route cause. Without that, future pandemics are inevitable. A recent report estimated that actions required to prevent future pandemics would cost just 2% of the costs of the actual COVID-19 crisis.

We have been warned. We must demand action from those who can implement policy change. As individuals we can strive to make the necessary personal choices, such as shifting to a plant-based diet, consuming less material goods in general, flying less, eliminating plastic use and reducing our own personal contribution to environmental pollution (just a few suggestions).