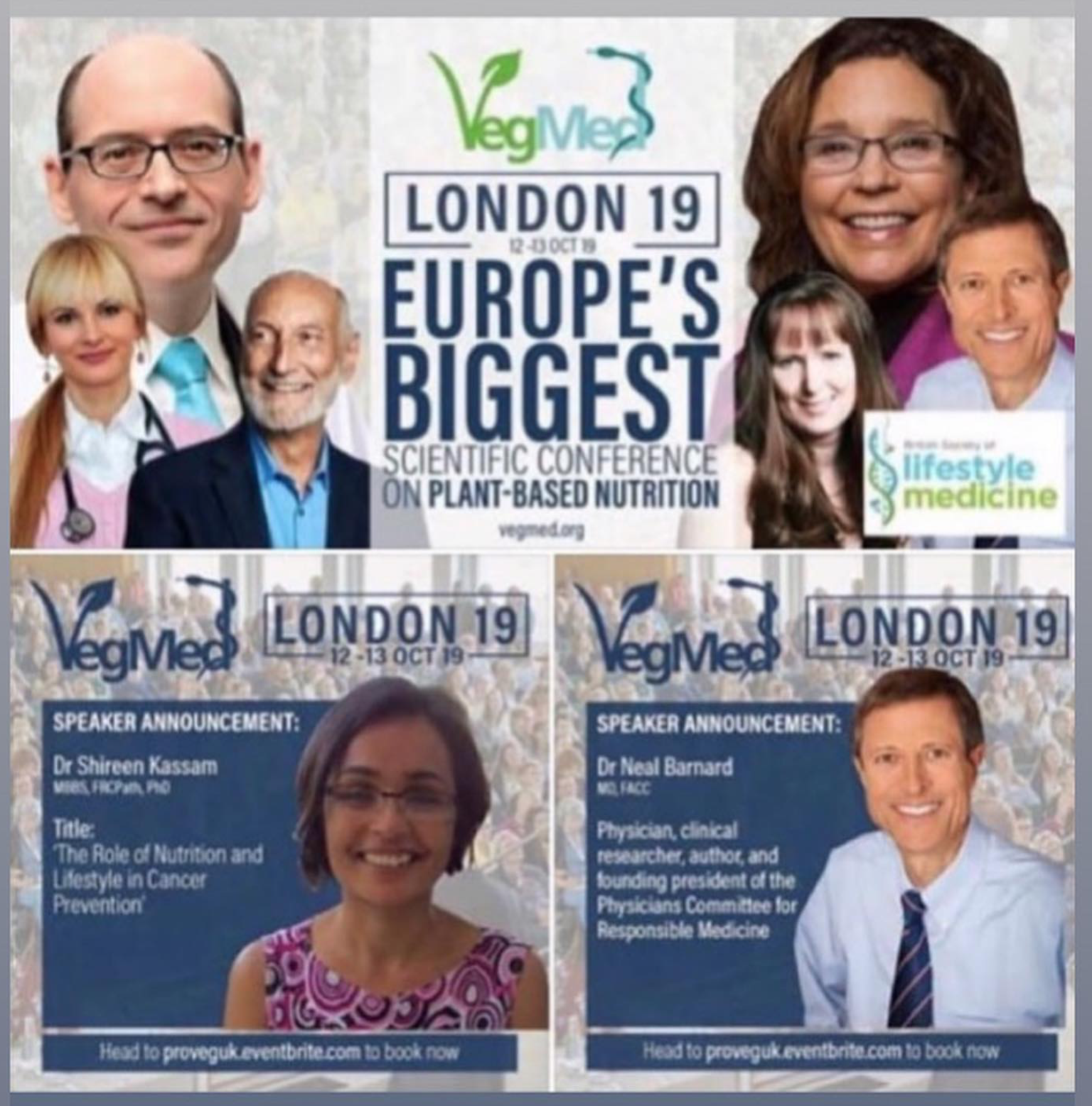 What an incredible 10 days for plant-based health professionals UK. Our first international conference. We partnered with ProVeg to bring the very successful VegMed conference from Berlin to London on October 12/13th 2019. It did not disappoint. We hosted 4 international pioneers of the plant-based nutrition movement — Dr Neal Barnard, Dr Michael Klaper, Dr Michael Greger and Brenda Davis RD. They shared their decades of experience of using plant-based diets to prevent and reverse chronic disease. Members of the PBHP UK team also shared their knowledge on topics which included cancer, inflammatory bowel disease, plant-based diets for children and obesity. The audience had come from all corners of the world, including Germany, Russia, Belgium, Barbados, Chile, Australia, Greece to name a few. It was an immense privilege to be part of such an inspirational event. 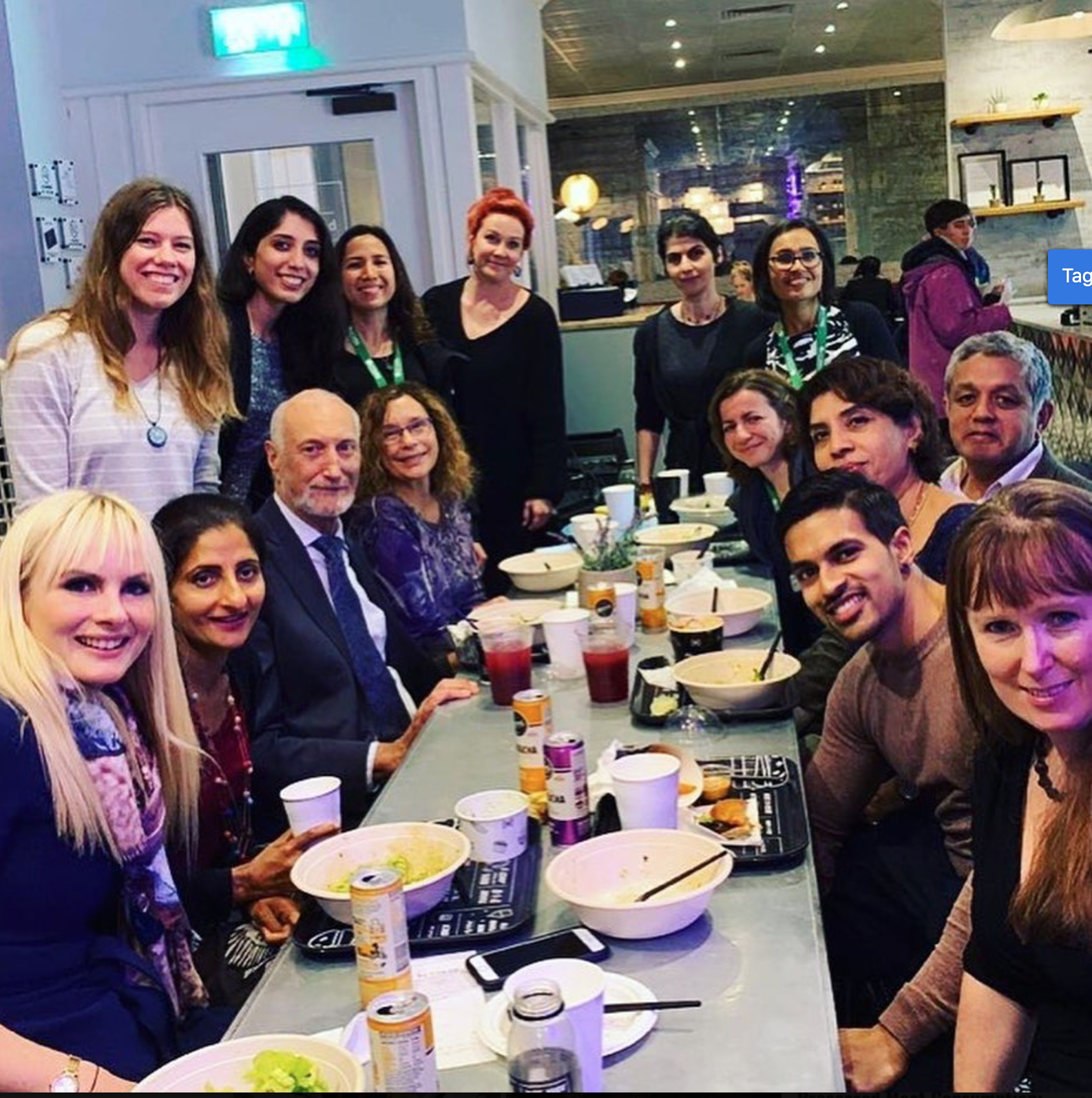 Dinner after the VegMed conference at by Chloe with other vegan doctors of the UK (plus a couple of plant-based superstars!)

I had the immense privilege of sharing the stage with Dr Caldwell Esselstyn, his wife Ann and Brenda Davis RD, for the first conference on vegan health to be held in Reykjavik, Iceland. A packed audience of 350 people came to hear about the impact of plant-based diets on health and well-being. The conference was organised by Elin Skuladottir who shared her story of transitioning to a whole food plant-based diet after a diagnosis of breast cancer. The conference covered the role of diet in prevention of cardiovascular disease and cancer and how to ensure a plant-based diet is nutritionally optimal. Dr Esselstyn has treated over 1000 people over the last 35 years with cardiovascular disease, including many with severe coronary artery disease. Those that adhere to the programme have virtually 100% success in reversing their symptoms of cardiovascular disease, be it angina, hypertension or peripheral vascular disease and some even reverse coronary artery atherosclerosis. One of the key features of the diet is its ability to lower the total and LDL cholesterol to a level whereby coronary artery disease is no longer possible (usually a total cholesterol of less than 3.8 mmol/l). This is only possible with a no oil whole food plant-based diet. In those who are very overweight and have difficulty losing weight Dr Esselstyn recommends 2 days a week of water only fasting and avoidance of all foods containing flour, even whole grain flour. I share Dr Esselstyn’s view point that it must now be considered negligent to not share the power of whole food plant-based nutrition with patients who have cardiovascular disease. Not everyone will be willing to shift to a 100% plant-based diet but it must nonetheless be offered as an alternative or adjuvant to conventional medical and surgical treatment. 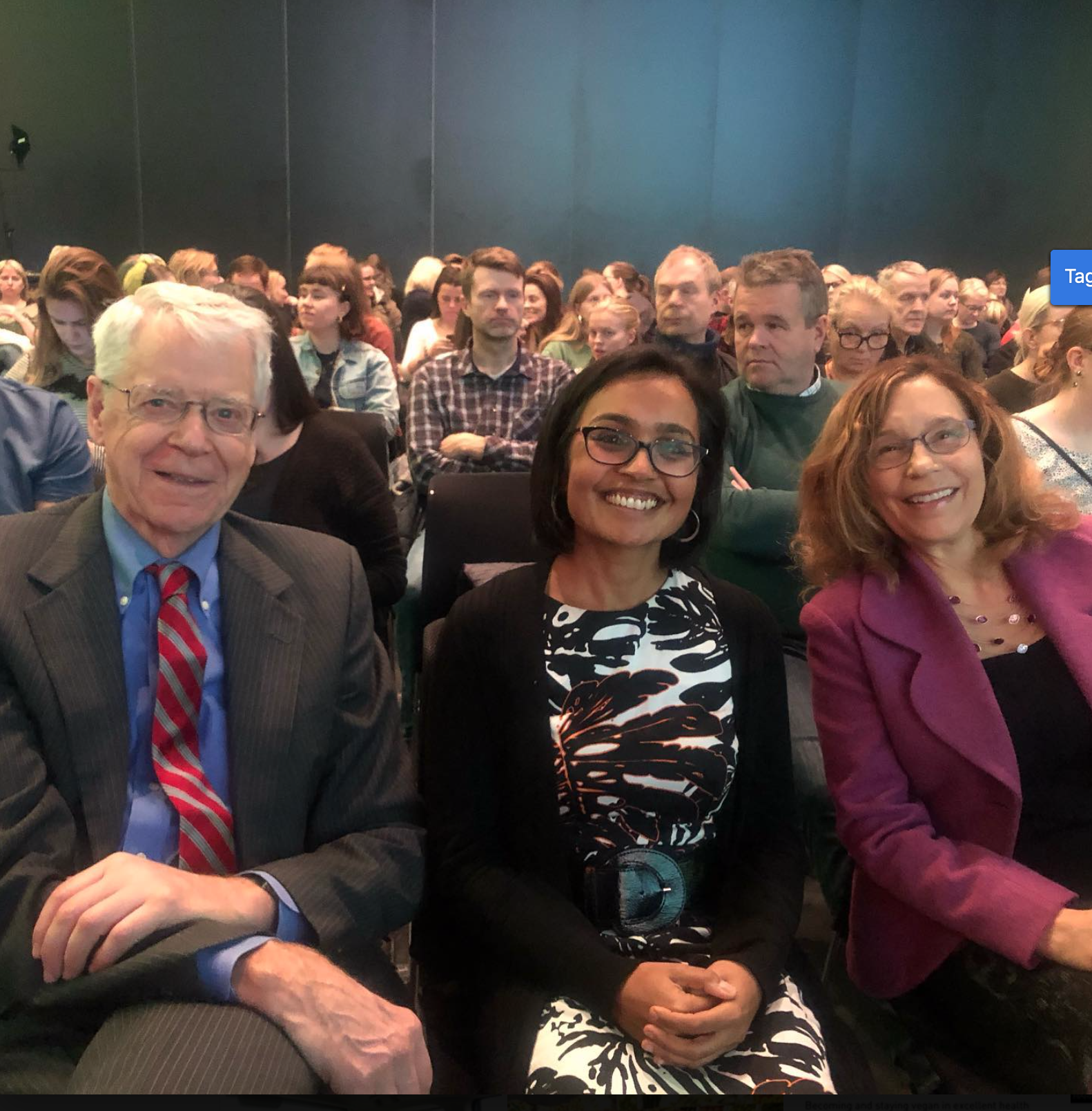 Brenda Davis is probably the worlds most famous vegan dietitian. Vegan for 30 years. When she became vegan there was no information for dietitians on vegan diets and so she wrote, with her co-author Vesanto Melina, some seminal books, including their most well known ‘Becoming Vegan’. When this was published, they both faced criticism from their professional body as there was much resistance to vegan diets at the time. Despite the push back, Brenda has continued to provide accurate and scientifically sound information on vegan diets for 3 decades. She is now writing her 12th book.

Back to the science. Globally, the number of people living with dementia is rising, which is challenging healthcare systems all over the world. However, we known that health lifestyle behaviours could prevent around one third of cases. The WHO has produced guidelines for reducing the risk of cognitive decline and dementia. With regards to diet, the recommendation is to eat a diet rich in fruits, vegetables, whole grains and legumes whilst limiting saturated fat from animal foods, processed foods and added sugar. This study assessed the impact of diet quality in middle age on the risk of cognitive impairment in 16,948 men and women from the Singapore Chinese Health Study aged 45–74 years at baseline (1993–1998) who were then reinterviewed 20 years later. Diet quality at baseline was assessed according to the alternate Mediterranean diet (aMED), the Dietary Approaches to Stop Hypertension (DASH) diet, the alternative Healthy Eating Index (AHEI)-2010, overall plant-based diet index (PDI), and healthful plant-based diet index (hPDI). All these healthy diet patterns/scores have in common high intakes of whole plant foods and low intakes of saturated fat and processed foods. Those participants that scored highest on all 4 diet scores had significantly reduced incidence of cognitive impairment — in the order of 20–30% reduced risk. This is not surprising given that diets centred around whole plant foods are associated with a lower risk of chronic disease, in particular, reduced risk of cardiometabolic diseases, which increase the risk of dementia in later life. The mechanisms by which plant-based or plant-strong diets reduce chronic disease and dementia is likely through reduced oxidative stress and inflammation, key processes involved in the development of dementia. 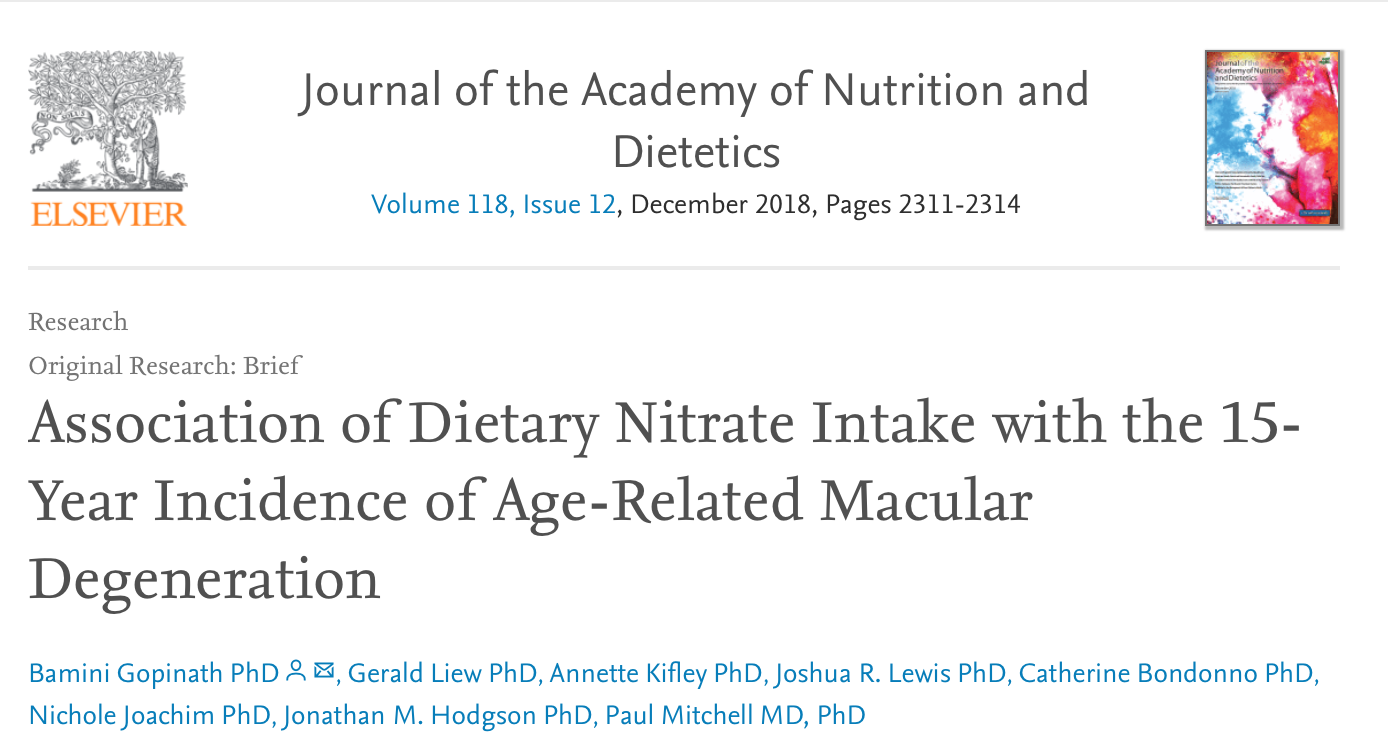 Dietary nitrates from green leafy vegetables could help reduce the risk of developing age-related macular degeneration (AMD). Researchers at the Westmead Institute for Medical Research interviewed more than 2,000 Australian adults aged over 49 years and followed them for a 15-year period. The research showed that people who ate between 100 to 142 mgs of vegetable nitrates each day had a 35% lower risk of developing early AMD than people who ate less than 69mgs of vegetable nitrates each day. This is the first time the effects of dietary intake of nitrates on macular degeneration has been measured and incorporating foods like green leafy vegetables and beetroot could be a simple way to reduce the risk of early macular degeneration. Dietary nitrates are converted to nitric oxide which plays a critical role in the maintenance of normal endothelial cell function and vascular tone, influencing blood pressure and blood flow. The research did not show any additional benefits for people who exceeded 142mgs of dietary nitrate each day. It also did not show any significant connections between vegetable nitrates and late stage AMD, or between non-vegetable nitrates and AMD risk. Spinach has approximately 20mg of nitrate per 100g, while beetroot has nearly 15mg of nitrate per 100g.

Higher consumption of dietary nitrates from vegetables has been associated with lower blood pressure and a randomised study of beetroot juice in those with elevated blood pressure demonstrated similar efficacy to blood pressure lowering medications. Dr Esselsytn’s programme of heart disease reversal requires patients to chew leafy greens as a snack 6 times a day since nitric oxide production from dietary nitrates is required to heal the damaged endothelium of the coronary arteries. 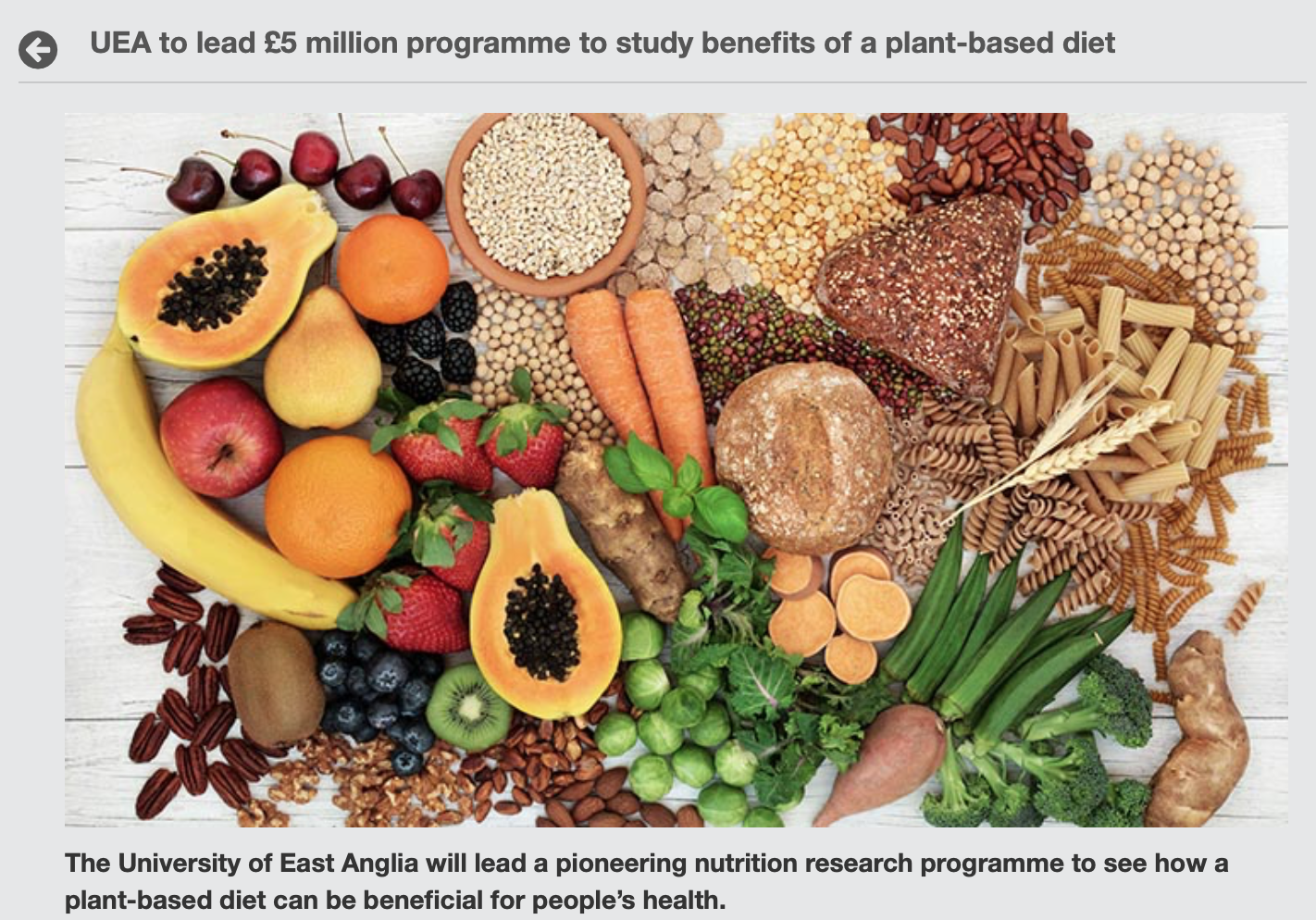 Plant-based nutrition research in the UK. It is exciting to hear that researchers at University of East Anglia are undertaking research into plant-based nutrition and health. There are a number of PhD programmes available starting October 2020. To date, there has not been much research in the field of healthy plant-based diets from the UK. The exception being the EPIC-Oxford study, which is one of the largest cohort studies to examine the health of vegetarians and vegans. However, this is a purely observational study and not all participants were eating optimal plant-based diets. This new research programme promising to provide data on the role of health plant-based diets in improving the health of the nation. 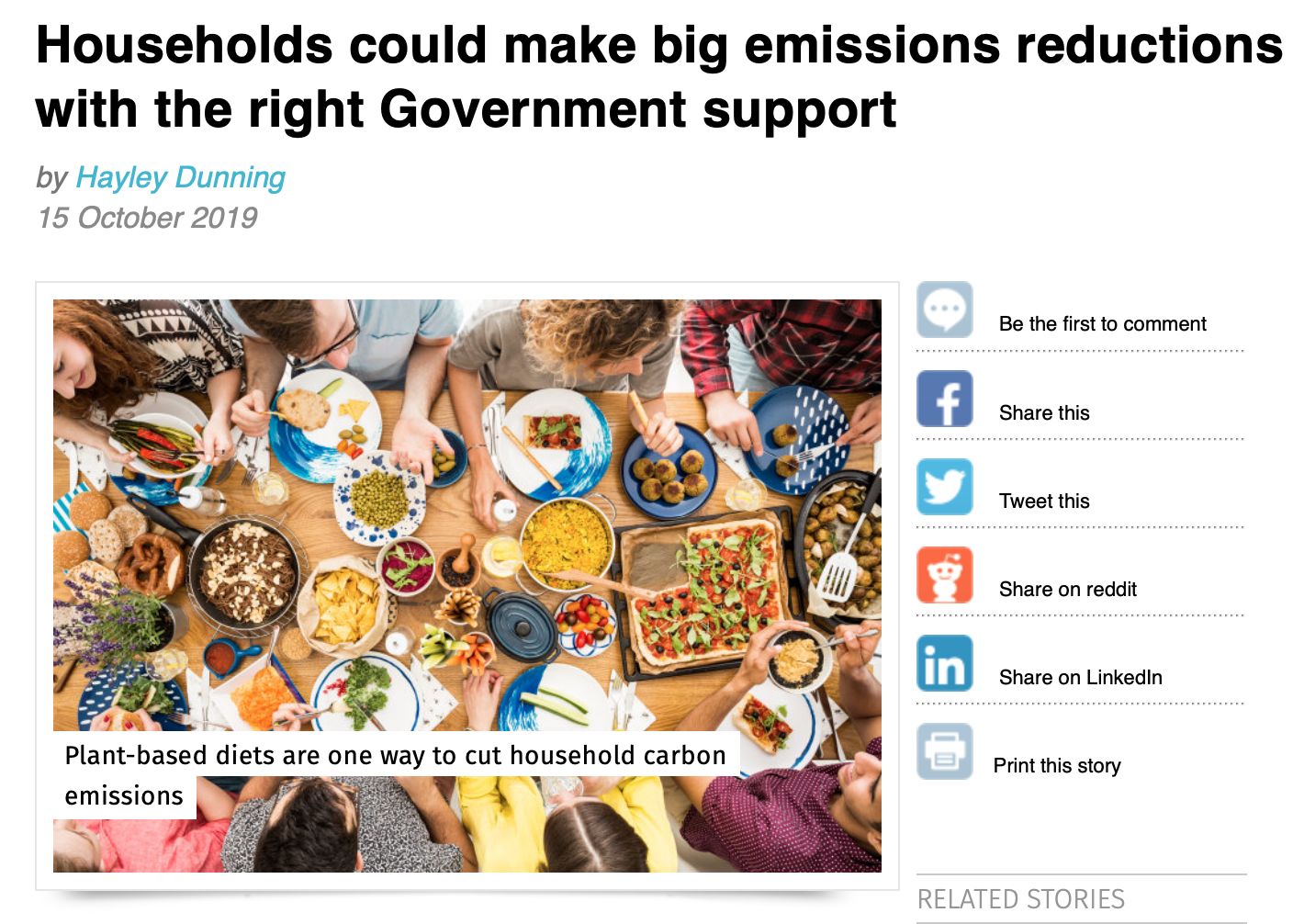 An independent report for the UK Committee on Climate Change by an Imperial expert recommends policies that include helping people to shift to more plant-based diets. The reports author, Dr Richard Carmichael, recommends reducing barriers to plant-based diets, including increasing choice by making sure at least one plant-based (vegan) option is available to anyone every day on all public-sector menus and training catering staff in plant-based cooking skills. This is in recognition of the fact that animal agriculture is the single most important contributor to climate change and is one of the few areas in which individuals can make an important contribution.

If you have found this useful please follow my organisation ‘plant-based health professionals UK’ on Instagram @plantbasedhealthprofessionals and facebook. You can support our work by joining as a member or making a donation via the website.