Another media story caused a storm and worry amongst those parents raising vegan children. The story relates to new guidelines published by Healthy Eating Research, a national program of the Robert Wood Johnson Foundation in the U.S. These guidelines have been endorsed by four major health organisations in the U.S. — Academy of Nutrition and Dietetics, American Academy of Pediatric Dentists, American Academy of Pediatrics, American Heart Association. The guideline covers all drinks, not just cow’s dairy and plant-milks, and thus makes several sensible recommendations. For example, they recommend avoiding flavoured milks, sugar-sweetened and artificially-sweetened beverages in children. Also, to avoid fruit juice in very young children and limiting in older children.

However, in my view the recommendation for the avoidance of plant-based milks is rather controversial and not evidence based. Needless to say, when you read the actual document, it is acknowledged that soya milks are a recognised, suitable alternative to cow’s milk. To suggest however that cow’s dairy is an essential drink for all or most children is just not factually correct for the following reasons: 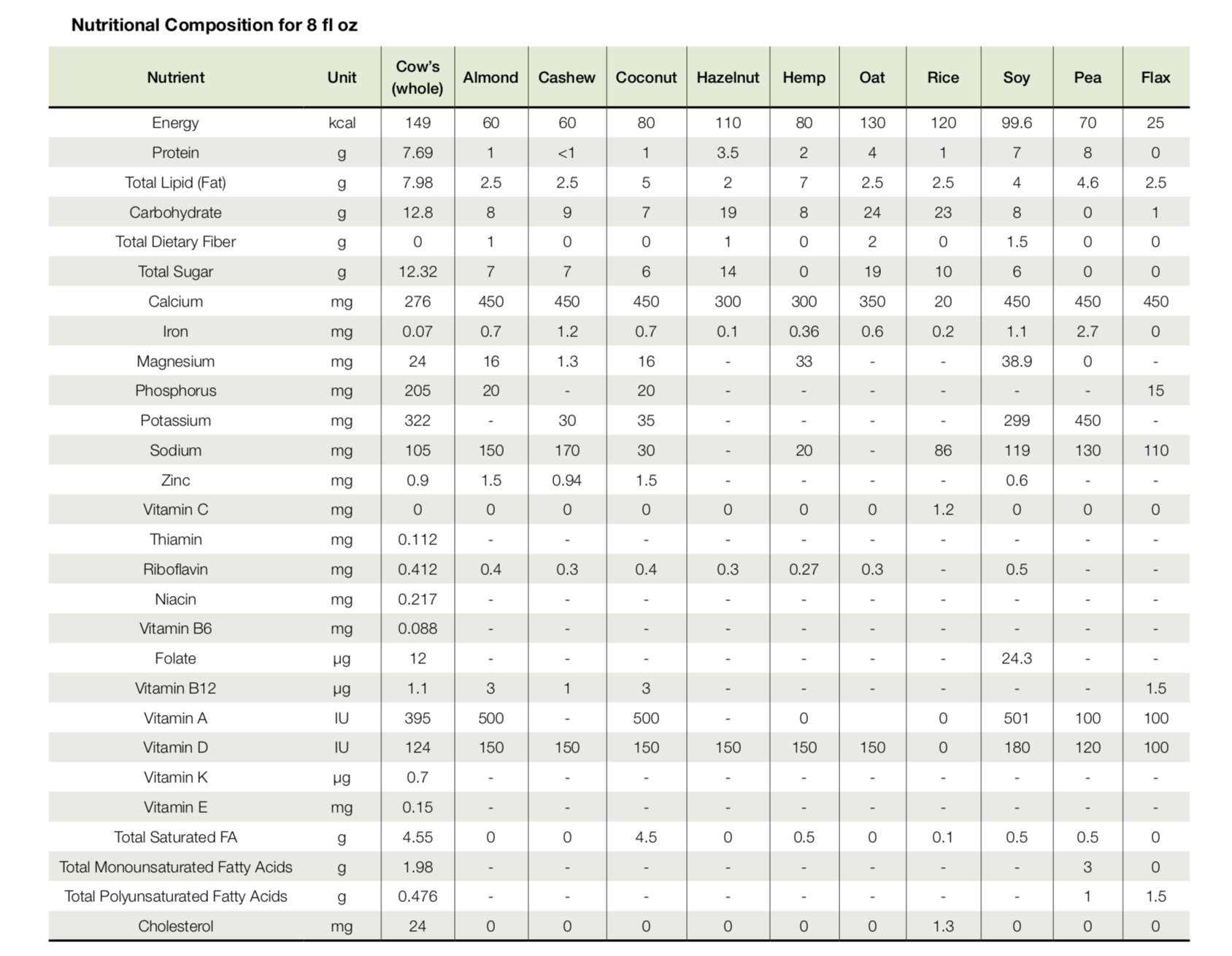 7) In a short video from PCRM, Dr Neal Barnard explains the conflict of interests and that those organisations endorsing the guidelines are receiving funding from the dairy industry. The American Academy of Paediatrics have also recently come under attack for supporting the continued availability of chocolate flavoured milk in U.S. public schools, suggesting this may be a consequence of their ties to the dairy industry. PCRM have demanded that the American Heart Association withdraw their support from these healthy drinking guidelines.

8) The guidance fails to discuss the associations between dairy consumption and illnesses such as eczema, asthma and acne. There diseases are on the rise in Western societies. Even though the causes are multi-factorial, dietary factors are heavily implicated. 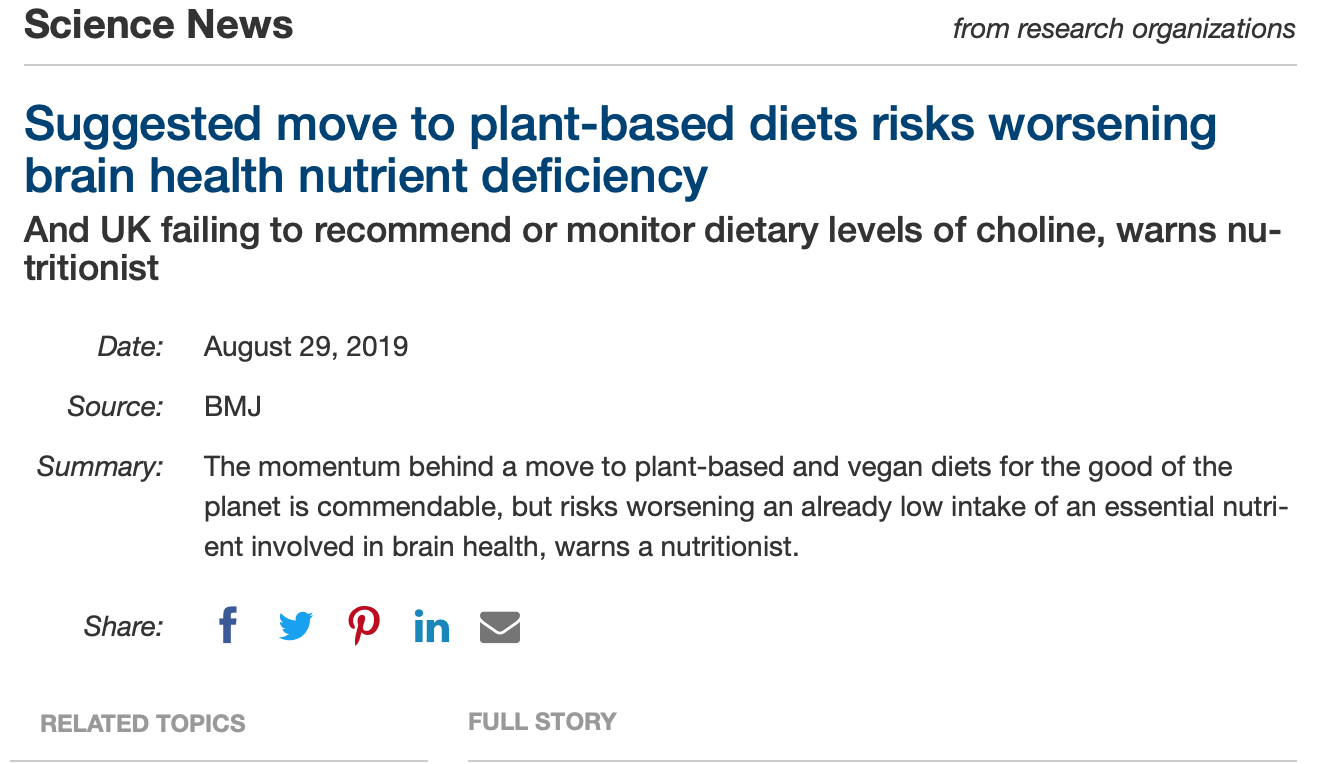 Choline and health outcomes. I am returning briefly to the story that hit the media headlines at the end of August. It suggested that those following plant-based diets are at risk of choline deficiency. This was based on an opinion article by Emma Derbyshire, member of the meat advisory panel, written in BMJ nutrition (note that after publication she added her meat industry affiliation when we and others wrote to the BMJ in protest). High levels of choline are found in meat and eggs but many plant foods also contain choline, mostly at lower levels. But what do we actually know about choline consumption and health. The data at present is quite mixed with studies showing both positive and negative associations with health outcomes. A recent study published online provides population data from the National Health and Nutrition Examination in the US (20,325 participants) plus a systematic review and meta-analysis of prospective data on choline consumption and mortality (149,491 participants). The data show that higher consumption of choline was associated with a higher risk of all cause, cardiovascular and stroke mortality. Higher consumption also resulted in a worse lipid profile and glucose regulation and increased the risk of type 2 diabetes. Why might this be? Choline from meat sources is converted in the gut to TMA and then in the liver to TMAO, which is implicated in the pathogenesis of atherosclerosis, heart failure, type 2 diabetes and renal failure. High choline can reduce levels of homocysteine, another risk factor for cardiovascular disease. The associated worse lipid profile could also be contributory. So, there is no actual evidence that high consumption of choline from meat and eggs is beneficial and the opposite may be true. 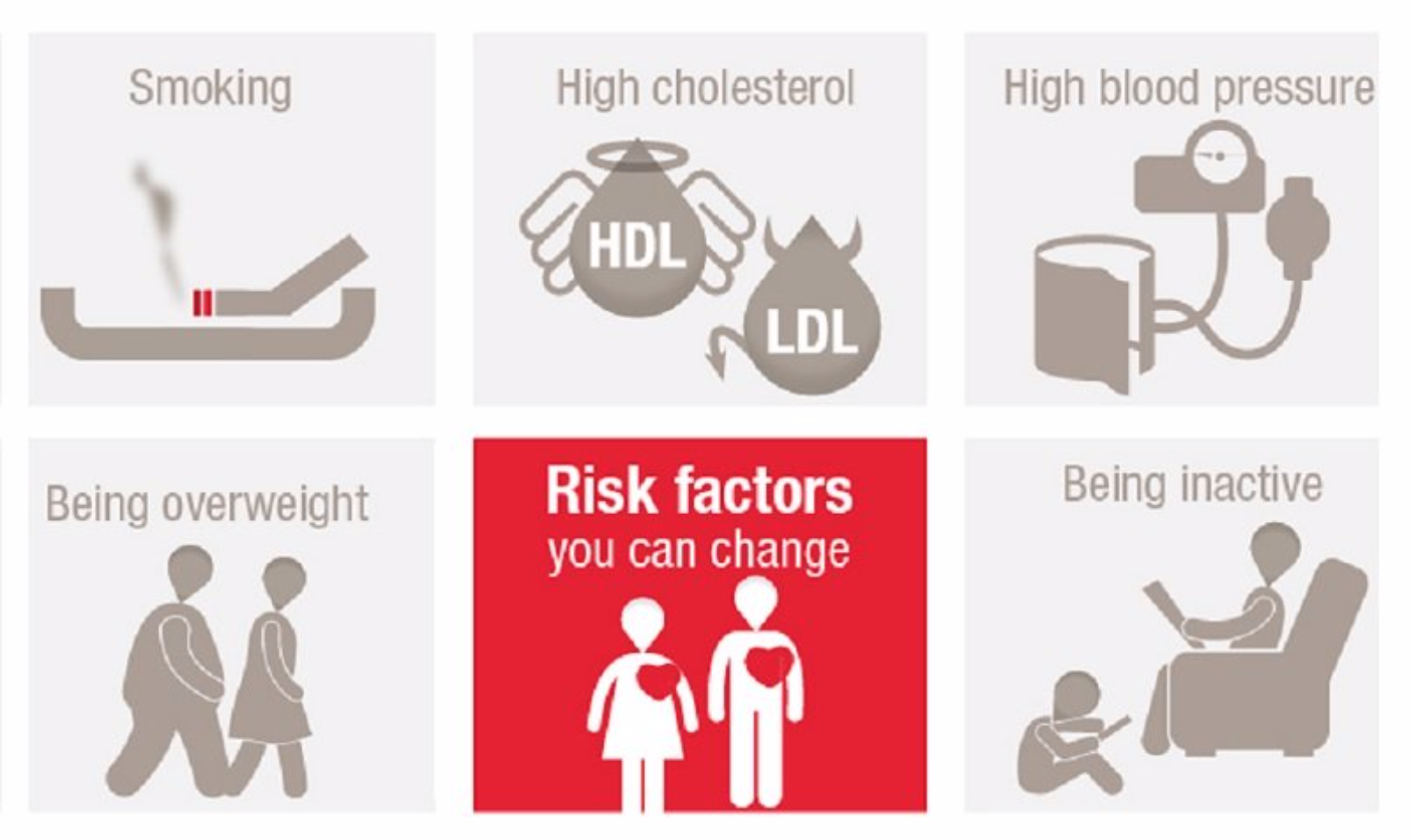 Dietary patterns and cardiovascular outcomes. The Diabetes and Nutrition Study Group (DNSG) of the European Association for the Study of Diabetes (EASD) conducted a review of existing systematic reviews and meta-analyses to explain the relationship between different dietary patterns and cardiometabolic outcomes. The paper summarizes the evidence for the Mediterranean, Dietary Approaches to Stop Hypertension (DASH), Portfolio, Nordic, liquid meal replacement and vegetarian dietary patterns. All these diet pattern have common foods groups and are high in fruits, vegetables, whole grains and legumes. The DASH diet includes low fat dairy and lean meats, The Mediterranean diet emphasises olive oil, fish and red wine, the Portfolio diet is a plant-based diet that emphasise 4 cholesterol-lowering food groups. The vegetarian diet pattern includes lacto-ovo and vegan diets that exclude all meat and the Nordic diet pattern emphasises whole plant foods but includes lean meats and seafood and the use of canola oil as a source of unsaturated fat.

Thus vegetarian and vegan diets have the potential to improve cardiovascular outcomes in people with and without diabetes if they emphasise vegetables, fruits, whole grains and legumes. These benefits are thought to be due to the low consumption of saturated fat and the higher consumption of fibre, anti-oxidants, plant protein (as compared to animal-derived protein) and phytochemicals. In addition, all the diet patterns examined include the four individual food components that are specifically emphasized under the Portfolio dietary pattern: plant/sterols/stanols, viscous fibers, plant protein, and nuts. The benefits may therefore derive from the fact that plant sterols/stanols inhibit the absorption of cholesterol in the small intestine. Viscous fibre increases the rate of bile acid excretion and the production of short-chain fatty acids in the colon, and may reduce LDL cholesterol levels by affecting cholesterol synthesis. Plant protein may act as a vehicle for the plant sterols/stanols and viscous fiber, or other antiatherogenic agents and certain amino acids common in plant proteins may decrease cholesterol levels. The effects of nuts such as almonds, likely stem from the nutrients they provide since they contain phytosterols, fibre, and plant proteins. 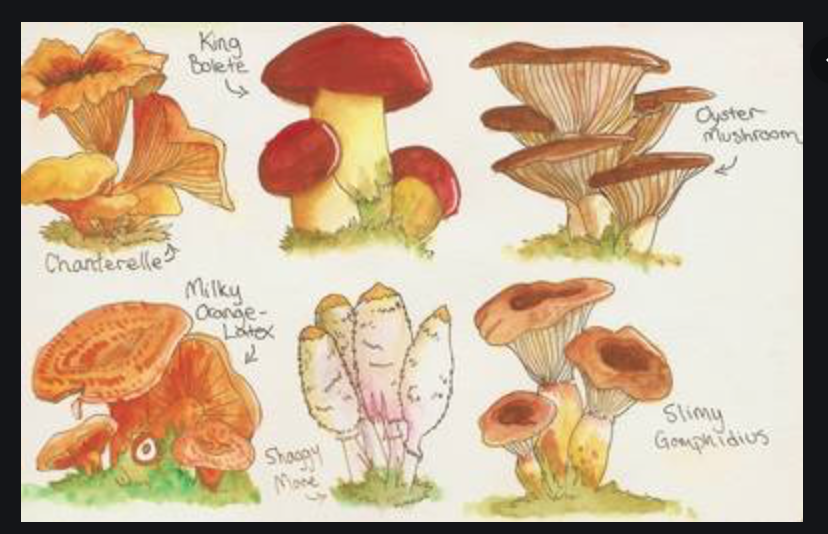 Mushroom consumption and health outcomes. This may be disappointing to those of you mushroom lovers. The results of the largest prospective study to date on mushroom consumption and health outcomes does not find a benefit for mushroom consumption. A total follow-up of >100,000 health professionals from 1986 until 2012 found no effect on cardiovascular disease (CVD), stroke, or diabetes risk when comparing mushroom intake ≥5 times/wk with intake of <1 time/mo. In addition, no effects of mushroom intake were observed in a subset of ∼15,000 men and women on biomarkers of health, including blood lipids, C-peptide, and several markers related to inflammation. Of course these results may still be false-negative given the inherent issues associated with observational studies and the effects of residual confounding. Thus if mushrooms are eaten as part of a typical English breakfast with bacon and sausages then a health benefit will not be seen. In contrast if mushrooms are eaten as part of a healthy plant-based diet then benefits are more likely to be apparent. The paper does not elaborate on any associations of mushrooms with other foods. All this being said, mushrooms are a nutritious and healthy plant food forming an important food within a plant-based diet. Mushrooms form part of the daily foods recommended by Dr Joel Fuhrman, a pioneer of ‘food as medicine’ , who coined the G-BOMBS acronym for foods that should be eaten on a daily basis. Mushrooms are packed with nutritional value. They are low in calories, are great sources of fibre and protein. They also provide many important nutrients, including B vitamins, selenium, potassium, copper, and (particularly when exposed to the sun) vitamin D. So, despite the results of this study, mushrooms should remain part of a healthy plant-based diet.