This week’s review highlights some benefits of the Mediterranean diet pattern. There is also less good news around the health of our children and the planet.

ADOLESCENT OBESITY AND RISK OF CANCER IN MIDLIFE: This large study from Israel on adolescent BMI (body mass index) and cancer risk (2.3 million participants, 55000 cancer cases) suggests higher adolescent BMI is associated with an increased risk of 13 cancers in men and 10 cancers in women. There was some increase in risk even within the high normal BMI range. The increased risk of cancer starts as early as 30 years of age and several associations were stronger in the participants that were recruited more recently into the study than at the beginning of the study, probably reflecting a more obesogenic environment over time. Cancer incidence increased gradually across BMI percentiles with a 26% increased risk among men with adolescent obesity. Among women, an inverse association was found between obesity and risk of cervical and breast cancers. When these cancers were excluded, there was a 27% increased risk of cancer among women with adolescent obesity. Adolescent obesity was also associated with poorer survival after a cancer diagnosis.

Conclusion: ‘Our study indicates that adolescent obesity is a major risk factor for cancer incidence in young and mid adulthood. Given the global increase of obesity in childhood and adolescence, the cancer burden among young adults is expected to increase’.

Data from Cancer Research UK suggest that by 2043, obesity will be the leading preventable cause of cancer among women, replacing smoking as the leading cause of most cancers. Diet really is the main determinant of body weight and sadly our obesogenic food environment is having a deterimental effect on the health of children. Weight gain throughout life is less likely on diets centred around whole plant foods that also minimise the consumption of processed and ultra-processed foods as highlighted in a recent paper from the Nurses’ Health Study and the Health Professionals Follow-up Study. 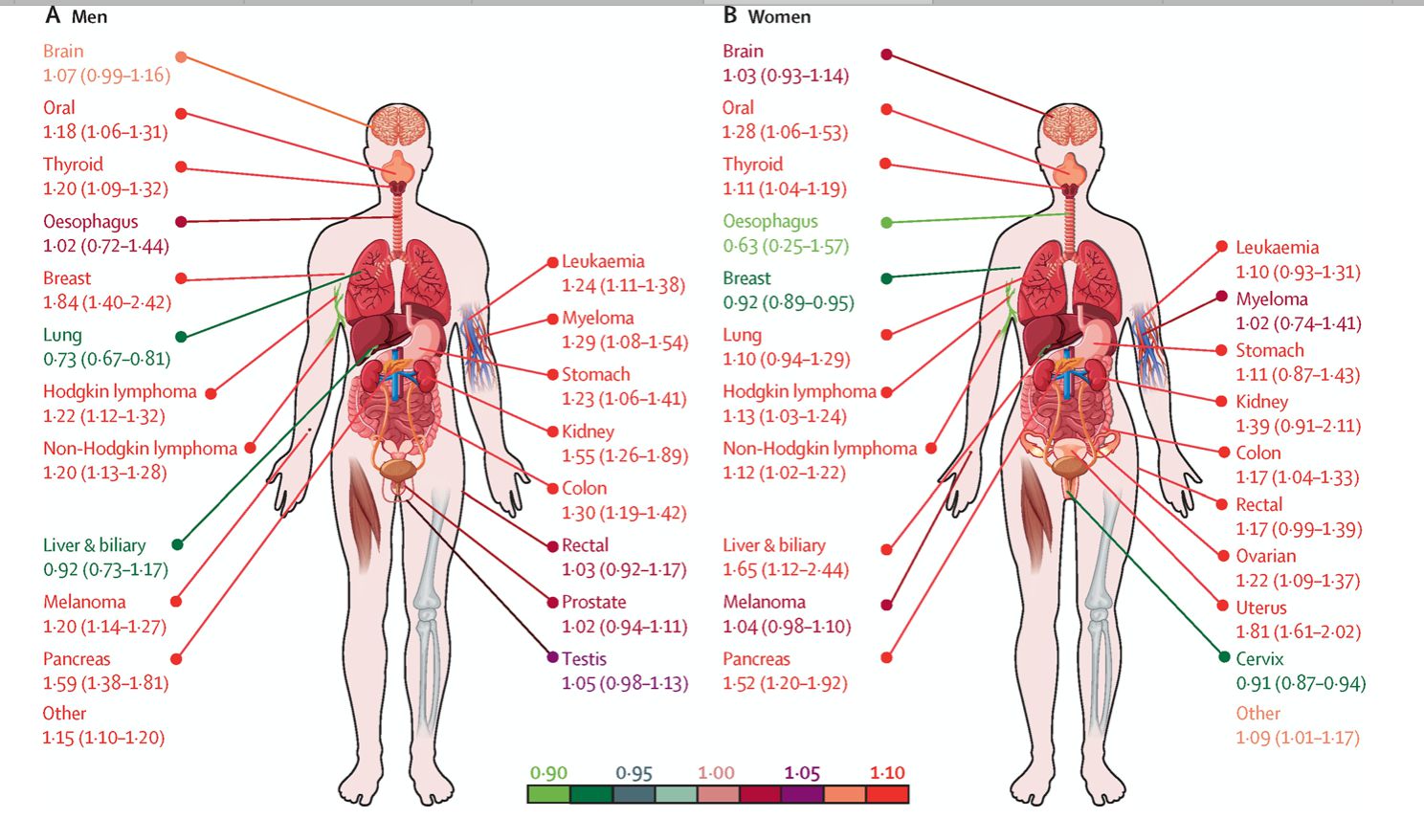 THE MEDITERRANEAN DIET FOR REDUCING FRAILTY: Frailty is a complex physiological process that includes the development of chronic low-grade inflammation (ie, inflamm-ageing), cognitive decline, sarcopenia and the development of chronic diseases like diabetes and atherosclerosis. There is no straight forward solution to this problem, which is often exacerbated by poly-pharmacy. A dietary and lifestyle approach is attractive given the lack of side-effects and low cost. This study examined the effect of a Mediterranean diet intervention in 612 participants with a median age of 71 years in 5 different European countries for 1 year. The study examined changes in the gut microbiome and biomarkers of frailty and inflammation. The results showed that the diet intervention led to beneficial changes in the gut microbiome and this was associated with a beneficial change in biomarkers of frailty, cognitive function and inflammation.

Although this study does not provide data on actual physical and cognitive functioning in the participants, it does provide proof of concept. Firstly, that a year long dietary intervention is possible in older individuals across different countries and secondly, a diet intervention has the potential to improve health and well-being in the context of frailty (although these participants themselves were not classed as frail). 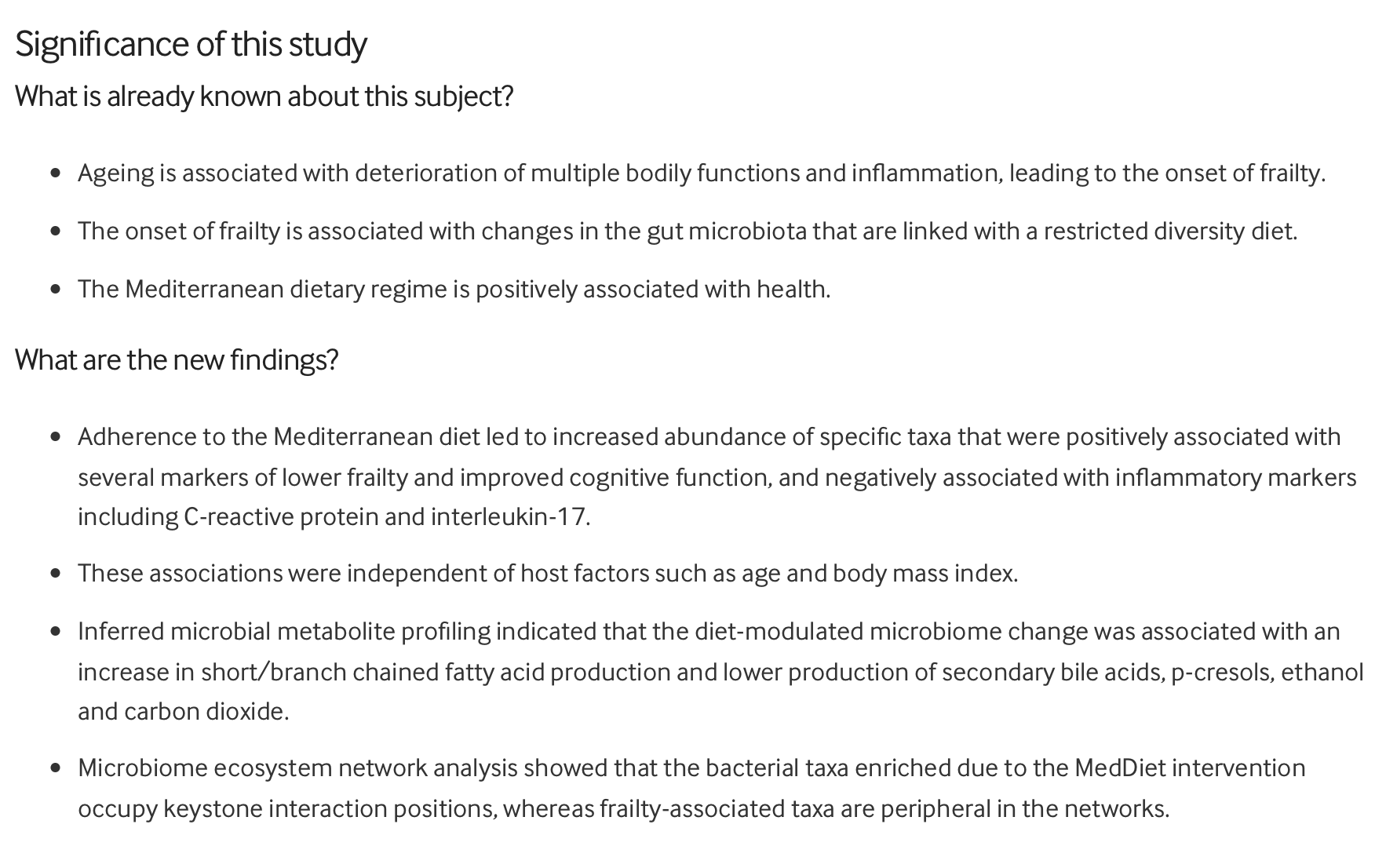 Given that CD is thought to be caused by an abnormal immune response to an abnormal gut microbiome in those who have a genetic predisposition, a dietary approach is an attractive option for prevention and treatment. So far we have data from prospective cohort studies such as the Nurses’ Health Study and the EPIC study that dietary fibre may protect against CD. There is also an increasing number of reports suggesting a beneficial role of plant-based diets for the treatment of CD.

The Mediterranean diet is plant strong and emphasises the consumption of vegetables, legumes, fruits, nuts, olive oil and fish and low consumption of red meat, dairy products and saturated fats. This type of diet pattern has been associated with a number of health benefits including a reduced risk of cardiovascular disease, type 2 diabetes, cognitive impairment, certain cancers and reduced risk of death from all causes. It has also been shown to reduce inflammation, benefit the gut microbiome and enhance the functioning of the immune system. 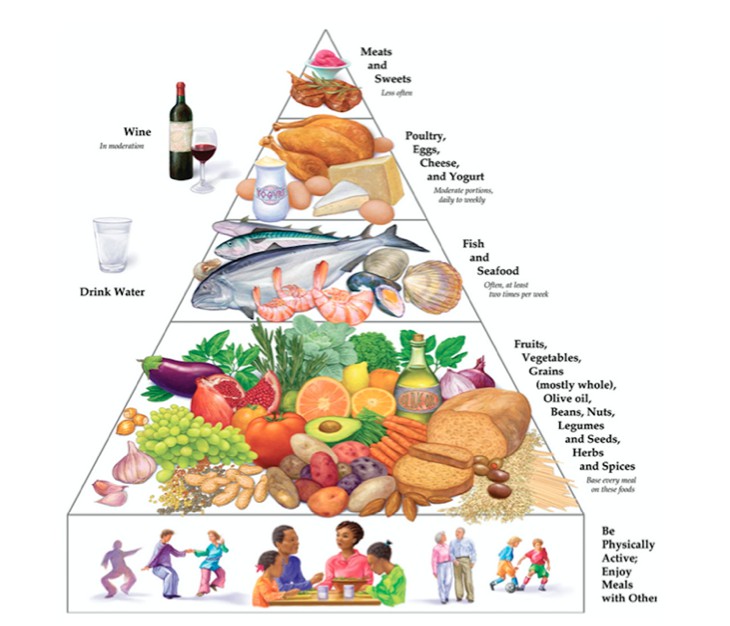 There have not been many comparisons of the Mediterranean diet with a vegetarain or vegan diet. The CARDIVEG study randomised 118 overweight participants with high blood lipids or glucose, but who were not on any medication, to either one of two diet patterns — vegetarian or Mediterranean. It was a 3 month intervention with both diet groups having the same but reduced calorie intake. Both diets were effective in reducing body weight, body mass index, and fat mass, with no significant differences between them. There was no significant change between groups in glucose and insulin levels and measures of insulin resistance. However, the vegetarian diet was more effective in reducing low-density lipoprotein cholesterol levels, whereas the Mediterranean diet led to a greater reduction in triglyceride levels. In a very small study comparing the vegan diet to the Mediterranean diet for cardiovascular health in young, healthy volunteers, the Mediterranean diet led to improvements in microvascular function and the vegan diet led to a greater reduction in total cholesterol and weight loss. It is worth noting that the vegan diet in this study was not a low fat intervention with participants getting 35% of calories from fat. To the best of my knowledge, there has not been a head to head comparison of the Mediterranean diet and a low-fat whole food plant-based diet.

PLANT-BASED DIETS WILL BENEFIT PLANETARY HEALTH: Another comprehensive study, this time from New Zealand (NZ), confirming that diets centred around whole plant foods, including vegetables, fruits, legumes, and whole grains are substantially less climate-polluting than animal-based foods, expecially red and processed meats. The study estimated that shifting the population of NZ to a more plant-based diet could result in diet-related emissions savings of 4–42% and would also confer large health gains (1.0–1.5 million quality-adjusted life-years) and health care system cost savings (NZ$14–20 billion) over the lifetime of the current NZ population. The data supporting plant-based diets for planetary health are now overwhelming. The challenge is enacting this change at a population level globally. 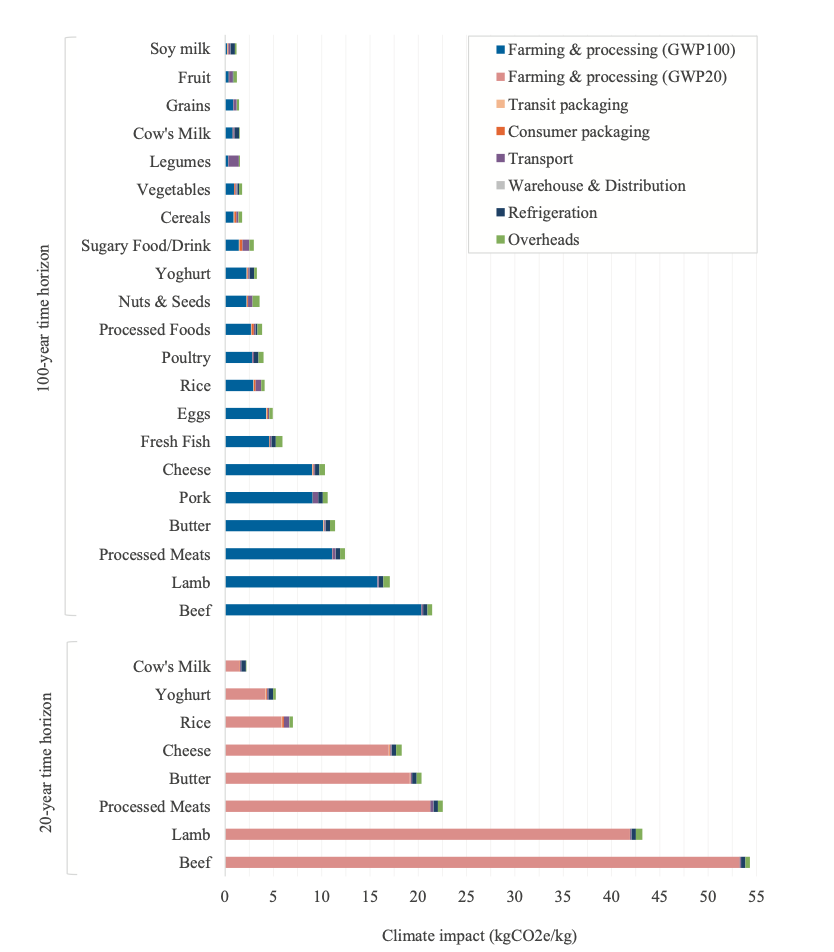 WE ARE FAILING OUR CHILDREN AND JEOPARDISING THEIR FUTURE: This article summarises the finding of the WHO–UNICEF–Lancet Commission on the health and well-being of children globally and the need to place child well-being at the centre of sustainable development goals policies. This is not a good news story. Since the World’s countries agreed on the Sustainable Development Goals (SDGs) in 2015, little progress has been made towards achieving them. So what does this have to do with diet and nutrition? The report criticises the ‘predatory commercial practices’ employed by Industry to market unhealthy products such as junk/processed foods, sugar sweetened beverage, alcohol and tobacco to children, noting that Industry self-regulation does not work. The increased access to junk/processed foods globally has in part led to the number of obese children and adolescents increasing ten times from 11 million in 1975 to 124 million in 2016. The enormous impact of childhood obesity can not be under-estimated and is highlighted in the earlier article on increased risk of cancer in those who are obese in adolescence.

In addition the report highlights the impact of climate change on child health. Despite wealthier countries like the UK performing better in terms of child health and development, these same countries are contributing the most to greenhouse gas emissions. ‘The ecological damage unleashed today endan­gers the future of children’s lives on our planet, their only home’. The UK is ranked among the top 10 countries when it comes to child flourishing, but placed 133rd on “delivering on emissions targets”; it is “currently on track to emit 115% more CO2 than its 2030 emissions target”. As highlighted in the paper from New Zealand, shifting to a healthy plant-based diet is a win win for human and planetary health.

The issues highlighted require high-level Governmental and Institutional support if we are going to reverse current trends. It’s sad to find that often those with the most power are more interested in financial gain as highlighed in this article which suggests that the EU continues to spend millions of Euros per year promoting meat eating. 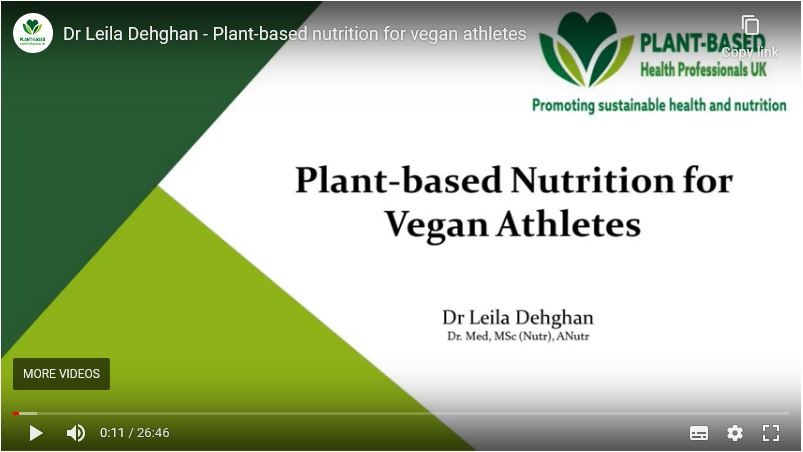 PLANT-BASED DIETS FOR ATHLETES: This is a great talk by team member Dr Leila Deghgan on plant-based diets for athletes, recorded at Plant Powered Expo on Feb 1st at London Olympia. Whilst plant-based diets grow in popularity amongst athletes the low-carb/keto fad still continues. A recent studies warns against a low-carb diet pattern for athletes. A short study in World-class walkers showed that a ketogenic diet impaired markers of bone health. This is worth noting as there is no long lived healthy population that has thrived on eating a low-carb/ketogenic diet.