COCONUT OIL IS NOT HEART HEALTHY: Highly successful Industry marketing has convinced many that coconut oil is a ‘health food’. This well conducted meta-analysis of 16 studies confirms this not to be true. Coconut oil consistently leads to an increase in blood LDL-cholesterol. It is unlikely, given current knowledge, that the corresponding rise in HDL-cholesterol will counteract the adverse effects of the raised LDL. Shockingly, the effects were worse than for palm oil.

Saturated fat consumption consistently raises LDL-cholesterol in a linear fashion. There are not many plant sources of saturated fat but coconut oil is one. Lauric acid comprises about half of the total fatty acids of coconut oil. Although classed as a medium chain fatty acid, it acts more like a long chain fatty acid and does elevate LDL-cholesterol. In addition, 25% of coconut fat consists of the long-chain saturated fatty acids myristic acid and palmitic acid, known to adversely affect cardiovascular health.

If you are going to use oil in cooking then best to stick with oils high in unsaturated fats such as extra virgin olive oil and canola/rapeseed oil. Processed oils are not required in the diet and healthy fats can be obtained from whole plant foods. The worry is that many processed vegan foods now contain quite a bit of coconut oil. These foods should be eaten rarely as a treat as their long term effects on health are unlikely to be favorable. 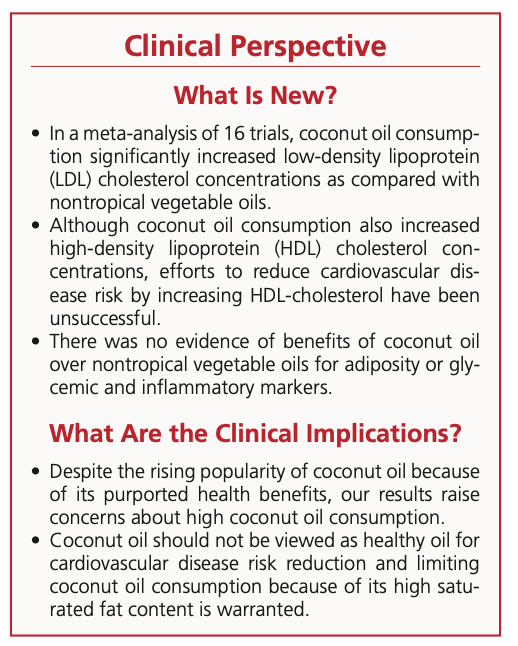 A RIFT IN THE PLANT-BASED NUTRITION COMMUNITY: Continuing with the topic of processed oils, it is very sad that the plant-based nutrition community this week has become divided over the issue. An online discussion on social media seems to have got rather out of hand. This all started with a controversial tweet from US-based Cardiologist, Dr Danielle Belardo stating that extra virgin olive oil (EVOO), nuts and avocado are not the cause of artherosclerosis thus upsetting followers of a no-oil whole food plant-based (WFPB) approach to cardiovascular disease prevention. Some of the controversy stemmed from the unprofessional, sexist and bullying memes and tweets by Jeff Nelson from VegSource who seems to have acted in a very unprofessional manner in the debate. My intention is not to take sides but just to write down some of my interpretation of the scientific data.

There is a big difference between nuts/avocado and EVOO. The addition of nuts and seeds to the diet is fairly uncontroversial with regular consumption beneficial for cardiovascular health, reducing mortality and for cancer prevention. A nice summary of the data is found here. You need to register for free at the journal site to get access. Even Dr Dean Ornish has added a small amount of nuts and seeds to his lifestyle heart programme.

So what about EVOO? I do not intent to enter the debate at this point. I am merely pointing out some useful data on the subject. EVOO is a source of monounsaturated fatty acids and polyunsaturated fatty acids, tocopherols, and polyphenols. We know that replacing saturated fat in the diet with unsaturated sources improves health outcomes and reduces mortality. 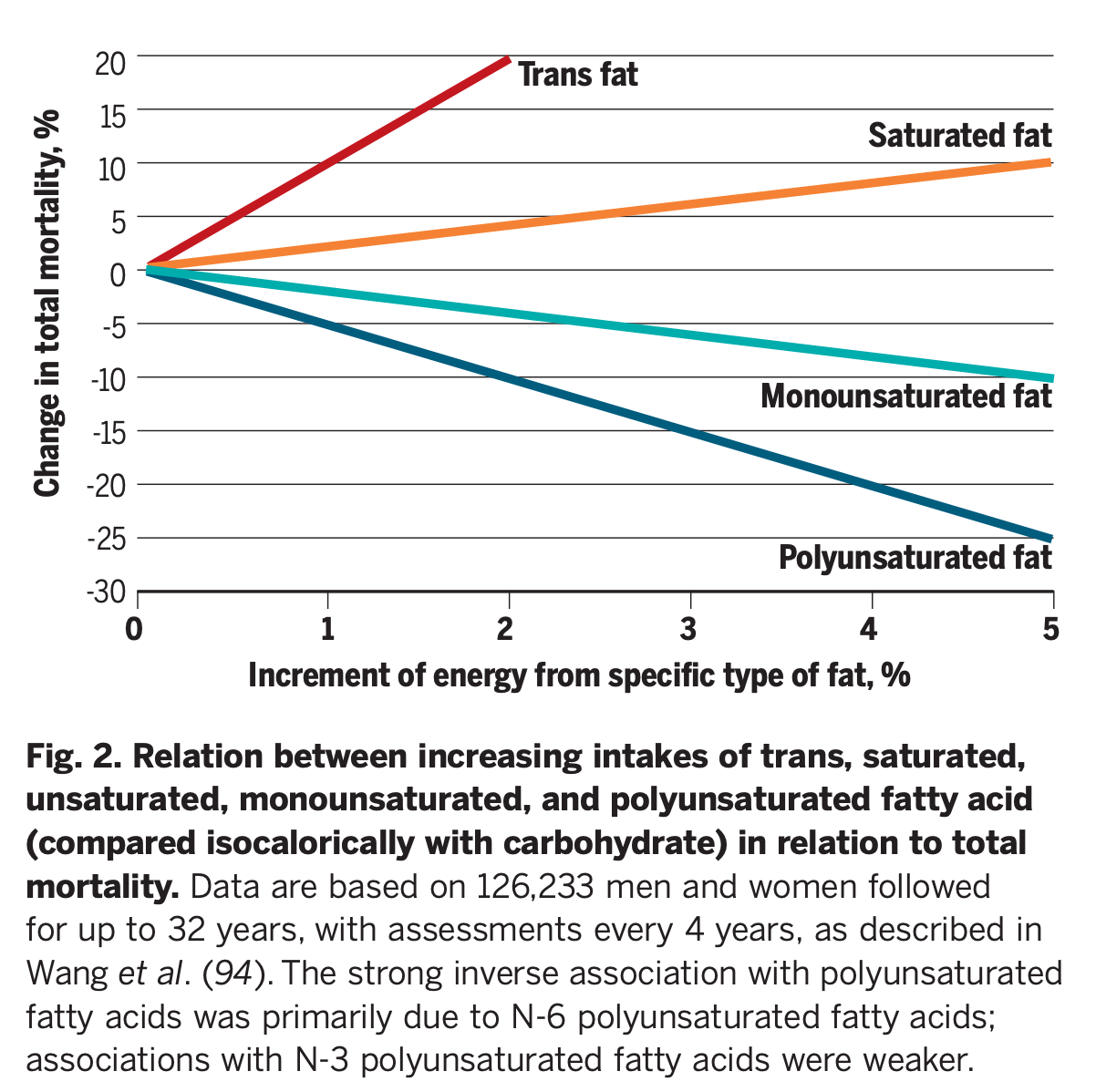 Polyphenols in general are beneficial for health as they are anti-inflammatory and help counter act oxidative stress. The polyphenols in EVOO are thought to be a major reason why its consumption has been shown in some studies to benefit health. One reason cited to avoid EVOO is that in some, but not all studies, EVOO has been shown to impair flow-mediated vasodilatation (FMD), an indicator of endothelial function. Impaired endothelial function is a major driver of atherosclerosis. However, a 2015 meta-analysis suggested that olive oil had a favourable effect on FMD. Nonetheless, a meta-analysis is only as good as the studies included and the comparator data. Another study compared olive oil with walnuts and demonstrated walnut consumption improved FMD in the context of an already high fat meal, whereas olive oil did not. It is not clear to me if this study used EVOO. The study that has not been performed yet is a comparison between a non-oil WFPB diet vs WFBP plus EVOO.

My (and mine only) take home messages: 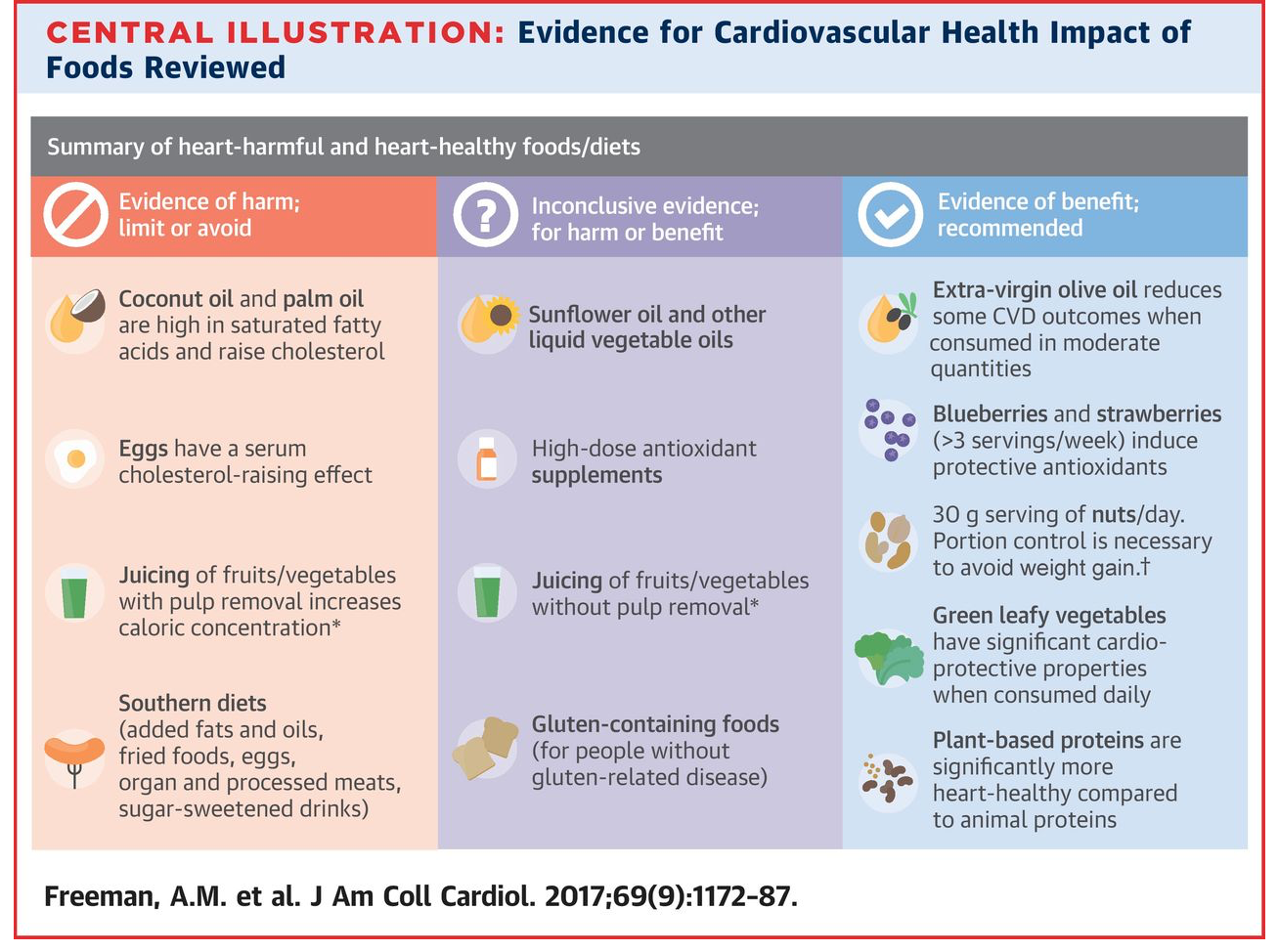 2. EVOO is not an essential component of a healthy WFPB diet as MUFA, PUFA and polyphenols can be obtained from whole plant sources — olives, nuts/seeds and avocado.

3. If you are young, fit, physcially active, an ideal body weight and have are free from health problems then the addition of small amounts of EVOO to the diet is unlikely to result in harm.

4. Given that most of the Western World is suffering from an epidemic of overweight and obesity, added oil, whether EVOO or other, is a very calorie dense addition to the diet and will make weight loss even harder.

5. EVOO is the least processed or refined type of olive oil. However, this is expensive and most people are likely to be consuming more refined sources of olive oil. For some, EVOO is an expense that is not necessary and money is better spent towards buying whole fruits and vegetables.

5. If you have established atherosclerosis then the only diet shown to reverse this is a no oil WFPB diet. In addition, certain inflammatory conditions do seem to be aggravated by the addition of processed oils to the diet such as lupus, arthritis, multiple sclerosis. In these situations I would definitely avoid added oil in the diet.

6. It is best to concentrate on the quality of the whole diet rather than individual components. A diet centred around whole plant foods, whether it contains EVOO or not, is the healthiest choice you can make.

DIET QUALITY MORE IMPORTANT THAN INDIVIDUAL COMPONENTS: We have known this for a while. The overal quality of the diet is much more important that the proportion of various macronutrients. This prospective cohort study used data from the US National Health and Nutrition Examination Survey from 1999 to 2014 from 37 233 adults 20 years or older with 24-hour dietary recall data. The impact of a healthy and unhealthy low-fat or low-carb diet on all-cause mortality was assessed. The results showed that neither diet pattern had an impact on total mortality but those eating the least refined grains and saturated fat and the most plant protein had a lower overall mortality regardless of the relative proportions of macronutrients.

However, it is worth noting that neither diet could classified as truly low-fat or low-carb. Low-fat in the plant-based nutrition world equals 10–15% of calories from fat. In this study the fat consumption ranged from 26.7–36.4% of total energy intake. Low-carb diets are generally defined as <40% of calories from carbs. In this study, carbohydrate consumption was 46–58% of total calorie intake. So the main take home message is what we have known for decades. A diet pattern that emphasises unrefined carbohydrate, unsaturated fats and plant protein can reduce mortality. Authors conclusion: ‘The food sources of high-quality carbohydrates, plant protein, and unsaturated fat include whole grains, nonstarchy vegetables, whole fruits, and nuts. These foods and their bioactive components (such as fiber, vitamins and minerals, and phytochemicals), rather than the macronutrients, may be involved in the associations… with mortality’. In other words, as long as you eat mostly whole plant foods, the proportion of macronutrients do not matter. 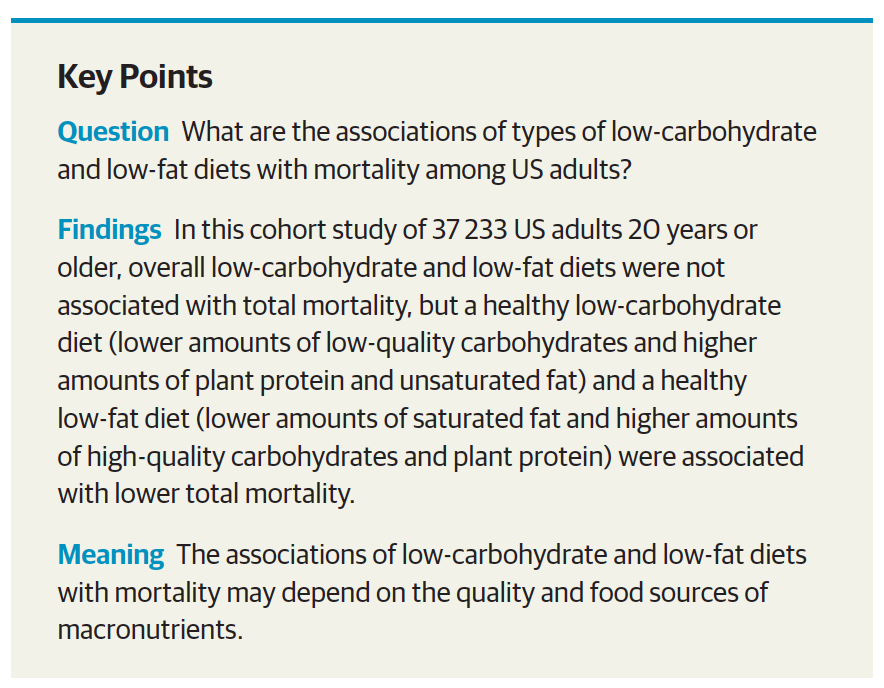 IMPACT ON DIET CHOICE ON INFECTIOUS DISEASES: This week continues to highlight the risk of all aspects of animal agriculture to human health. We often forget the number of human infectious diseases that are actually zoonoses — an infection that has jumped from animals to humans and then can be transmitted between humans. The latest coronavirus is such an example. Although the original source is thought to be bats and snakes, the spread to other animals and then to humans seems to have occurred due to the live animal trade in Chinese markets. This article in JAMA summarised our current knowledge on this new virus.

So many infectious diseases in humans are transmitted from animals used for food and farming. For examples In 2018, EU Member States reported 5,146 foodborne outbreaks affecting 48,365 people. A third of these infections were were caused by Salmonella, mainly from the consumption of eggs. Hepatitis E infection in the UK is transmitted mainly from the consumption of infected pigs. The infection is normally self limiting but can be life-treatening in those with a comprominsed immune system. Other serious outbreaks in recent years have included Swine flu, Avian flu and even CJD. Contamination from animal agriculture also results in infections such as E coli being spread through the consumption of plant foods.

It is not just the spread of infections from animals to humans that is a cause for concern. Animal agriculture is a major contributor to antibiotic resistance. We have entered a post-antibiotic era when it is not uncommon, certainly in the hospital I work in, to come across infections for which there are no effective antibiotics. Currently, at least 700,000 people die globally each year due to drug-resistant diseases. This figure it predicted to be as high as 10 million by 2050 if current trends continue. Most of the antibiotics sold around the world are actually used in animal agriculture and many of the resistant bacteria orginate from antibitic use in aniamls. Without directly addressing this issue we are unlikely to reverse current mortality trends.

RED MEAT, POULTY AND FISH CONSUMPTION AND RISK OF DIABETES: A large new study from China with 0.5 million participants and nearly 15000 case of diabetes reported an increased risk of type 2 diabetes with higher intakes of red meat and fish, but not with poultry. Risk increased 19% for every 50g/d of red meat and 12% for every 50g/d of fish. For red meat there was a dose-response relationship with 8%, 9% and 19% increases in risk with an intake of 1–3, 4–6 and 7 times/week respectively compared to <1 time/week, suggesting even modest intakes may increase risk. Adjustment for BMI attenuated the associations by 40–50% suggesting obesity may contribute to part of this increase in risk, but the high haem iron content of red meat may also contribute. The findings are consistent with previous studies on red meat intake and diabetes risk, including a meta-analysis from 2009.

The increased risk of type 2 diabetes with fish consumption may surprise some people, given that most international dietary guidelines recommend the consumption of fish at least twice per week. However, most studies have not shown a benefit for fish consumption on the risk of diabetes, including a meta-analysis from the 2012. In fact, in the Adventist Health Study-2, those that ate fish had a higher rate of diabetes than both vegetarians and vegans. Nonetheless, the data are not consistent. One reason why fish consumption could increase the risk of type 2 diabetes is through exposure to environmental contaminants, which has been shown in a study from Canada. 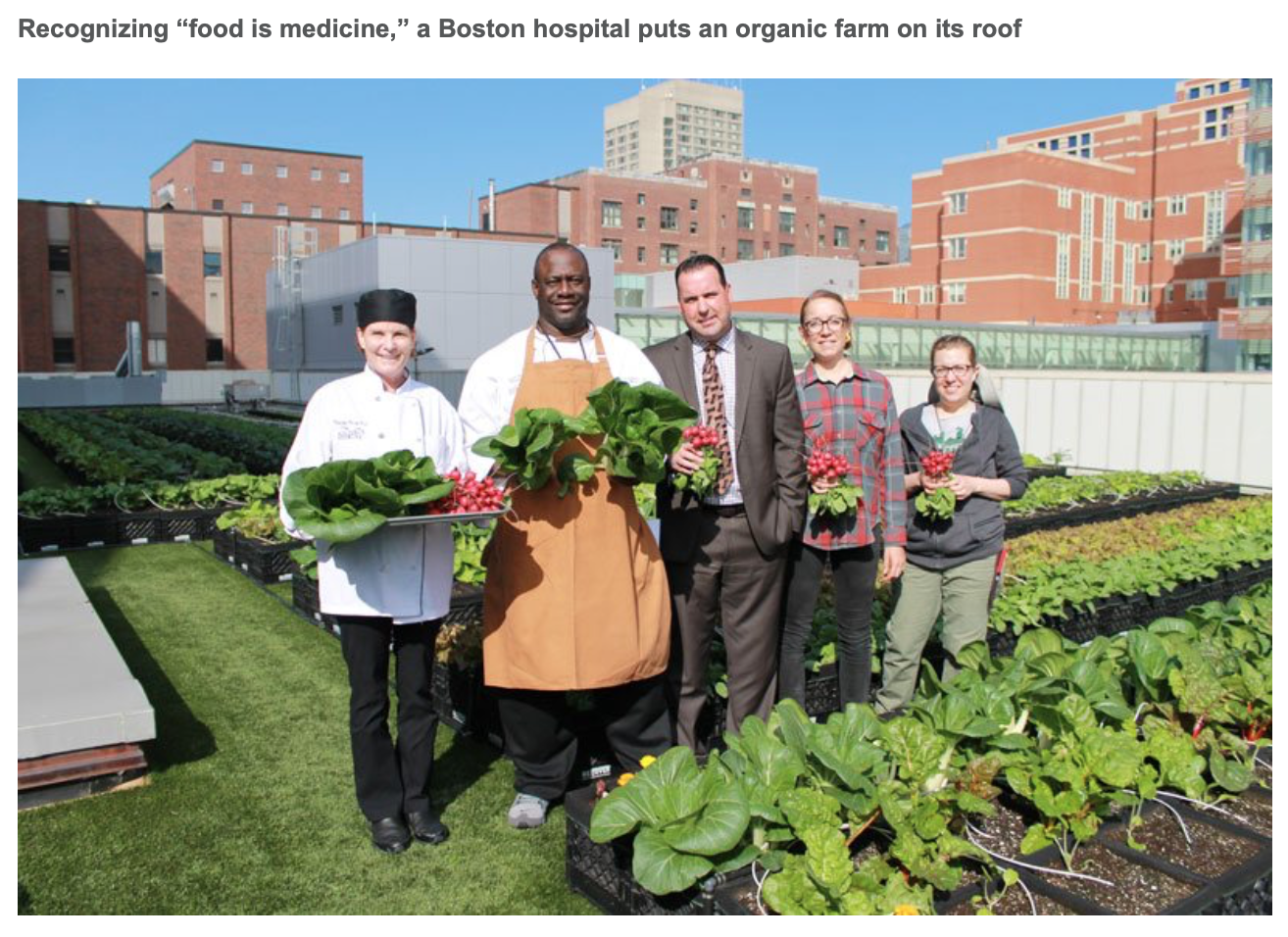 SOME GOOD NEWS: More and more public institutions are recognising the importance of choosing plant-based meals for both human and planetary health. The picture above shows Boston Medical Centre that has a roof top garden for growing vegetables for use in meals for patients, staff and the poor. Here in the UK, primary schools in Leeds are going to start offering more plant-based meals in primary schools as part of an initiative by Leeds City Council, to halve the city’s carbon footprint by 2025. Lets hope that these good practices continue to spread to all public sector institutions.