This week I cover some controversial topics, including potential benefits of nut and olive oil consumption, diet and bone health, vegan diets and renal stones, and point you to resources covering some inconvenient truths about COVID-19.

NUTS AND CARDIOVASCULAR DISEASE (CVD): This study adds to prior evidence supporting the regular consumption of tree and peanuts nuts for prevention of CVD. We have known for a while that eating nuts has a number of health benefits. Nuts are high in fibre, protein, unsaturated fats, plant sterols, vitamins and minerals. There has always been a concern about the high calorie density of nuts, but despite this health benefits persist. In fact, most studies suggest that regular nut consumption helps maintain a healthy weight, in part due to the fibre content that delays gastric emptying, increases satiety and reduces hunger. In addition, at least 20% of the fat content is excreted in the faeces rather than being absorbed.

This study includes almost 200,000 male and female participants from the Nurses’ Health Study and the Health Professionals Follow-up study, followed for over 30 years. Consumption of nuts was documented every 4 years. The results confirm that regular consumption of nuts, any type of nuts, can significantly reduce the risk of heart disease and stroke and the chances of dying from these conditions. The risk reduction was in the order of 10–30%. The new finding from this study is that even if you have not been eating nuts regularly, if you start to do so, you can significantly reduce your risk of future CVD. So it really is never too late to change habits. In addition, substituting nuts for red and processed meat, refined grains, desserts and French fries also significantly reduces subsequent CVD risk. The serving size examined was small; 0.5 serving per day, which is 14g or half a handful.

Within the plant-based community there remains some disagreement about the benefits of nuts consumption within a whole food plant-based diet. Partly because the diet shown to reverse heart disease is a very low fat diet that excludes nuts. In addition, many of the studies are either funded by the nut industry or the authors receive research funding from these companies (including two of the authors from the study highlighted). However, for me the weight of evidence supports regular, albeit small portion, nut consumption. Dr Dean Ornish, the father of lifestyle medicine and plant-based nutrition, now allows a very small portion of nuts in his lifestyle medicine programme. His website provides a very nice summary of the data supporting his change in practice, which you can read here. 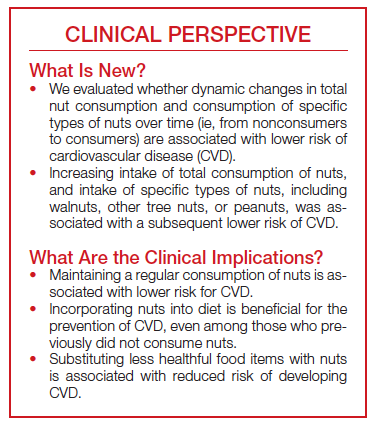 BONE HEALTH ON A PLANT-BASED DIET: This is an area in which we probably need more data and is an important consideration for those on a 100% plant-based diet. A healthy diet and lifestyle are fundamental to maintaining bone health and preventing osteoporosis later in life. Important nutrients include calcium, potassium, magnesium, folate, vitamin K and vitamin D (from sunlight), which can all be obtained from a healthy plant-based diet. Nonetheless, some studies have suggested that a vegan diet may negatively impact bone health. The EPIC-Oxford study showed no differences in the self-reported incidence of fractures between meat eaters, fish eaters and lacto-ovo-vegetarians, but vegans had a 30% higher risk of fracture compared with meat eaters. However, when the results were adjusted for calcium intake, those consuming at least 525 mg of calcium per day, regardless of diet pattern, showed no increase in risk of fracture. So if the diet contains an adequate amount of calcium there should be no disadvantage for bone health with a vegan diet.

In the Adventist Health studies, vegetarians were not at higher risk of fractures per se, but the studies report a protective effect of protein consumption, whether from plant or animal sources, for prevention of wrist fractures in older women. Consumption of legumes and meat analogues (derived from soya, wheat, gluten, eggs and milk) were also found to be protective against hip fractures in men and women. Interestingly, in a cross-sectional study of 105 Mahayana Buddhist vegan nuns and 105 omnivorous women (average age 62 year; range 50–85 years) randomly sampled from monasteries in Ho Chi Minh City, no difference in bone mineral density or rates of osteoporosis were found between the two groups. The vegans in this study had a median daily calcium intake of 330mg/day. Nonetheless, a systematic review and meta-analysis of 20 studies, including 37, 134 participants, examining bone mineral density and fracture risk, found that vegetarians and vegans had lower bone mineral density and vegans an increased risk of fracture compared to omnivores. The main limitation of the study and hence applicability of the findings is that in only one of the 20 studies was diet quality taken into consideration. In that one study there was no adverse effect of a vegetarian or vegan diet on bone mineral density. What seems to be more certain is that reducing animal-derived protein consumption and increasing fruits and vegetables and plant sources of protein can promote better bone health, in part due to a more favourable acid-base balance. In addition, dairy consumption is not required to maintain adequate bone health.

The study highlighted is small with only 73 participants and an average age of 56 years. It found that an increase in consumption of plant foods with or without meat was associated with a higher bone mineral density. This supports findings of larger, more robust studies. For example, a systematic review and meta-analysis of 13 studies showed that fruit and vegetables consumption was associated with better bone health and increasing intake by just one portion a day could reduce the risk of bone fracture.

Take home messages for bone health; Make sure you are consuming at least 525mg per day of calcium (the UK recommended daily intake for adults is 700mg); Eat plenty of fruits and vegetables; Reduce animal sources of protein; Dairy consumption is not necessary for bone health. 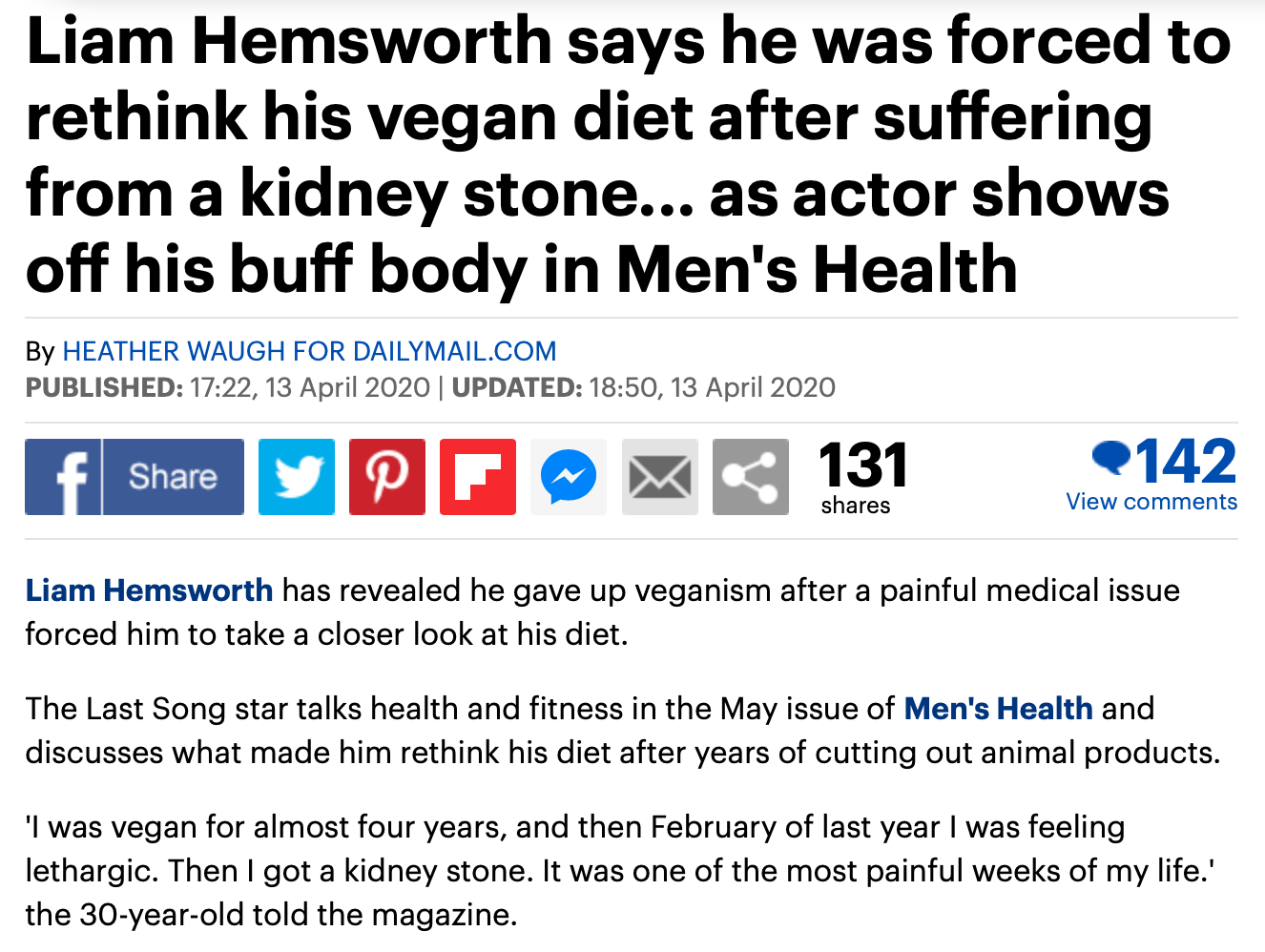 What about vegan diets? Its worth remembering that around 10% of people develop kidney stones in the their lifetime, most of whom are consuming an omnivorous diet. The most common composition of renal stones is calcium oxalate. In the EPIC-Oxford study, vegetarians and vegans (analysed together) had a significantly reduced risk of developing kidney stones. Other plant-predominate diet patterns such as the DASH diet are also associated with a reduced risk of developing kidney stones. The concern about vegan diets is the potentially high intake of oxalates from plant foods such as spinach, Swiss chard, nuts, beets etc., but the relationship between intake and risk of stones is not straight forward. Other factors can increase the risk too such as too much protein, not enough calcium, vitamin C supplements, too much salt and sugar and dehydration. Some underlying medical conditions can also mean you absorb too much oxalate from the gut. You can of course optimize your vegan diet to have a lower oxalate content by limiting some of the high oxalate foods and making sure other aspects of the diet are optimised, including sufficient calcium, not too much salt and sugar and plenty of water for hydration. This is an excellent review on the topic with tables below taken from the paper. 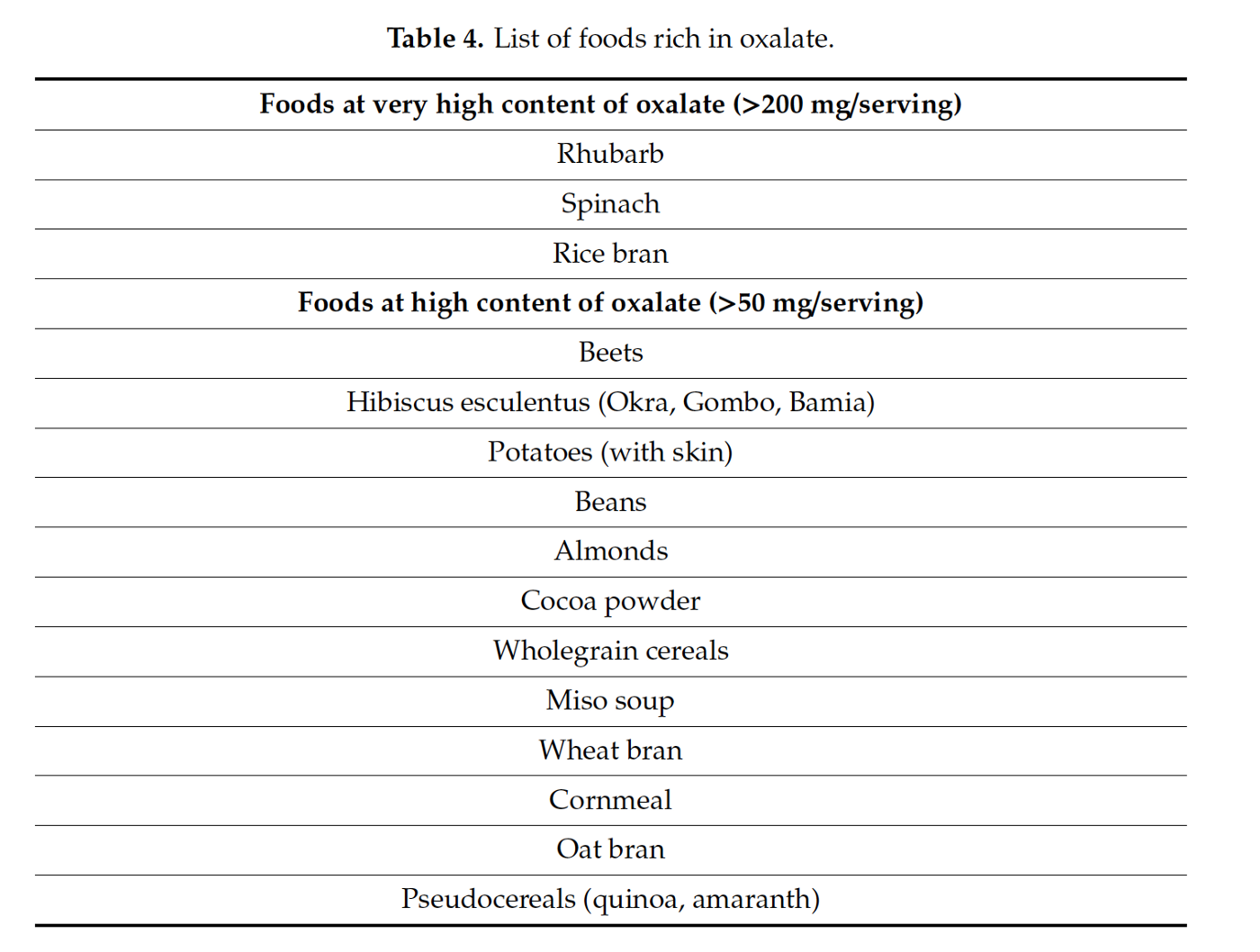 OLIVE OIL AND CARDIOVASCULAR DISEASE (CVD): This remains a controversial topic in the plant-based community. I have written more extensively about this topic in a recent weekly review, so won’t repeat the debate. It is worth discussing this current study as it adds some additional information to the topic. It reports finding from the Nurses’ Health Study and the Health Professionals Follow-up study and includes >100, 000 participants followed for 24 years. During the study period there were 9,797 cases of CVD, including 6,034 coronary heart disease (CHD) cases and 3,802 stroke cases. Higher olive oil intake (>0.5 tablespoon/day or >7 g/day) was associated with a 14% lower risk of CVD and 18% lower risk of CHD (pooled HR: 0.82; 95% CI: 0.73 to 0.91). No significant associations were observed for total or ischemic stroke. Replacing 5 g/day of margarine, butter, mayonnaise, or dairy fat with the equivalent amount of olive oil was associated with 5% to 7% lower risk of total CVD and CHD. No significant associations were observed when olive oil was compared with other vegetable oils.. In a subset of participants, higher olive oil intake was associated with lower levels of circulating inflammatory biomarkers and a better lipid profile. These results are in keeping with a meta-analysis from 2014, which in contrast also showed a benefit of olive oil consumption for stroke prevention.

The points worth mentioning from this study include the fact that total olive conusmption that was studied rather than Extra Virgin Olive Oil (EVOO) consumption. Most studies point to benefits of EVOO, the highest quality olive oil, due to higher quantities of polyphenols, including those that are unique to EVOO (oleacein and oleocanthal) and also higher quantities of tocopherols, phytosterols, carotenoids, luteolin, and triterpenic acids. The mean consumption of olive oil in this study was fairly low with only 12 g/day in the highest category (5% of the overall cohort), and only around 10% of participants consumed >1 teaspoon (4.5 g) daily. This is much lower than the usual quantities consumed in Mediterranean countries and also much lower than the quantities used in interventional studies. For example, in the PREDIMED study, the mean olive oil consumption was 38g/d and the intervention arm received 1 litre of EVOO a week. What is not clear is whether olive oil consumption in non-Mediterraena countries is just a marker of a more healthy diet. However, this study does confirm that swapping animal-derived fat, such as butter, margarine, mayonnaise and dairy with olive oil is likely to improve cardiovascular health.

UNCOMFORTABLE TRUTHS SURROUNDING THE CORONAVIRUS PANDEMIC: There are two aspects of the current pandemic that I think do not receive enough airtime. They are covered in the two videos highlighted below, which provide excellent summaries. Firstly, the issue of how this pandemic arose and its root cause, which is embedded in our use of animals as food. This video from Klaus Mitchel from Plant Based News is excellent. 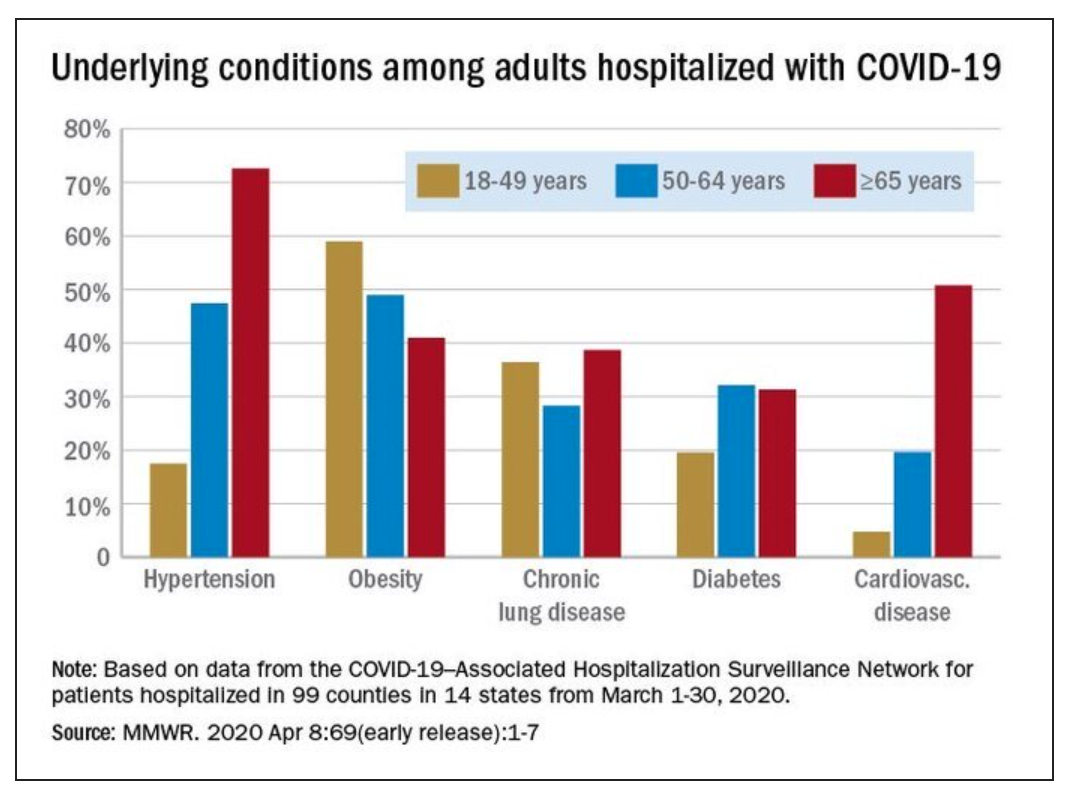 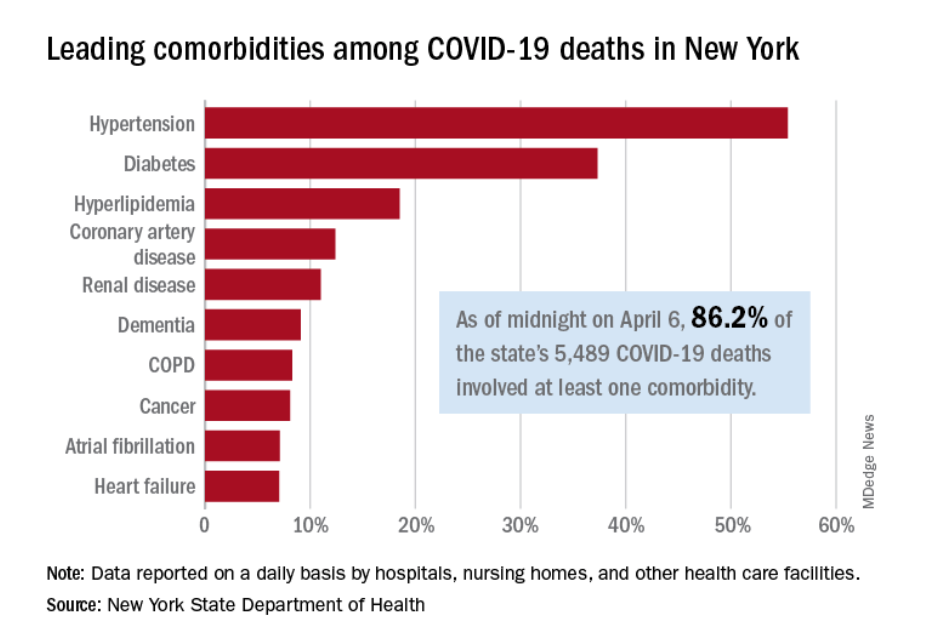 The sad fact is that 80% of these underlying conditions could have been prevented through a health diet and lifestyle. This is discussed in the video interview with Dr David Katz, a leading authority on preventative medicine.