The themes of this weeks are the impact of diet on cancer and brain function. We also mark the 50th anniversary of Earth day, whose mission is build the world’s largest environmental movement to drive transformative change for people and planet. For the survival of our planet we much transition to a plant-based food system. The current pandemic has further highlighted how urgent this is.

DIET MATTERS DURING CANCER TREATMENT: This is a really exciting study. We already know that a healthy diet can help reduce the risk of developing cancer. However, less is known about the role of diet DURING cancer treatment. Previous studies have already suggested that the health of the gut microbiome is important in determining response to certain anti-cancer therapies, especially those that rely on the functioning of our own immune system.

This study from Japan included 52 patients with cancer receiving a type of immunotherapy that activates the patients own immune system (programmed death death-1 inhibitors). Diet information was collected and stool samples were analysed before the start of treatment for levels of short chain fatty acids (SCFA, including acetate, butyrate and proportionate). Higher concentrations in the stool generally reflect a healthier gut microbiome.

The results showed that those patients with higher concentrations of SCFAs in the stool had a significantly better response to treatment with a longer period of remission. Higher SCFA levels were associated with consumption of fibre, including green vegetables, cabbage and mushrooms. Mushroom consumption in itself was also associated with a significantly longer remission.

Clearly larger studies are required and we need to better understand the mechanisms responsible for the observed association. In the meantime, if you have a diagnosis of cancer there is no downside to making your gut bacteria as healthy as possible and centering your diet around whole plant foods. 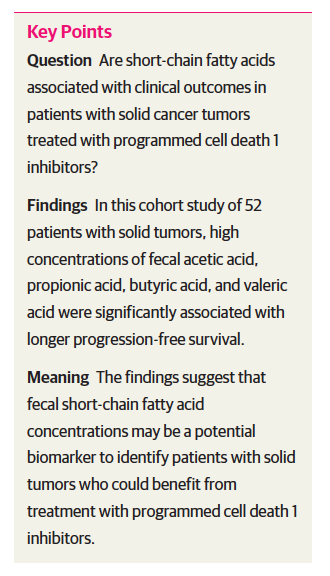 OVERWEIGHT AND OBESITY IN CHILDHOOD AND RISK OF HAEMATOLOGICAL CANCERS: Obesity is a known risk factor for a number of common cancers. However, there are limited data of the role of weight and other modifiable factors on the risk of haematological cancers. This study from Sweden is the first study to evaluate the contribution of body mass index (BMI) and height in childhood and puberty to the subsequent risk of haematological cancers. 37,669 men born in 1946–1961 from the BMI Epidemiology Study who had weight and height measured at 8 (childhood) and 20 (young adult age) years of age were included. The results suggest that higher childhood (but not puberty) BMI increases the risk of haematological cancer by 11%. The risk of lymphomas was particularly increased by 14–31%, with the greatest association with the commonest lymphoma subtype — diffuse large B-cell lymphoma. Interestingly, greater childhood height but not weight was significantly associated with the risk of multiple myeloma. Although we do know that higher adult body weight is associated with the risk of developing myeloma.

Potential mechanims by which body weight may increase the risk of haematological cancer but require further investigation include the link between obesity and inflammation and higher levels of cytokines, growth hormones and insulin. Although this study only includes men, data from the Million women study in the UK suggest a similar association between body weight and risk of lymphomas.

This study provides yet another reason why maintaining a healthy weight in childhood is so important for prevent of chronic disease in adulthood.

We have recently summarised the evidence for diet and risk of non-Hodgkin lymphoma in the paper below.

TOMATO CONSUMPTION AND THE RISK OF LIVER CANCER: The incidence of liver cancer has risen over recent decades with causes including, viral hepatitis infections, alcohol excess and non-alcoholic fatty liver disease (NAFLD). With the increasing rates of NAFLD linked to obesity, insulin resistance and type 2 diabetes, the incidence of liver cancer is predicted to rise dramatically over coming years. Tomato consumption has been associated with a reduced risk of a number of cancers, although the data are not always consistent. The strongest association is with prostate cancer prevention.

This paper examined the association between tomato and lycopene intake and the risk of liver cancer in the Singapore Chinese Health Study, a prospective study of more than 60,000 middle-aged or older Chinese men and women in Singapore. During the 25 years of follow-up, there were 561 cases of liver cancer. Those with the highest consumption (>8.83g per day) of tomatoes had a 37% reduced risk of developing liver cancer compared to those consuming the least (<1.95g per day). However, there was no association found between the consumption of lycopene and liver cancer suggesting that it may be compounds other than lycopene that are responsible for the protective effects of tomato consumption. Potential mechanisms hypothesised by the authors include the anti-inflammatory properties of tomatoes and the benefits to gut health. More studies are required to confirm these results, but in the mean time increasing tomato and other vegetable consumption in those at high risk of liver cancer is without harm. Here is some more information about the nutrients in tomatoes.

PLANT-BASED DIETS IMPROVE COGNITIVE FUNCTION: Dementia presents a rising global burden. Healthy diet and lifestyle behaviours could prevent more than a third of cases according to the Lancet Commission on Dementia. The WHO has published guidelines for the prevention of dementia in 2019, which emphasise the benefits of a Mediterranean-style diet pattern high in whole plant foods, low in red/processed meat and processed foods in general and emphasising plant sources of fat. The MIND diet is a hybrid of the DASH and Mediterranean diet and is associated with a lower risk of developing dementia. Data are emerging to support the role of more plant-based diets in general for the prevention of cognitive decline with age.

This cross-sectional study used data from the 2011–2014 National Health and Nutrition Examination Survey (NHANES) in the US and included 3,039 participants with a median age of 70 years who had completed both dietary and cognitive assessments (2,655 with complete data sets). The racial mix included 47.6% non-Hispanic White, 24.2% non-Hispanic Black, 8.9% Mexican American, 9.8% Other Hispanic, 8.0% non-Hispanic Asian, and 1.6% Other (including multi-racial). The study examined the impact of a plant-based dietary pattern as assessed by macronutrient intake (high in fibre and polyunsaturated fats and low in saturated fat and protein) on various aspects of cognitive functioning. The results showed that adherence to a plant-based dietary pattern was significantly associated with better performance in executive function tasks and a long-term memory task. The strength of association was less after adjusting for BMI, suggesting that the known beneficial impact of a plant-based diet on BMI may play a role in improved cognitive function. The study also showed that those eating a more plant-based diet had lower levels of CRP, a marker of inflammation. Chronic inflammation plays a key role in the development of a number of diseases and implicated in dementia risk. The study also examined the impact of monounsaturated fats (MUFA) on cognitive fucntion and did not find a positive association. The authors suggest that desipte the high consumption of MUFA in the Mediterranean diet in the form of olive oil, the results suggest that it is the whole plant foods that are more likely to be contributing to the benefits of this diet pattern for cognitive health.

The limitations of this study include the fact that the dietary data were macronutrient reports rather than actual plant and non-plant food consumption and the cross-sectional design, which lends itself to being confounded by reverse causation. Nonetheless, this adds to the growing body of evidence supporting the role of healthy plant-based diets for maintaining optimal cognitive health with aging.

DIETARY FLAVONOID INTAKE AND RISK OF DEMENTIA: A number of studies have examined the micronutrients in plant foods that may be beneficial for brain health, but data have not always been consistent. However, higher consumption of flavonoids seem to be beneficial. Flavonoids are a class of polyphenol representing more than 5,000 bioactive compounds that are found in a variety of fruits and vegetables.

This paper examines data from the Framingham Offspring study and included 2801 participants with 193 cases of dementia. The median baseline age was 59 years and participants followed for almost 20 years. The results suggest that higher intakes flavonoids are associated with a 50–80% reduction in risk of dementia, including Alzheimer disease. Potential mechanisms for this protective effect include the antioxidant potential of flavonoids and hence the scavenging of reactive oxygen species. More recently it has been shown that flavonoids may act to protect neurons from neurotoxins and combat neuroinflammation. This is the second study I have written about this year to report a beneficial association. The image below shows the food sources of the 6 main groups of flavonoids. 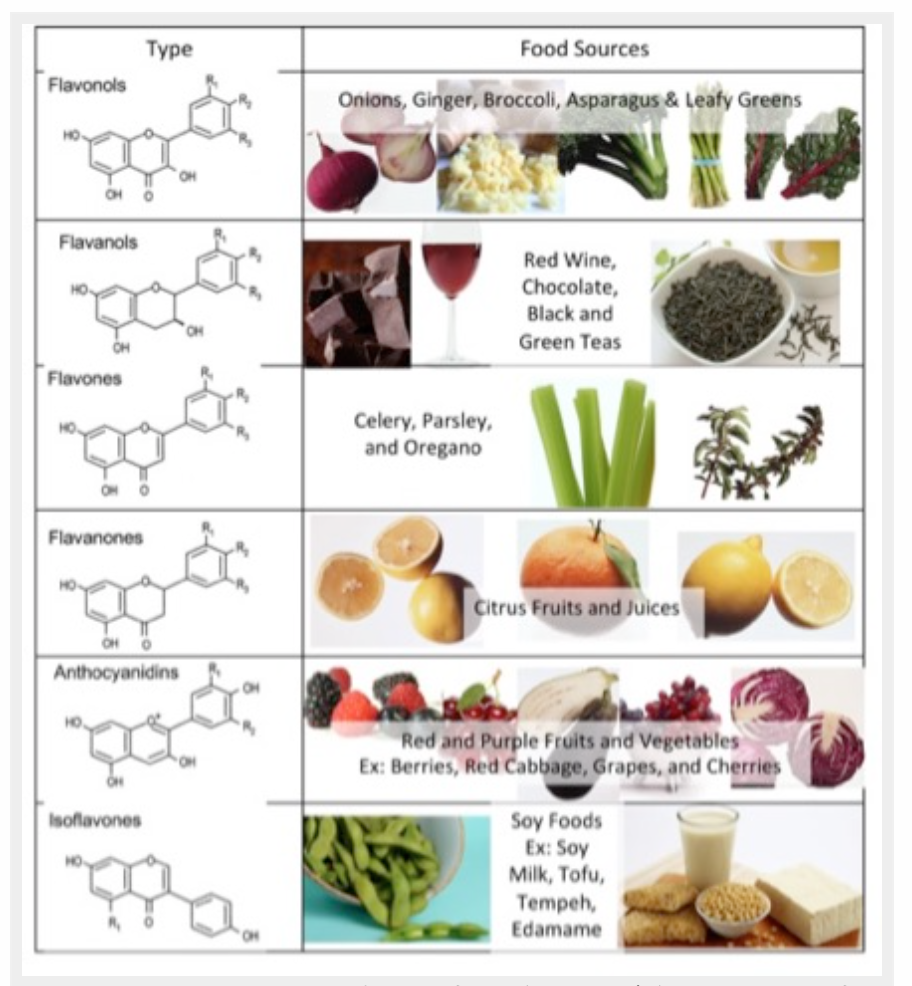