More media misinformation this week, may be to counter the No Meat May campaign or just to sell newspapers. Also, a huge development in our understanding of a plant-based diet so read on…

MORE MEDIA MISINFORMATION: A recent systematic review concluded that people who avoid eating meat have higher rates of depression, anxiety and/or self harm behaviours. This sounds rather alarming! But what should you know about the study before drawing a conclusion? Here are my headlines.

3. 11 of the 18 studies included showed a negative impact of meat abstinence on pscyhological well-being, 4 studies showed no impact and 3 showed a favourable impact. So by no means did all studies included reach the same conclusion as the review article. The one randomised controlled trial of diet and mental health included (a more rigorous study design) actually showed benefit for a vegetarian diet pattern.

4. The quality of the diet in those who avoided meat consumption is not included. Vegetarians and vegans can live off ultra-processed foods, which we know can adversely affect mental health. This can not be extrapolated to conclude that a HEALTHY vegetarian or vegan diet causes mental health disorders.

5. We have plenty of more robust data from prospective cohort studies demonstrating that diet patterns that increase the consumption of whole plant foods, especially foods and vegetables, whilst minimizing animal-derived foods, are associated with better mental health and well-being.

We have data from 2 randomised studies, the SMILES and the HELFIMED trials, that demonstrate the benefits of a Mediterranean diet pattern which emphasizes whole plant foods whilst minimizing red and processed meat, for those with an established diagnosis of depression. We even have a randomised study examining the impact of a low-fat vegan diet in a multi-centre work place intervention conducted by the Physicians Committee for Responsible Medicine for the company GIECO in the United States. It is not clear why this study was not included in the systematic review! 292 participants across 10 corporate sites, who were overweight and/or had a history of type 2 diabetes, were randomised to a low fat vegan diet composed of fruits, vegetables, whole grains and legumes or to continue their usual diet for 18 weeks. The intervention group also had weekly support meetings. The results showed a significant improvement in mental health well-being, work productivity and reductions in depression and anxiety scores in those on the vegan diet.

6. I accept that the role of fish in the diet for its impact on mental health remains a matter for debate. For me, the level of heavy metal, plastic and toxin contamination of fish is reason enough to avoid and obtain long chain omega-3 fats direct from marine algae.

In conclusion, these misleading headlines are generated from a poorly conducted review, funded by the Beef Industry with an over-interpretation of the results in favour of the sponsors.

PLANT-BASED DIET VS ANIMAL-BASED KETO: The diet wars continue amongst proponents of a plant-based diet and a low-carb, animal-based diet. The ketogenic diet is an extreme version of a low-carb diet, in which the body uses ketones rather than glucose for energy given that carbohydrate intake is severely restricted. Some of the seminal studies on the metabolic effects of different macronutrient combinations has been conducted by Dr Kevin Hall, from the National Institute of Health (NIH). Interestingly, Dr Kevin Hall previously headed up the Nutrition Science Initiative (NSI), founded by the low-carb proponent Dr Gary Taubes. However, when Dr Hall’s research showed the complete opposite of the low-carber’s theory on the causes of obesity, he fell out with the NSI and left and the NSI has since all but collapsed.

Dr Hall conducts very rigorous studies known as metabolic ward studies in which participants are admitted to a hospital ward and live there for a set number of days, with all the food provided and undergo an array of blood and metabolic tests. His previous study showed that a ketogenic diet was associated with an increase in markers of inflammation and in LDL-cholesterol and did not improve insulin sensitivity or glucose regulation.

The current study, funded by the NIH, examined a plant-based diet vs an animal-based ketogenic diet and investigated whether ketosis (the generation of ketone bodies) increased fat loss and suppressed appetite. 20 participants, with a median age of 30 years and a median BMI of 28 were admitted to the hospital for 28 days and followed a healthy low fat plant-based diet (75.2% carbohydrate, 10.3% fat) or a low-carb diet (75.8% fat,10.0% carbohydrate) for 2 weeks and then crossed over for 2 weeks on the opposite diet. The participants were offered twice the amount of food they needed on a daily basis and were asked to eat as much as they wanted (ad libitum). The macronutrinent intakes were kept stable in each group with both groups consuming 15% of energy from protein.

DIETARY FIBRE IS ESSENTIAL FOR PREVENTNG CHRONIC DISEASE: A recent prospective cohort study from France, called the NutriNet-Sante study, is investigating the relationship between diet, nutrition and health and has generated some very interesting results to date. This includes the reduced risk of cancer with a greater consumption of whole plant foods and organic foods. The study has reported that adherence to a sustainable diet pattern emphasising whole plant foods and minimising animal-derived foods reduces the risk of cancer and cardiovascular disease. Also that fibre consumption in people with asthma has been associated with fewer symptoms and greater control. 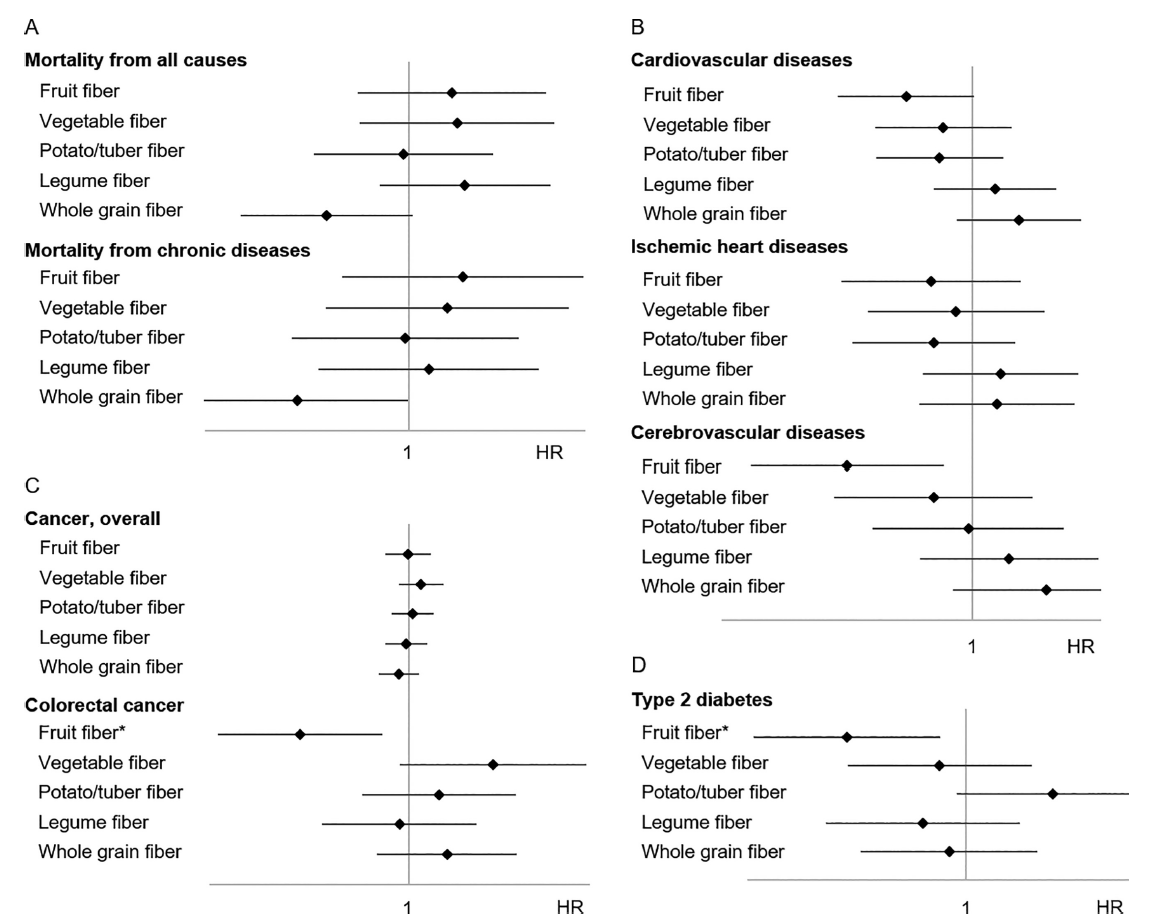 Fibre is only found in whole plant foods and most people following a Western diet pattern are severely deficient in this essential nutrient. See the factsheet below for ways of increasing fibre in the diet, applicable for all diet types. 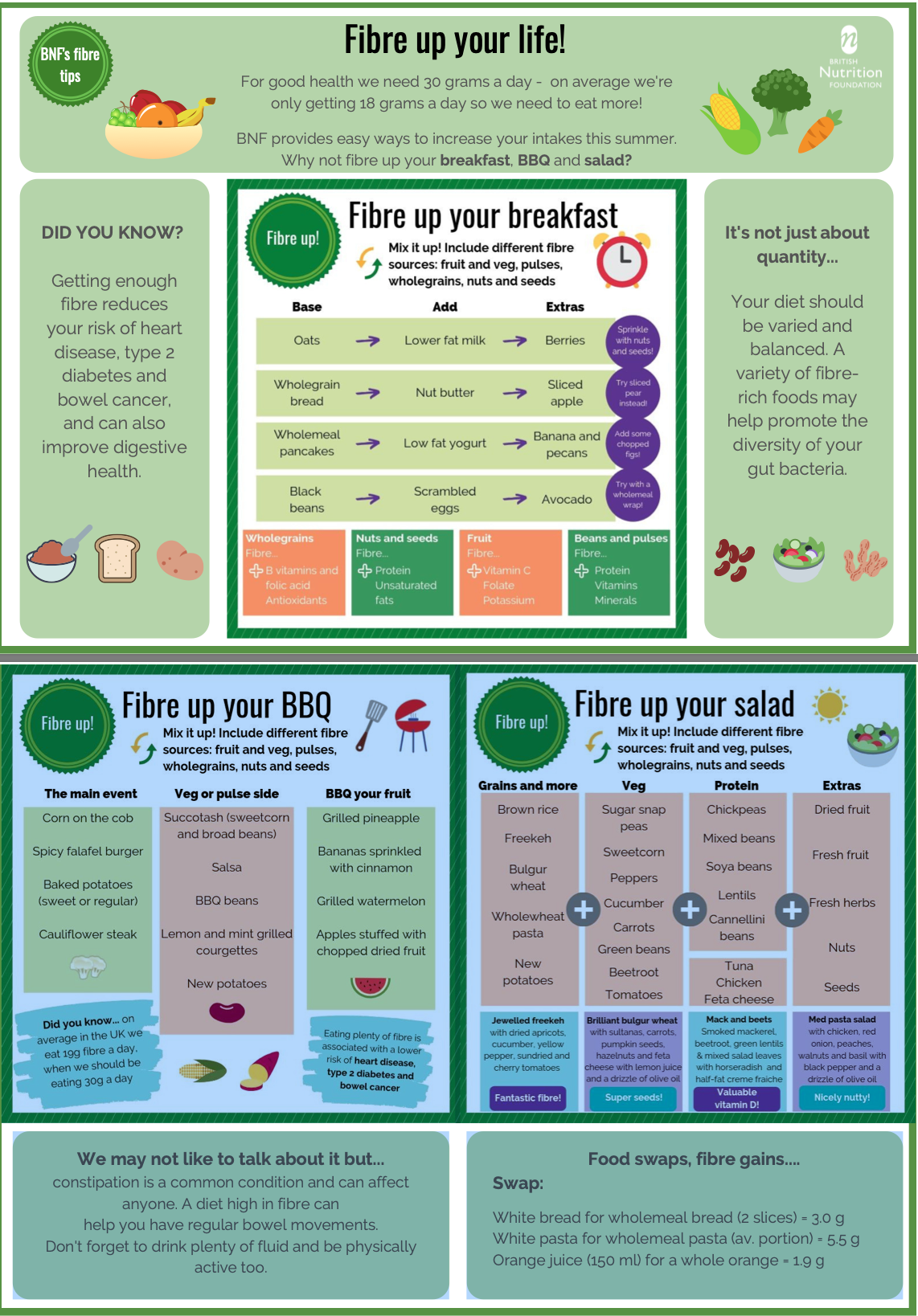 ADVERSE EFFECTS OF ULTRA-PROCESSED FOODS: We could not let the delivery of Krispy Kreme donuts to NHS hospitals go unnoticed without highlighting the complete contradiction of ‘junk food’ being encouraged in hospitals. Read our article in Plant Based News for the full story. Sadly the BMJ did not accept our article, publishing their own rather tongue and cheek version.

The Nutrinet Sante Cohort mentioned above has produced a number of papers highlighting the detrimental effects of the consumption of ultra-processed foods on health, including an increased risk of cancer, cardiovascular disease and type 2 diabetes. In addition, Dr Kevin Hall’s team conducted a study in 20 in-patient adults who were exposed to ultra-processed versus an unprocessed diets for 14 days each, in random order. The ultra-processed diet caused increased ad libitum energy intake and weight gain despite being matched to the unprocessed diet for presented calories, sugar, fat, sodium, fibre, and macronutrients. See the graphic below from the study. 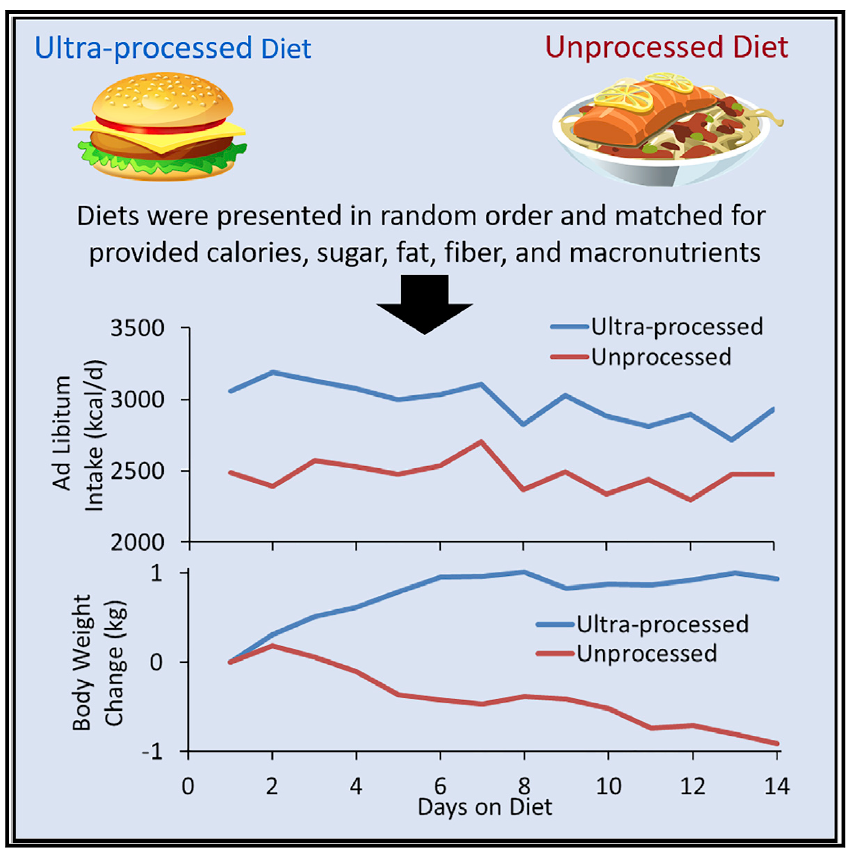 This study from the SUN project examined the impact of ultra-processed food consumption on telomere length in an elderly population. Shortening of the telomeres (caps at the end of chromosomes) is associated with aging and an increased risk of chronic disease. Oxidative stress and inflammation are the mechanisms associated with telomere shortening and can be modified through diet and lifestyle.

This cross-sectional study of 886 participants (645 men and 241 women) in Spain aged 57–91 years observed that higher consumption of ultra-processed foods was associated with a higher risk of having shorter telomeres. So yet another reason to avoid ultra-processed foods be it plant-based or not.

Here is a nice summary of what ultra-processed foods are, the foods we eat most commonly and how to recognise them. Krispy Kreme donuts are right up there and sadly biscuits and cakes for elders will do them no favours.

Which diet pattern has been shown to lengthen telomeres? No prizes for guessing correctly…. a low fat whole food plant-based diet!