No Meat May is a campaign and registered charity launched in 2013 that challenges people to eliminate meat from their diets for 31 days, for 4 big reasons (health, environment, animals, and food security). This week I hope to provide you with some science-based incentives to join the campaign. 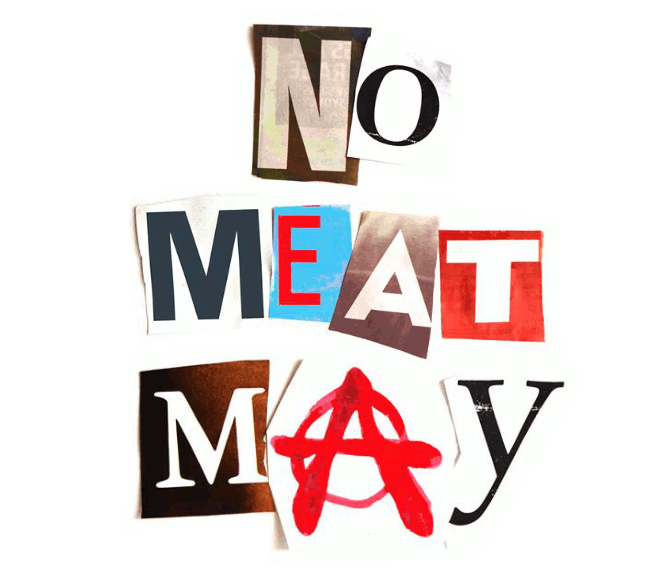 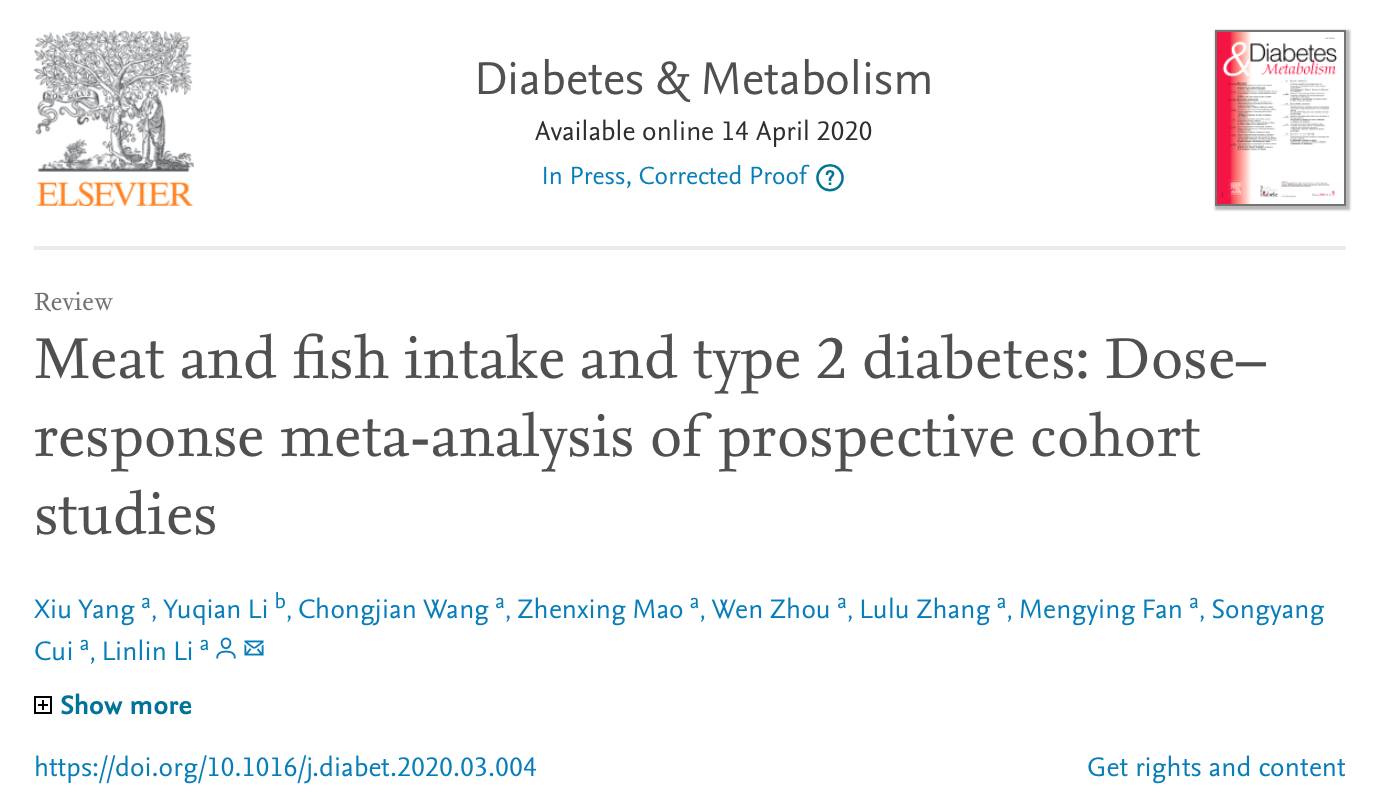 RED AND PROCESSED MEAT INCREASES THE RISK OF TYPE 2 DIABETES: This paper provides a meta-analysis of prospective cohort studies, including 28 articles with data from 25 studies and participants from the US, Europe and Asia. Total meat, red meat and processed meat consumption significantly increased the risk of type 2 diabetes in a dose-dependent manner — that is, the more you eat the higher the risk. For every 100g of total and red meat and 50g of processed meat, the risk of type 2 diabetes increased by 36%, 31% and 46% respectively. Look how small a portion of meat actually is. 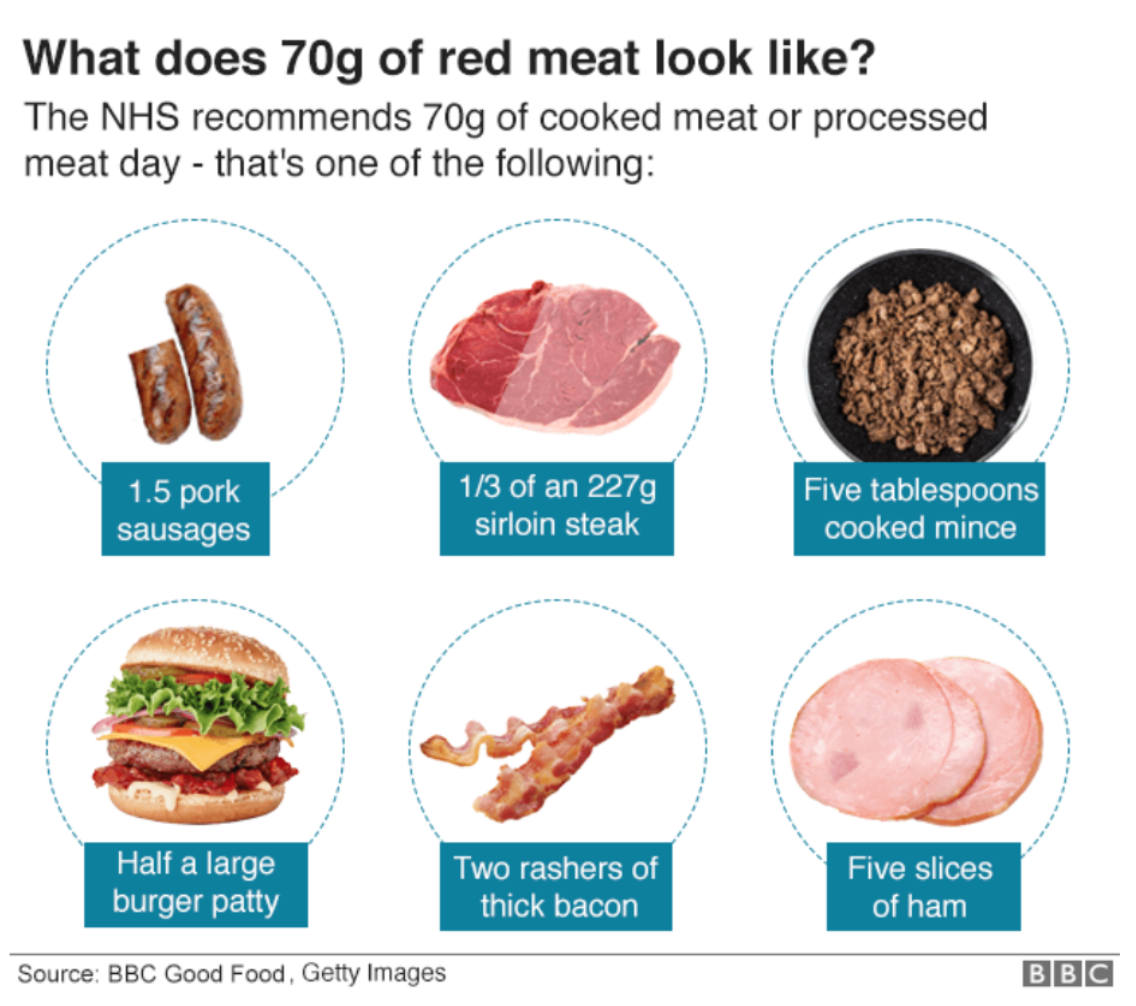 Type 2 diabetes is at epidemic proportions globally and is a disease that is almost entirely caused by a Western diet and lifestyle. In the UK, around 1 in 15 people have a diagnosis of type 2 diabetes. It is the commonest cause of blindness, kidney failure and limb amputation. It significantly increases the risk of cardiovascular disease, which remains the commonest cause of death in people with diabetes.

There are a number of reasons why a diet high in red and processed meat increases the risk of type 2 diabetes. The compounds and constituents in these meats promote insulin resistance, the underlying pathogenic mechanisms causing type 2 diabetes. These include saturated fat, nitrites and nitrates present in processed meat, advanced glycation end products generated when cooking meat, branched chain amino acids, haem iron, the generation of TMAO and the contribution of meat to an unhealthy gut microbiome. You can read more in my previous article on type 2 diabetes.

People following a healthy vegan diet have a greater than 50% lower risk of developing type 2 diabetes compared to meat eaters. Even if you have a diagnosis of diabetes, a plant-based diet could help reverse the condition. 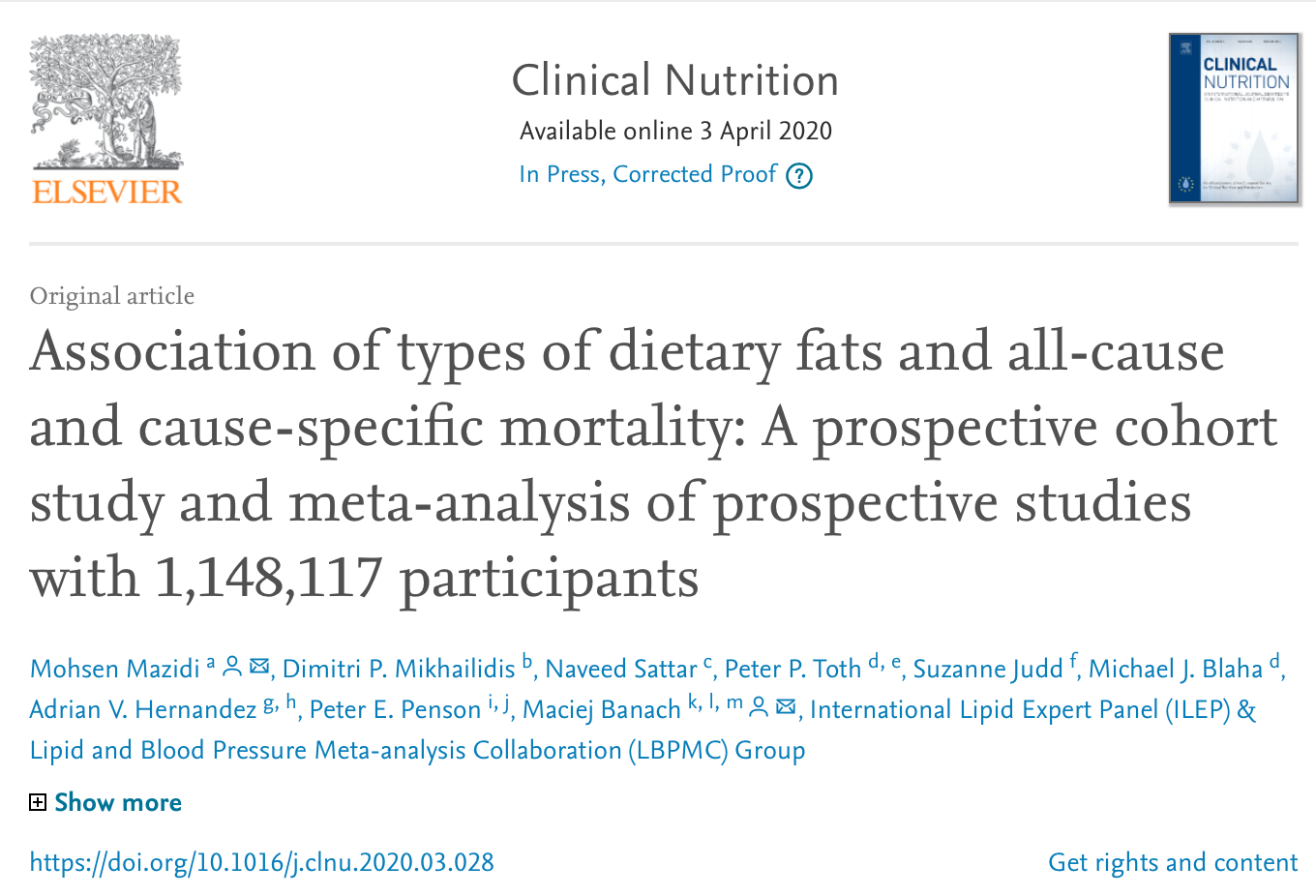 DIETARY FAT, CARDIOVASCULAR DISEASE AND MORTALITY: The topic of fat in the diet has caused heated debate for many years. Yet the science is clear; saturated fat consumption is associated with an increased risk of heart disease and death. Studies that have not shown such an association or even shown a benefit of saturated fat consumption have usually failed to take into account what is being eaten instead of saturated fat. In the words of Dr David Katz ‘there is more than one way to eat badly and humans have explored them all’. Replacing saturated fat with refined carbohydrates, such as food containing white flour and sugar, is just as bad for health and may even be worse than consuming saturated fat. So the question should always be — instead of what?

This is a large study including more than 1 million participants. The findings are as follows;

On a practical level, this study supports established healthy eating guidelines. This includes concentrating on the quality of the actual foods consumed rather than getting bogged down in the quantities of macronutrients (fat, carbohydrates, protein eaten). The optimal quantities of macronutrients in the diet is still a matter of debate. Minimise saturated fat consumption, which essentially means minimising consumption of animal-derived foods. Don’t forget that some plant-based foods also have high levels of saturated fat, including coconut and palm oil, which should be minimised in the diet. This recommendation is supported by the recent SACN report from the UK on saturated fat and health. Concentrate on eating healthy plant sources of fat such as nuts, seeds and avocado and small amounts of extra virgin olive oil if you wish.

Authors conclusions ‘For now, however, based on these data, and the results of prior trials, it seems sensible to focus on the quality of dietary fats with a reduction in SFA intake and increase PUFA and MUFA intake to lower future CVD outcomes and mortality’.

PREPREGNANCY CONSUMPTION OF ANIMAL FAT AND CHOLESTEROL INCREASES THE RISK OF GESTATIONAL DIABETES: This paper is a throw back to 2012, but I was not aware of it until this week. It complements the first 2 studies in this review and links together the risks associated with consuming a diet high in animal-derived fat (saturated fat and cholesterol) and the risk of diabetes, but this time in pregnancy. Gestational diabetes shares all the same diet and lifestyle risk factors as type 2 diabetes but also increases the risk of adverse outcomes for the baby. Insulin resistance is the key mechanism, which we already know is exacerbated by the consumption of saturated fat.

This study included 13,475 women who reported a singleton pregnancy between 1991 and 2001 in the Nurses’ Health Study II. There were 860 cases of type 2 diabetes in the 10 years of follow-up. The purpose of the study was to investigate the impact of prepregnancy dietary fat consumption on the risk of gestational diabetes, and whether the type and source of fat (animal vs vegetables) had a impact. The results showed that higher intakes of both animal fat and cholesterol prior to pregnancy significantly increased the risk of gestational diabetes in the order of 45–90% for those consuming the highest amount compared to those eating the lowest. Sustitution analysis showed that replacing animal fat with vegetables fat reduced this risk. This remained a significant finding after adjusting for other dietary and non-dietary risk factors.

So once again, this study confirms the importance of deriving fat in the diet from plant rather than animal sources.

BREAST MILK FROM VEGETARIAN AND VEGAN DIETS IS NUTRITIONALLY ADEQUATE: There is ongoing concern about the adequacy of a plant-based diet, particularly a vegan diet, for all stages of human life. This is despite the fact that major dietetic organisations around the world have confirmed well-planned vegan diets to be nutritional adequate. So it is good to see a paper that confirms vegetarian and vegan diets are adequate for breastfeeding mothers.

The study included 13 articles with women of adequate nutritional status, based on body weight and height. The results showed that the composition of breast milk does not differ significantly between meat eaters and non meat eaters with the exception of B12 and the long-chain omega 3 fatty acid DHA. Both B12 and DHA need to be supplemented during pregnancy and lactation. In addition, the paper goes on to conclude that breast milk from vegans who have supplemented with B12 and DHA can be just as valuable as breast milk from omnivores for milk donation to milk banks.

Check out our factsheets on pregnancy and children for more information. 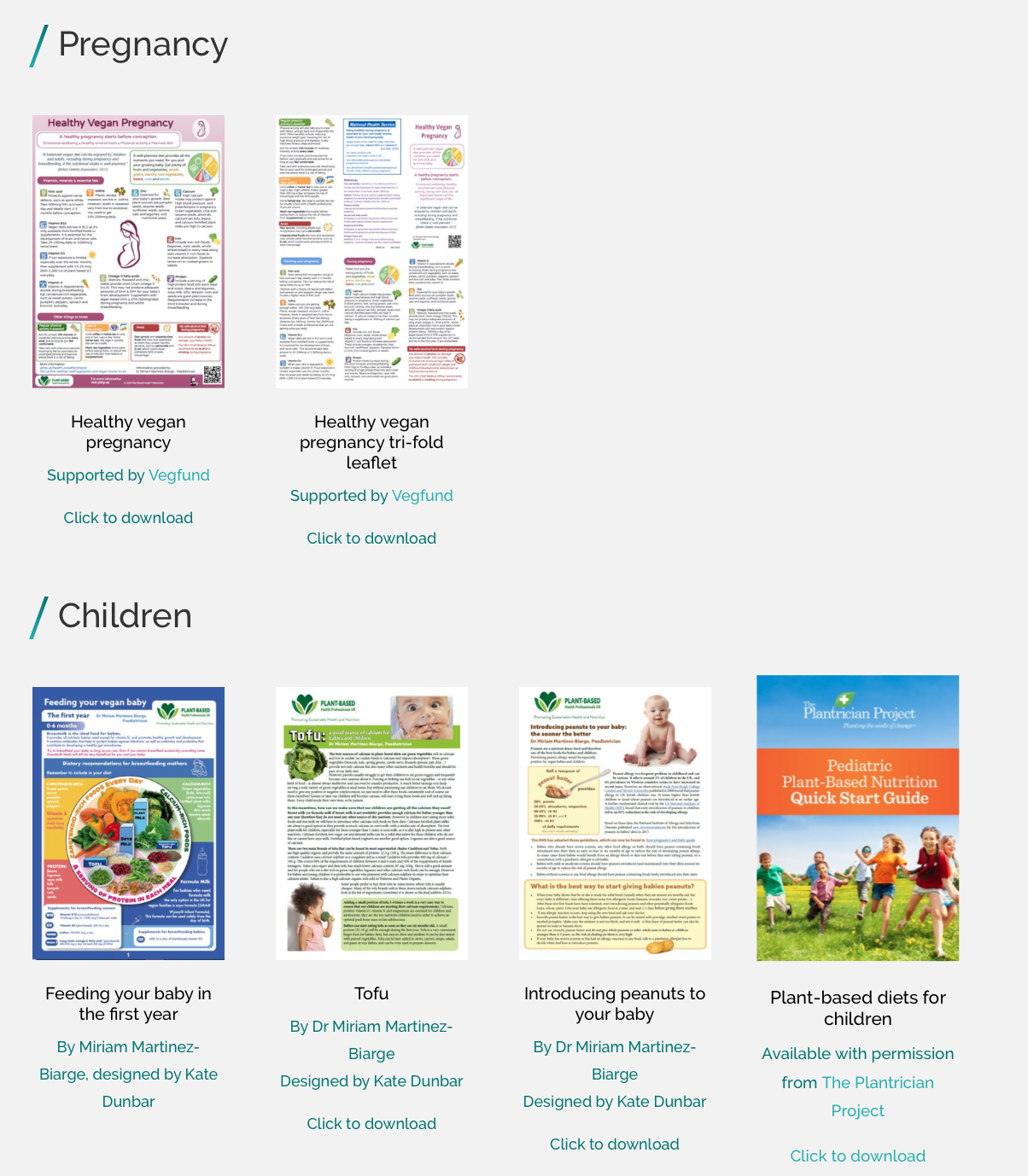 FOOD CHOICES AND PANDEMICS: It is difficult not to keeping coming back to this topic. It is clear to those that delve just a little below the surface that our global food system is not only destroying the planet but is contributing to the generation of new human infections with pandemic potential. The current SARS-CoV-2 pandemic is just one example of many over the last century, highlighted in the video. I am pleased that health professionals and scientists continue to highlight the important link between our desire to eat animals and the crisis we are facing. A couple of good articles from this week are highlighted below.

The other lesson we are learning is that diet and lifestyle-related chronic illness is increasing the risk of poor outcomes from infection with SARS-CoV-2. People with an underlying health condition are significantly more likely to require hospitalisation with the infection and more likely to die.

The image below summarises data from 5700 cases of COVID-19 (the disease caused by the virus) in New York. 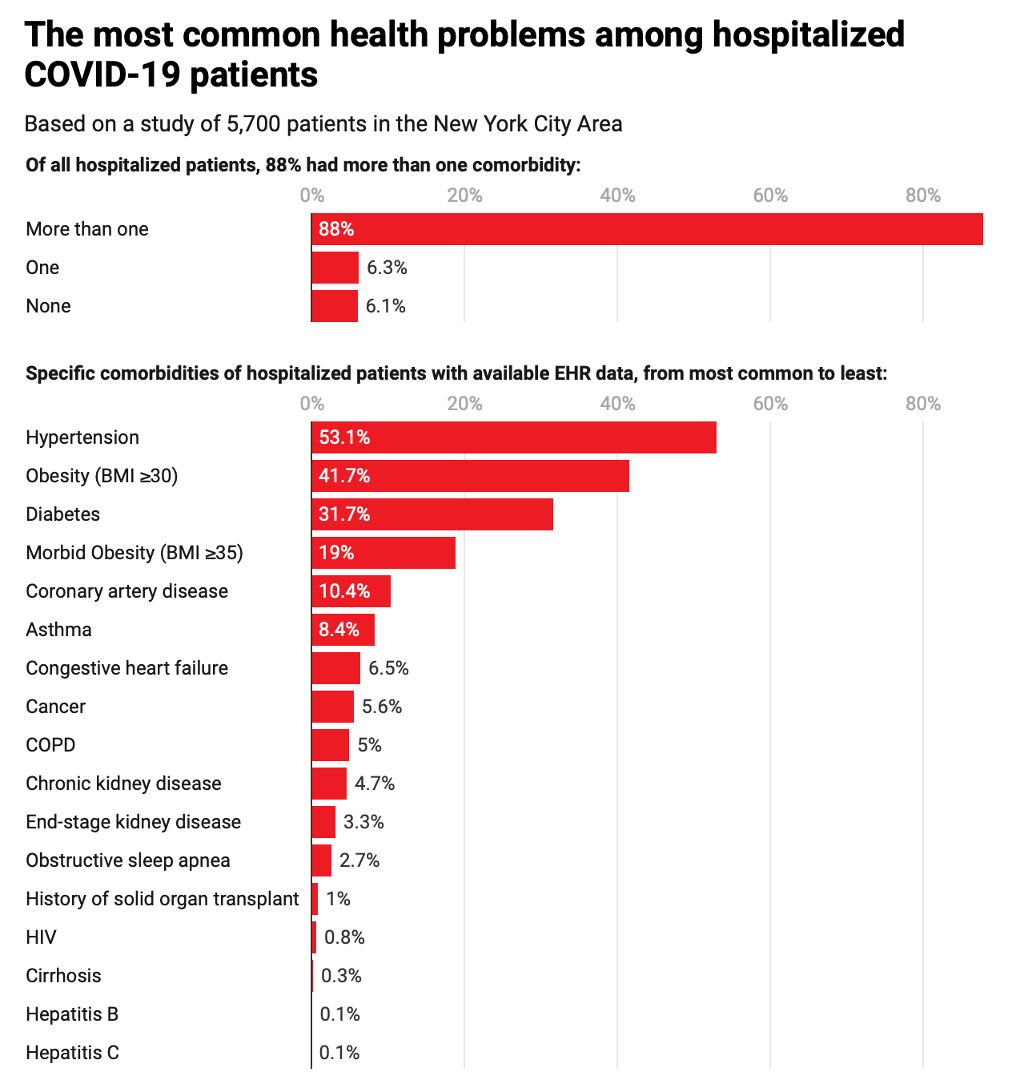 The majority of these chronic diseases could have been prevented by addressing diet and lifestyle factors. The paper below summarises these observations. It reminds us that the Western diet pattern high in saturated fats, sugars, and refined carbohydrates promotes inflammation and oxidative stress and impairs the immune response to viruses. The authors also hypothesize that inflammation caused by COVID-19 may have long-term consequences in those that recover, leading to chronic medical conditions such as dementia and neurodegenerative disease, likely through neuroinflammatory mechanisms that may be compounded by an unhealthy diet. Thus access to healthy foods and making healthy choices now and beyond this pandemic is going to be crucial to surviving the longer term impact. 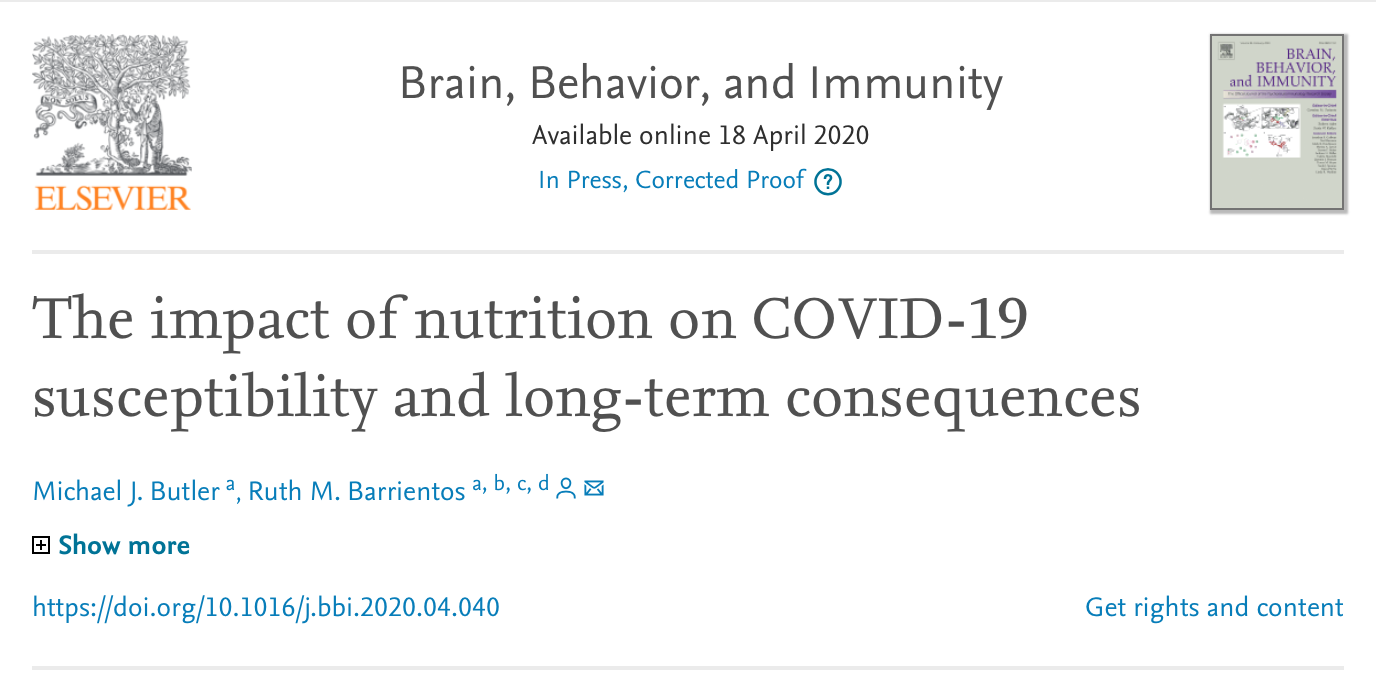 Authors conclusions; ‘Therefore, it is our recommendation that individuals refrain from eating foods high in saturated fats and sugar and instead consume high amounts of fiber, whole grains, unsaturated fats, and antioxidants to boost immune function.’ Sounds like a whole food plant-based diet to me!