Are vegan diets deficient in choline?

In the Summer of 2019, a rather controversial opinion piece about the lower choline content of plant-based diets was published in the journal BMJ Nutrition, Prevention and Health. The article suggested that there is a looming ‘choline crisis’, with implications for brain health. Foods with the highest level of choline are meat, fish, eggs and dairy. The media latched onto the article and published rather misleading stories suggesting vegans were risking their brain health due to lack of choline in the diet. Of note, the author of the BMJ article, Emma Derbyshire, is a member of the Meat Advisory Panel, a conflict of interest which was not disclosed in the original publication and led to several revisions of the article. Luckily, PCRM and the UK Vegan Society put the record straight. There is no evidence that plant-based diets are deficient in choline or increase the risk of cognitive impairment. In fact the opposite may be true with non-meat eaters having a lower risk of dementia. No dietary targets for choline intakes have been set in the UK. In the U.S. the recommended daily intake of choline is 550 mg for men and 425 mg for women, although the intake is lower in most people. The European Food Standards Agency has set 400mg as an adequate intake for adults.

A subsequent publication to the above mentioned opinion piece examined the association of choline intake with cardiometabolic and all-cause mortality in 3 prospective studies including 49,858 black, 23,766 whites and 134,001 chinese participants. During a median follow up of 11.7 years, 28,673 deaths were identified, including 11,141 cardiometabolic deaths. The study found that high intakes of total choline and certain choline-containing compounds were associated with increased risk of cardiometabolic mortality, especially diabetes and ischaemic heart disease mortality. Although the mechanism of this association was not possible to establish, the authors conclude that it may be beneficial to reduce choline intake by ‘Replacing major food sources of choline (i.e., red meat and eggs) with plant-based foods (e.g., vegetables, nuts, and legumes)’.

Choline may indeed be important for brain health but there is no evidence to support the fact that choline in the diet needs to come from animal foods and many reasons why it’s best obtained from plant sources. Choline is present in the cell membranes of all plants and animals. As with many nutrients, more is not always better. It is perfectly possible to obtain enough from whole plant sources, with soya, quinoa Brussel sprouts and broccoli being some of the best sources. In fact soya contains more choline than chicken or fish. 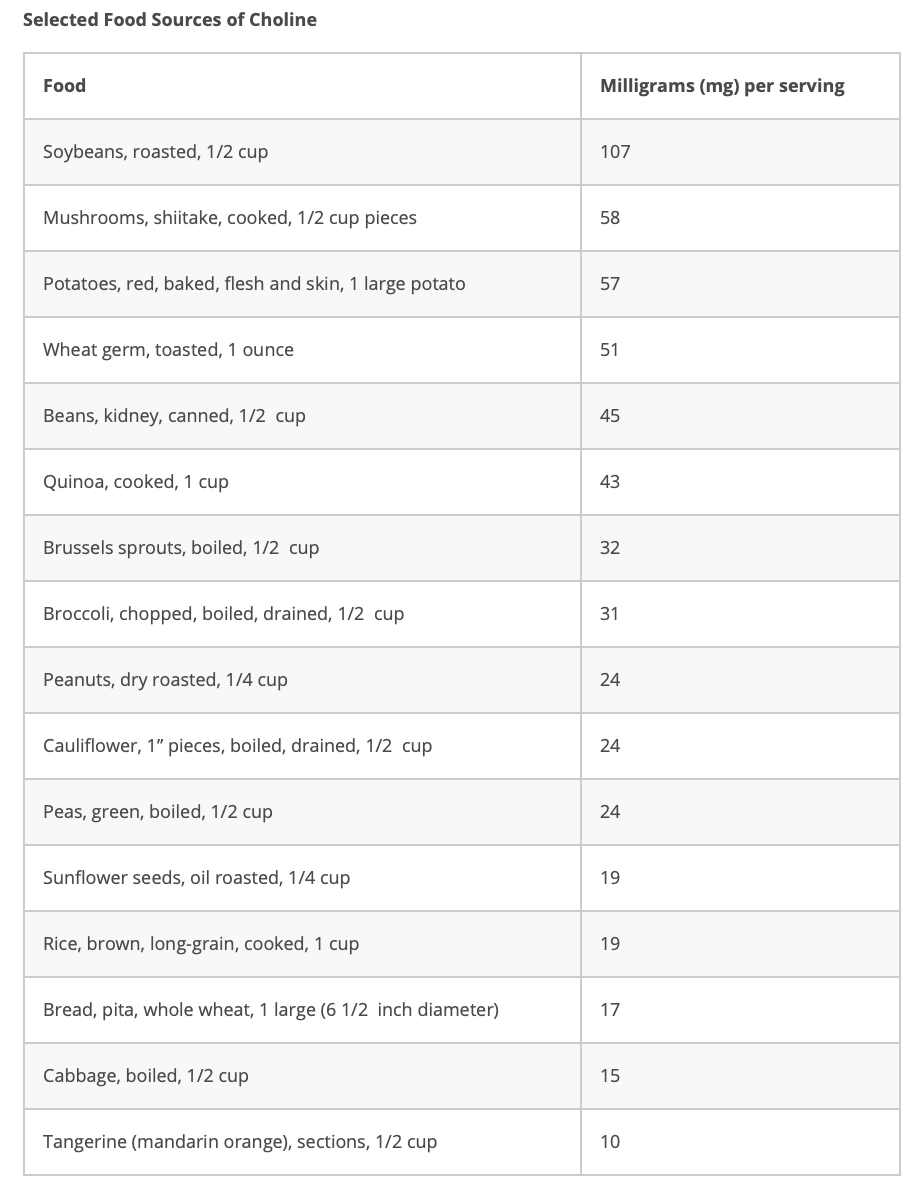