It is increasingly difficult to keep up to date with nutrition science and media stories and the number of publications on the subject continue to increase. So I bring you my weekly highlights on the subject of plant-based nutrition and human health. 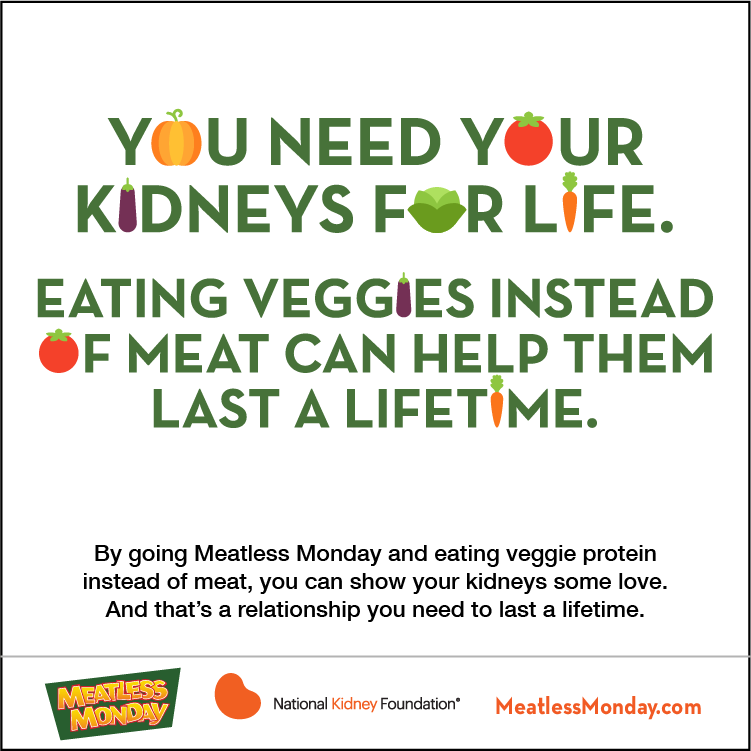 2. The team at PCRM.org have published an excellent review on plant-based diets and rheumatoid arthritis (RA). Although data supporting plant-based diets for RA is not vast, a common theme is emerging. Studies show that RA symptoms, including joint pain, can be influenced by diet. Symptoms are often exacerbated by excess body weight and diets high in animal protein and saturated fat. Diets that empahsise whole plant foods are associated with lower BMI, have anti-inflammatory properties and reduce pain and inflammation. Diets high in dietary fibre from whole plant foods lead to improvements in the gut bacteria composition and increase bacterial diversity, which is associated with improvement in symptoms in patients with RA. Additionally, in some patients, certain foods trigger symptoms, yet a vegan diet comprised of fruits, whole grains, legumes, and vegetables helps eliminate many common trigger foods, leading to improvements in symptoms.

3. More sensationalised headlines, but what is this all about? 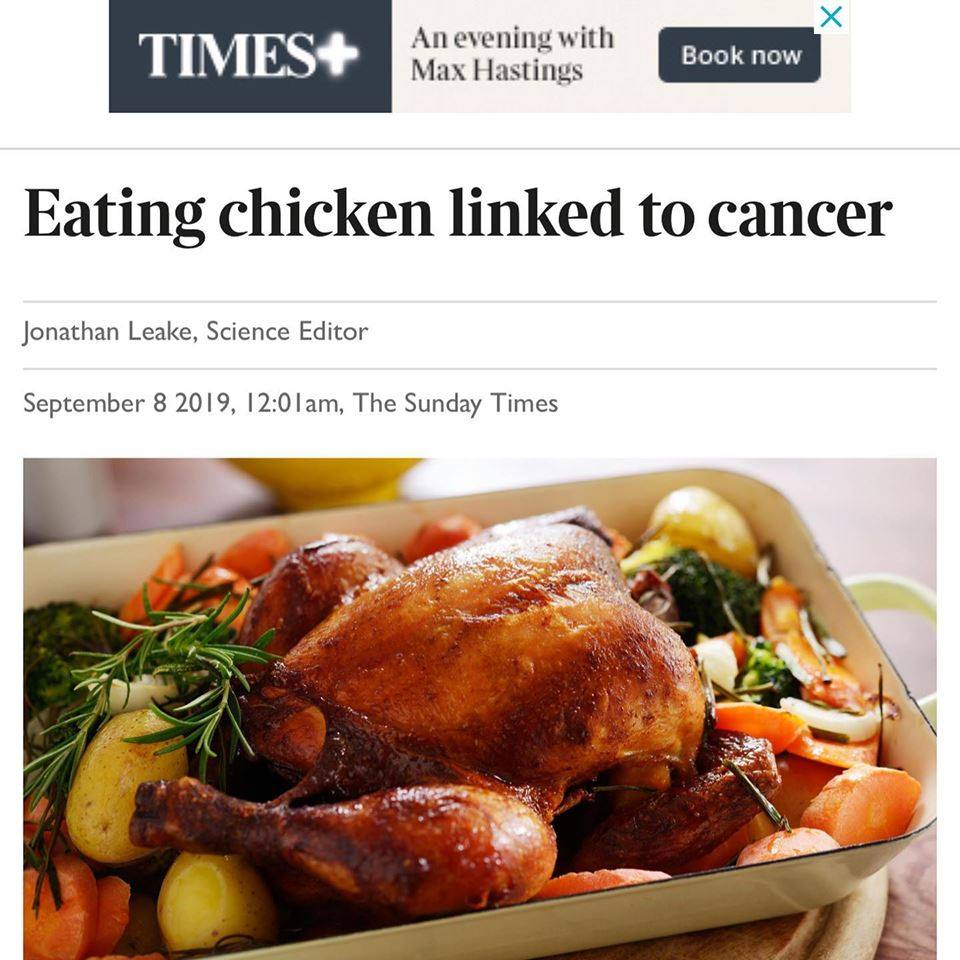 The study has only been presented in abstract form and reports data from the UK Biobank. 500,000 participants, aged 40–69 yrs were recruited between 2006–2010 in the UK. Data on diet, environment, genetics, health outcomes and much more have been collected. In this analysis performed after a mean of 5.7 years follow up, 23,117 participants were diagnosed with cancer.
The data on red and processed meat consumption confirm those of many other studies — that is an increased risk of colorectal cancer, breast and prostate cancer. The headlines were generated from the findings that poultry consumption increased the risk of malignant melanoma (worst type of skin cancer), prostate cancer and non-Hodgkin lymphoma. Most people consider white/poultry meat as fairly harmless or even good for health, hence the alarm. Could this be a genuine result? Well it’s not the first study to suggest an association. In the EPIC study, poultry consumption also increased the risk of B-cell lymphoma. Potential reasons could be exposure to organic pollutants or transmission of a poultry-related virus. Several human viruses increase the risk of lymphoma so an animal virus is plausible. Poultry slaughter house workers have an increased risk of liver and pancreatic cancer, pointing towards an infective agent. The health professionals follow up study has shown an increased risk of lethal prostate cancer with choline intake and chicken is a major source of choline. However, not every study has confirmed these findings. There are less data on the link between diet and malignant melanoma. Obesity is a risk factor and chicken consumption is associated with weight gain. Fruit and vegetable consumption reduces the risk of melanoma. The link between meat and melanoma has not been consistent. So the take home message has to be to concentrate on eating the foods that have consistently been shown to have anti cancer properties — fruits, vegetables, whole grains and beans — dietandcancerreport.org 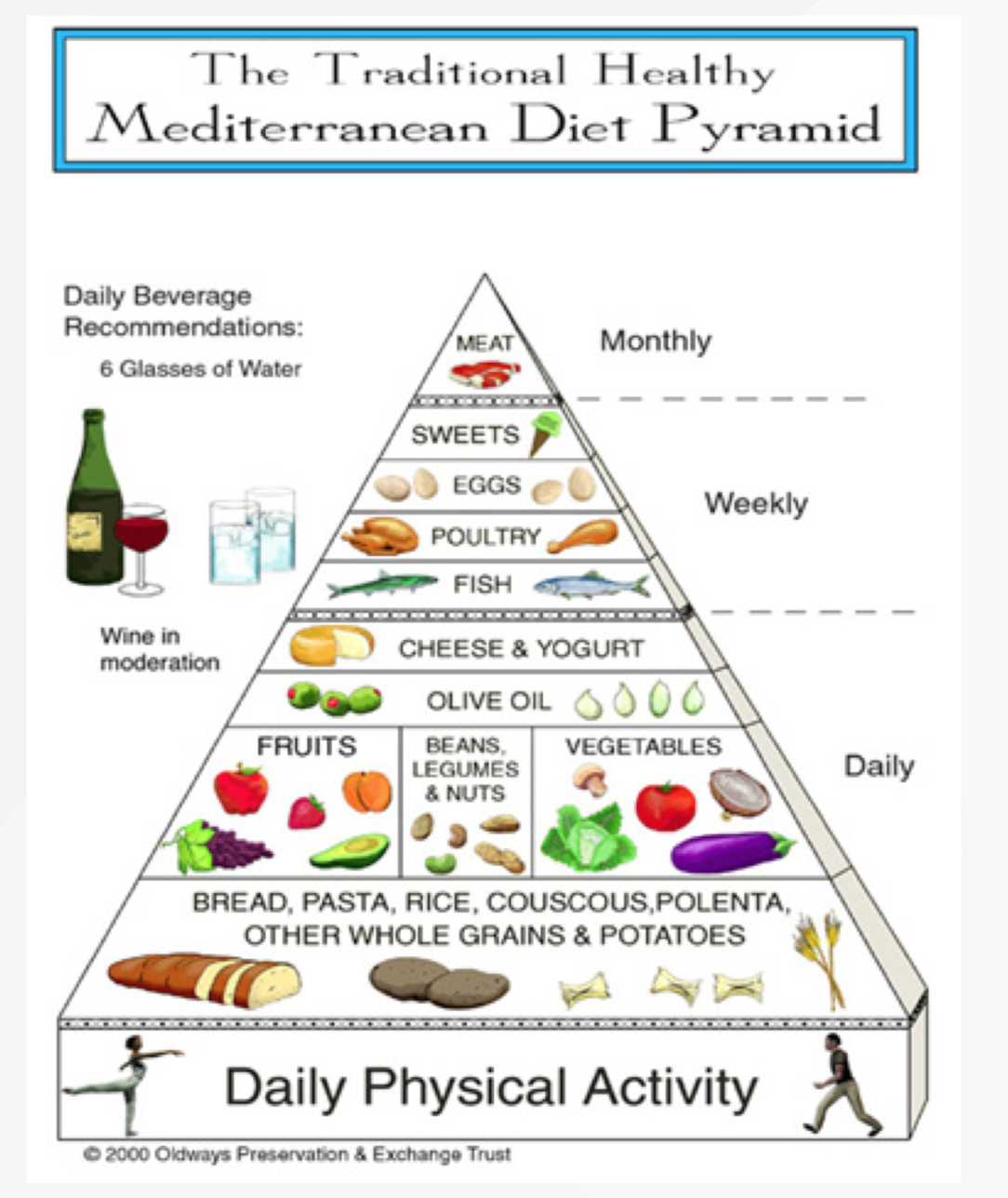 We known that the key components of the Mediterranean diet pattern are the whole plant foods, including fruits, vegetables, whole grains and legumes. Fish and olive oil consumption is also thought to contribute to the benefits of this diet pattern but to a lesser degree than the plant foods. Given that Dementia incidence is rising and conventional medicine has little to offer, prevention is the key. Over a third of dementia cases could be prevented through lifestyle interventions, with diet from middle age being the most important factor. The WHO has published guidelines on prevention of dementia earlier this year. It emphasises a diet high in fruits, vegetables, whole grains and legumes. For those wanting to learn more about the Mediterranean diet pattern, this is a useful toolkit from Canadian dietitians. 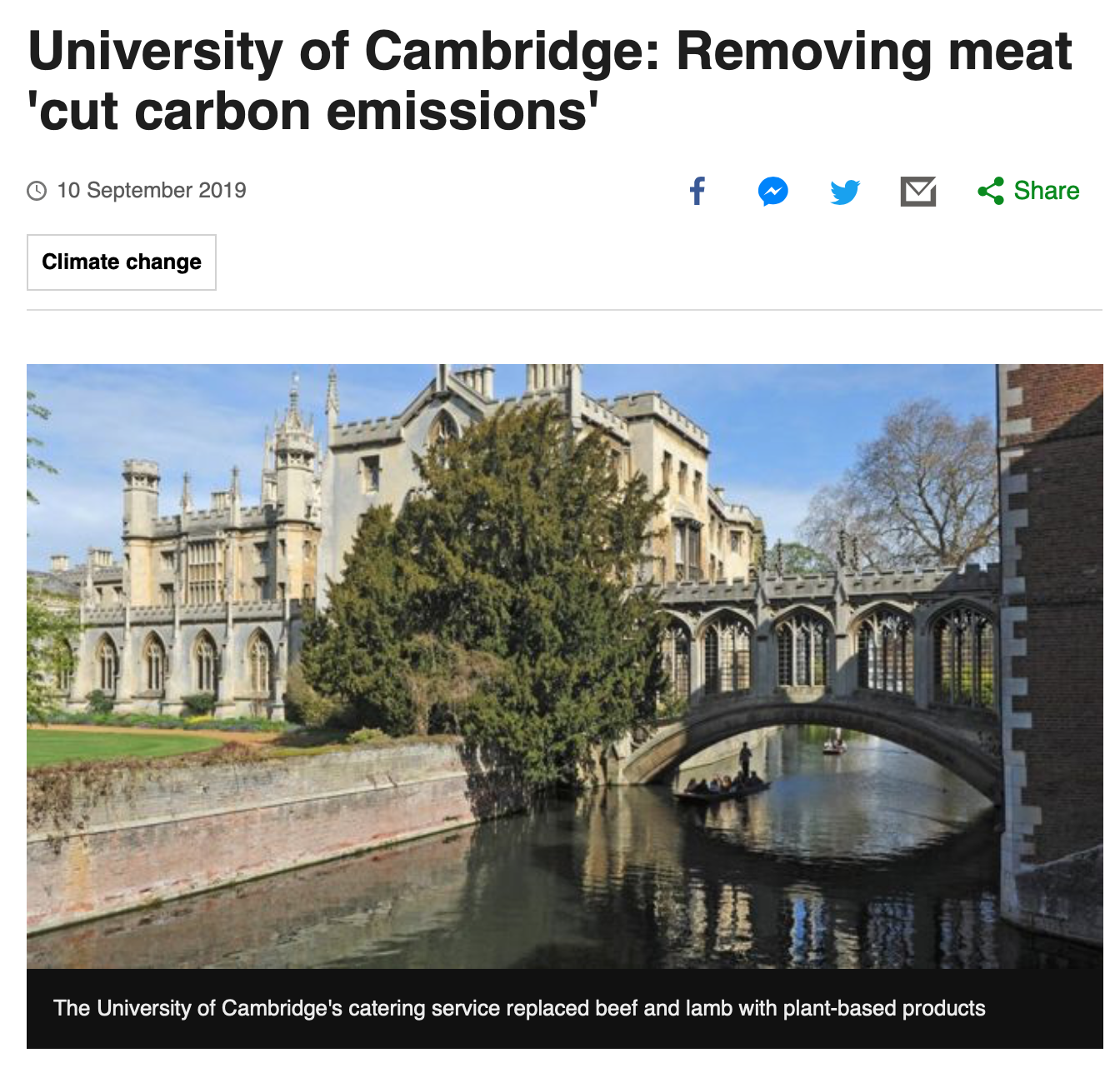 5. Bravo to Cambridge University. In October 2016, the University Catering Service (UCS), which is responsible for 14 outlets across the University of Cambridge and over 1,500 hospitality events each year, implemented the sustainable food policy, which focused on the areas with the biggest impact without compromising on cost. These were:

They report reducing food-related carbon emissions by one third. I think it is now time that healthcare institutions do the same. The changes would inevitably benefit the health of patients and the workforce and help change food habits to healthier more sustainable ones.

6. This does not immediately appear to be a story about plant-based diets. 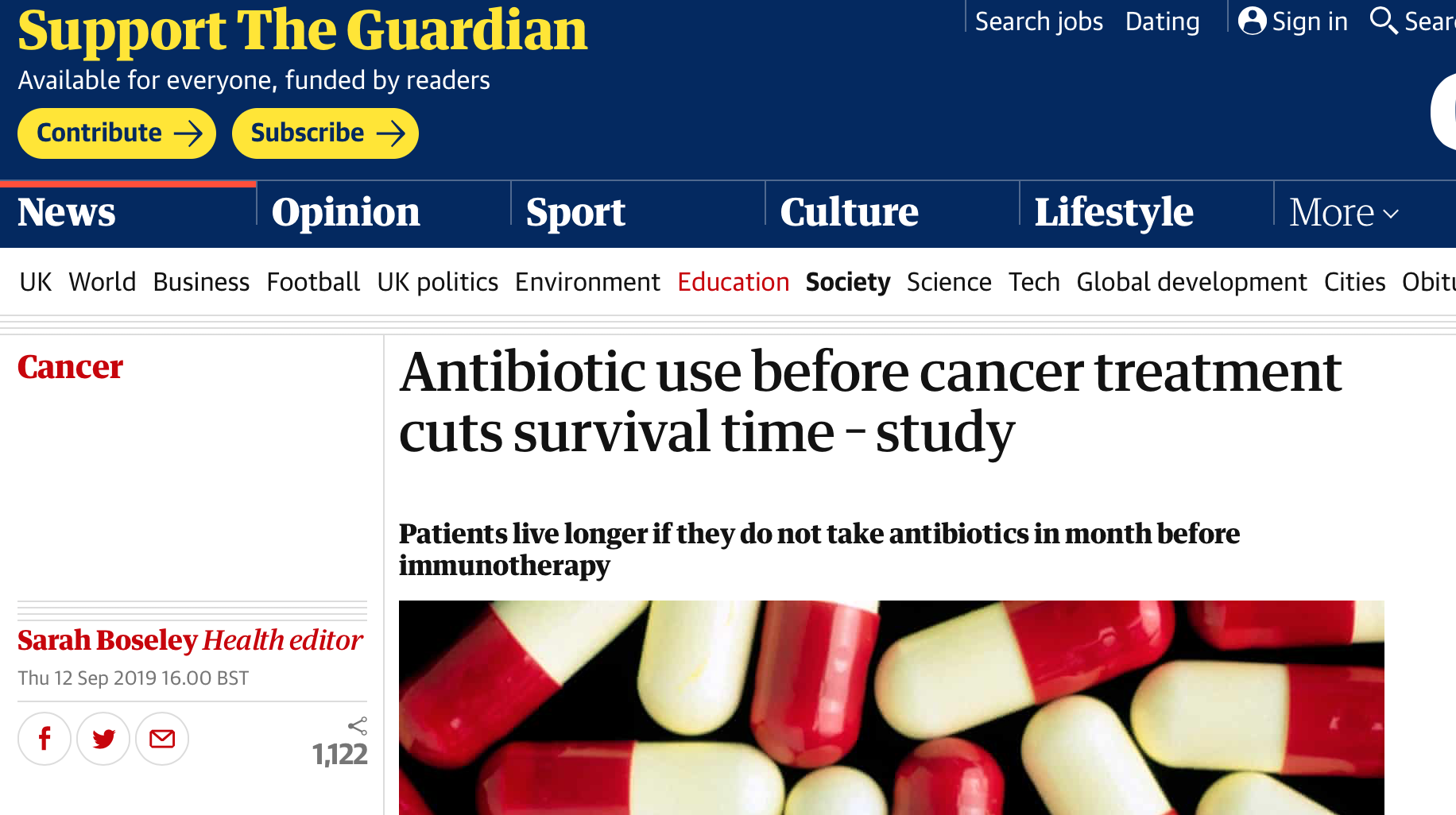 However, it is increasingly clear that response to new immune therapies in patients with cancer are associated with the health of the gut microbiome. A healthy gut microbiome is one that has a predominance of healthy bacteria and lower levels of pathogenic bateria, plus increased diveristy of bacteria. The healthy bacteria ferment dietary fibre which leads to the production of short chain fatty acids, which are involved in numerous health promoting functions in the body, including maintaining the health of the gut lining, promoting a healthy immune system, producing vitamins and hormones, and reducing inflammation. Antibiotic use adversely affects the health of the gut microbiome. This study showed that among 196 patients with a variety of different cancers, antibitic use in the 30 days prior to starting immune therapy led to reduced response to the therapy and a worse survival. Now, this does not prove cause and effect and it could be that sicker patients required more antibiotics and they were destined to do badly. However, other studies have reported similar findings relating the health of the gut microbiome and response to immune therapy and also stem cell transplantation. We know full well that a health gut microbiome requires a diet high in fibre from whole plant foods, thus dietary intervention in patients with cancer is an attractive option for improving responses to cancer treament.