LOW CARB HIGH FAT DIETS CAN NOT BE RECOMMENDED FOR DIABETES PREVENTION: This is a useful paper from the UK trying to answer the question as to whether low carbohydrate, high fat (LCHF) diets are associated with a lower risk of developing type 2 diabetes (T2DM) and in those with T2DM whether a LCHF diet can help control the disease.

The study used data from the UK national Diet and Nutrition survey (2008–2016). 3234 individuals were included and 194 had T2DM. The results showed that with an increase in fat and protein consumption and reduction in carbohydrate consumption there was an increased risk of developing T2DM. In those with T2DM, LCHF diets resulted in worse control of the disease.

There are several limitations to this study including the fact it was a cross-sectional study, so reverse causation can not be excluded. Nonetheless, there are NO data supporting LCHF diets for prevention of T2DM and in fact there is much more data reporting adverse long term health outcomes such as increased risk of cardiovascular disease, cancer and death from any cause with LCHF diets.

The authors conclusion ‘There has been very limited evidence supporting the use of LCHF diets for the prevention of T2DM. To our knowledge, this is the first study investigating whether carbohydrate intake and LCHF dietary pattern relate to HbA1c concentration in a population-based cross-sectional study of nutrition and health. Surprisingly, given the enthusiasm for LCHF diets in the media and from some professional commentators, we found that lower carbohydrate intake was associated with significantly greater odds of T2DM and higher HbA1c concentration. Higher adherence to conventional dietary recommendations (basing meals on starchy carbohydrates, lower fat and saturated fat contents, eating more fruits and vegetables) was associated with lower HbA1c concentration’.

There is a large body of evidence supporting predominately plant-based diets for the prevention of T2DM, so stick with the science and eat a diet of mainly whole plant foods.

FIBRE, GUT HEALTH AND LUNG CANCER: This large study examines the association between fibre and yogurt intake and the risk of lung cancer. The pooled analysis included 10 prospective cohorts involving 1 445 850 adults from studies that were conducted in the United States, Europe, and Asia.

What did the study find? Those eating the most fibre (28g per day) and the most yogurt (57g/d) had around a 15–19% reduced risk of developing any type of lung cancer, even after adjusting for confounders such as smoking. Its worth taking into account that the average adult in the UK consumes only 19g of fibre/day.

What are the potential reasons? It is highly likely to be related to an improved gut microbiome as fibre and yogurt are pre and probiotics foods, which enhance the health and diversity of the gut microbiome. It is clear that healthy gut microbiome is associated with reduced risk of a number of chronic diseases, including cancer and may even be important in predicting response to cancer therapy. The mechanism may be through anti-inflammatory effects and modulation of the immune system.

What are plant sources of probiotics for those not consuming cows dairy? Fermented foods such as sauerkraut, kimchi and tempeh are good alternatives. Some plant-based yogurts also have live cultures. There are well documented benefits of a 100% plant-based/vegan diet for gut health and dairy is necessary for any aspect of human health

Conclusion: feed your gut bacteria with lots of fibre rich food and consider adding fermented foods to your diet. 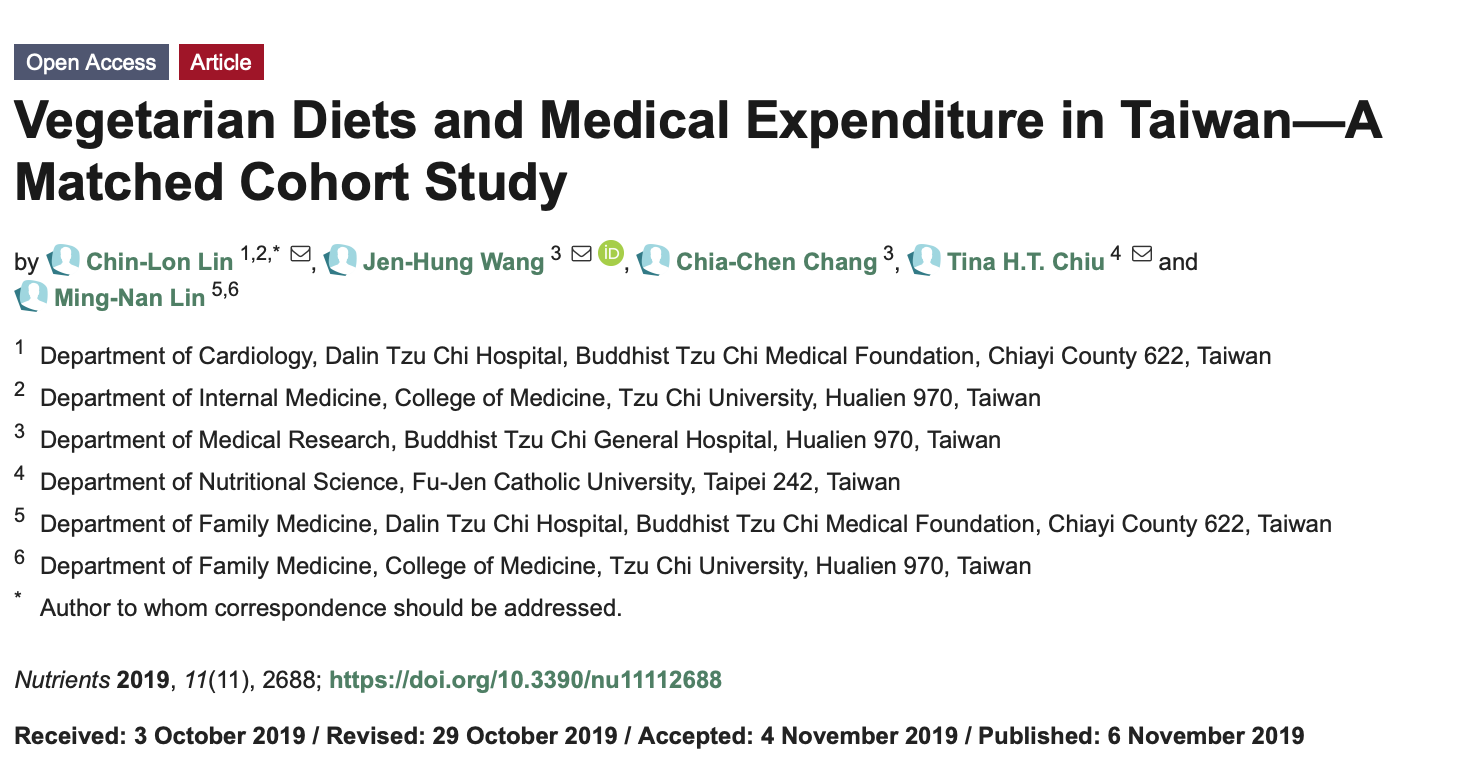 VEGETARIAN DIETS REDUCE HEALTHCARE EXPENDITURE: Results from prospective cohort studies continue to demonstrate that vegetarian and vegan diets lower the risk of chronic disease, including ischaemic heart disease, type 2 diabetes and certain cancers. However, does this translate into lower healthcare expenditure? This study from The Tzu Chi Vegetarian Study (TCVS) prospective cohort examines just this question. The study compared the health care utilization and medical expenditure of 2166 vegetarians and 4332 age-sex-matched omnivores. Diet and lifestyle questionnaires were self-administered and prospectively collected. 5-year average medical expenditure was calculated in vegetarians versus omnivores and the data was adjusted for age, sex, education, exercise habits, smoking, and alcohol drinking. Medical expenses related to non-diet associated lifestyle factors (smoking, alcohol drinking, active community volunteering, and religious emotional support) were estimated through a comparison with the published population medical cost data standardized to match the age and sex characteristics of the cohort. Tzu Chi vegetarians had significantly lower outpatient visits. This translated into 13% lower outpatient (p = 0.007) and 15% lower total medical expenditures (p = 0.008) when compared with the Tzu Chi omnivores. No difference in dental visits and expenses were found between diet groups. Specifically, vegetarians had lower expenses related to hypertension, dyslipidemia, depression, heart disease, and renal disease. Compared to Taiwan’s general population, as opposed to this cohort, the vegetarians had a 25 percent lower medical expenditure. 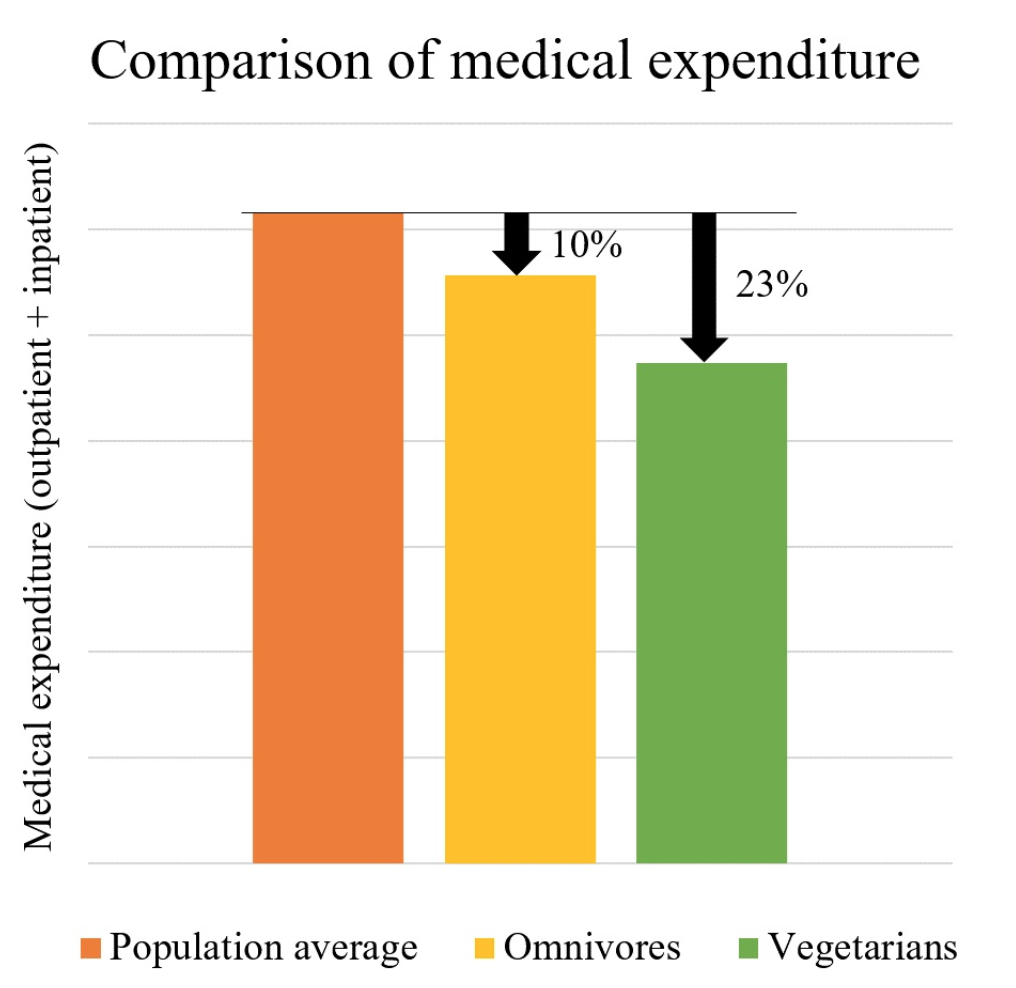 STUDENTS AT UNIVERSITY OF EAST ANGLIA TAKE ACTION FOR CLIMATE CRISIS: Is is wonderful to see that policy change at Universities is being driven by students. This action comes in the same week that the Lancet countdown on health and climate change publishes its report. The key message of the report — ‘The life of every child born today will be profoundly affected by climate change, with populations around the world increasingly facing extremes of weather, food and water insecurity, changing patterns of infectious disease, and a less certain future. Without accelerated intervention, this new era will come to define the health of people at every stage of their lives’. Under the recommendation for ‘mitigation actions and health co-benefits’ it states that ‘red meat from ruminants contributes 3GTCO2e in 2016 — 93% of total livestock emissions. Plant-rich diets could health to improve health and reduce greenhouse gas emissions’.

No surprise that farmers have criticised this decision, yet the science is undeniable and I hope that the University upholds this decision.