This week I cover gastrointestinal conditions, salt consumption, the vegan athletes heart and the impact of food-based dietary guidelines on health and sustainability.

HEALTHY LIFESTYLES AND GALLSTONES: Gallstone disease is a common problem in Western societies. There are two types of stones; cholesterol and pigment. Cholesterol stones are by far the most common and strongly associated with lifesytle factors. Healthy diet patterns such as the Mediterranean, DASH and Alternate Healthy Eating Index (AHEI-2010) have been shown to be associated with a lower risk. This study included 60,768 women from the Nurses’ Health Study (NHS) and 40,744 men from the Health Professionals Follow-up Study (HPFS), followed from baseline in 1986 to 2012. Six factors were used to define a healthy lifestyle score (HLS) based on previous associations with symptomatic gallstone disease: 1) following a healthy diet; 2) consuming a moderate amount of alcohol — 0.5–2 drinks/d for men and 0.5–1.5 drinks/d for women; 3) having a normal body weight; 4) being physically active; ≥150 vigorous-intensity or ≥300 moderate-intensity minutes per week 5) consuming coffee regularly ≥2 cups of caffeinated coffee per day; and 6) being a non-smoker. A healthy diet was defined using the AHEI-2010 and included 7 favorable foods [vegetables (except potatoes), fruits, nuts and legumes, whole grains, ω-3 (n–3) fatty acids, PUFAs, and moderate alcohol consumption] and 4 unfavourable foods/nutrients (red and processed meat, sodium, sugar-sweetened beverages, and trans fat). Alcohol consumption was considered separately within the healthy lifestyle score. Gallstone disease was based on self reports and validated by reviewing medical records, including ultrasound reports and history of cholecystectomy.

Number of healthy lifestyle factors and the risk of symptomatic gallstone disease in the Nurses’ Health Study (NHS) and the Health Professionals Follow-up Study (HPFS).

This large study highlights that the vast majority of symptomatic gallstone disease may be preventable. A note of caution. Recommendations regarding the benefit of moderate alcohol intake should be weighed against potential health hazards of alcohol consumption. Non-drinkers should not start alcohol consumption just to avoid the development of gallstones.

DIET AND FATTY LIVER: Non-alcoholic liver disease (NAFLD) is the accumulation of fat in the liver and is the commonest cause of chronic liver disease worldwide. Approximately 25% of patients with NAFLD have nonalcoholic steatohepatitis (NASH), which is associated with a 20% risk of progression to cirrhosis. The incidence of NAFLD is rising, with up to 20% of the UK population having some evidence of NAFLD. NAFLD is now the second commonest reason for liver transplantation in the UK. The key drivers of NAFLD are obesity, dyslipidaemia, insulin resistance and metabolic syndrome. These factors are intimately related to diet and lifestyle. Weight loss of at least 5–10% of body weight is a key part of management

This timely review provides a summary of the data on the role of diet and nutrition for weight loss in the management of NAFLD and NASH. The dietary factors associated with a higher incidence of NAFLD are higher consumptions of animal protein, saturated fat, refined carbohydrates, free sugars (including fructose but not from whole fruit), sugar-sweetened beverages and alcohol. Protective factors include high fibre foods such as fruits, vegetables, whole grains and legumes and also coffee consumption. On review of beneficial dietary patterns for prevention and management of NAFLD, those high in unprocessed plant foods, including soya, were found to be most beneficial, including the Mediterranean, DASH, vegetarian and vegan diets. The review acknowledges the lack of high quality randomised controlled studies but also warns against diets focusing specifically on reducing carbohydrate or fat intake as these diets miss out on the benefits of whole grains, fibre, and unsaturated fats, which do not need to be minimized in the diet.

There have been a couple of previous studies that have examined specifically the impact of whole plant foods on the incidence of NAFLD. The plant-based diet index is a dietary scoring system which gives positive points for whole plant foods and negative points for animal-derived foods and processed foods. When diet patterns have been examined in this way, the more the diet is centred around healthful plant foods the lower the risk of NAFLD. A high score on the plant-based diet index was associated with a 21% reduction in risk of NAFLD, but unhealthy plant-based diets (made up of processed foods and refined carbohydrates) did not protect against NAFLD and in fact increased the risk.

The impact of vegetarian diets on the incidence of NAFLD was examined in the Tzu Chi Health Study from Taiwan. This study included 2127 non-vegetarians and 1273 vegetarians who did not smoke or habitually drink alcohol and did not have hepatitis B or hepatitis C infection. Vegetarians had a 21% reduced risk of NAFLD. Replacing a serving of soya with a serving of meat or fish was associated with 12%–13% increased risk, whereas replacing a serving of whole grains with a serving of refined grains, fruits, and fruit juice was associated with 3%–12% increased the risk of NAFLD.

SODIUM AND HEALTH: This review article is part of the BMJ Food for Thought series. It summarises the data on sodium consumption and health. Adequate sodium can be obtained from the consumption of whole foods. But the use of salt, sodium chloride, in processes and packaged foods has led to a hugh overconsumption of sodium globally such that excess sodium consumption in now the top dietary risk factor for chronic illness and death. Table salt is 40% sodium and 60% chloride. Current mean population sodium intake is about 3600 mg/day in the US, and the estimated global average is 3660–4000 mg/day. Recent guidelines in the US, Canada, and the UK call for lowering sodium consumption below 2300–2400 mg/day. The American Heart Association recommends no more than 2300 mg/day but suggests an ideal limit of 1500 mg per day for most adults, especially those with high blood pressure. The World Health Organization calls for <2000 mg/day.

Regarding health outcomes, it is clear that there is a linear relationship between salt consumption and blood pressure. Reducing sodium intake reduces blood pressure, especially in people with hypertension. The controversy arises in how low to go in sodium recommendations because some studies have shown that at very low intakes there is actually a higher risk of cardiovascular disease. The reasons for this are not clear but could include measurement error, residual confounding, reverse causation and pre-existing illness. Nonetheless, most people in high and middle income countries are consuming too much salt and the public health message has to be to reduce consumption, primarily through the reduced consumption of processed, pre-prepared foods and meals eaten outside of the home.

Top tip: To achieve a low salt/sodium diet, aim to keep sodium intake to 2000mg or less per day. Therefore, when checking nutrition labels, choose ‘foods’ that have a sodium level less or equal to the calories per serving. Thus, someone eating a 2,000 kcal diet will keep sodium intake at around 2000mg.

SODIUM AND THE GUT MICROBIOME: Continuing on the topic of sodium and salt consumption, this study examined the impact of sodium consumption on the health of the gut microbiome by measuring short-chain fatty acids (SCFAs). SCFA’s are produced by healthy gut bacteria and involved in maintaining the integrity of the gut lining, maintaining a healthy immune system, synthesis of hormones and vitamins in the gut and much more.

145 participants (42% blacks, 19% Asian, and 34% females) were included from a randomized, double-blind, placebo-controlled cross-over trial of sodium reduction with slow sodium or placebo tablets, each for 6 weeks. Sodium reduction resulted in a rise in eight SCFAs measured in the serum and was associated with a reduction in blood pressure, with a greater impact in women compared with men. This study suggests that reducing salt consumption may benefit the gut microbiome.

A lesser know fact about salt consumption is its association with autoimmune disease, which is nicely summarised in this review article. Salt can adversely affect the function of T cells and other immune cells, result in a pro-inflammatory response. 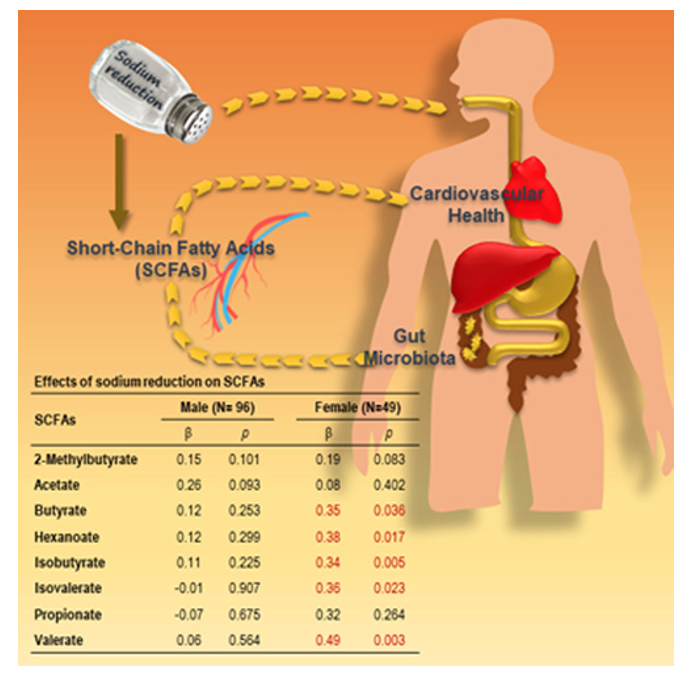 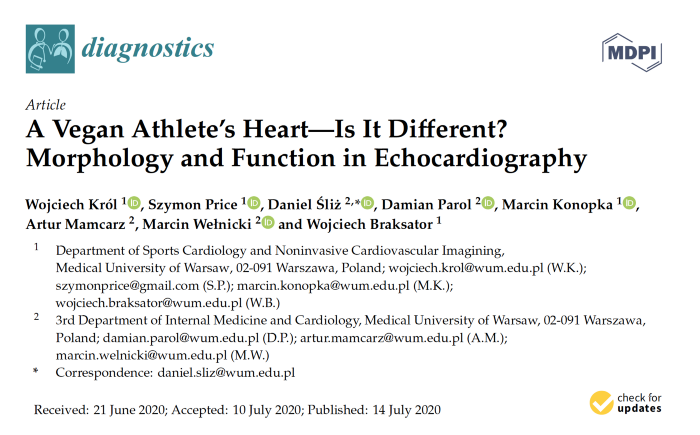 WHAT DOES THE HEART OF A VEGAN ATHLETE LOOK LIKE: This is a novel study and the first of its kind. With the rise of athletes adopting a vegan diet, this study investigated whether the morphology and function of the heart differed between amateur athletes on a vegan diet compared to an omniverous diet by using echocardiographic parameters. 22 vegan amateur runners were compared to 30 non vegan runners. Anthropometric parameters were measured, detailed diet history was taken, respiratory function with ECG was tested on a treadmill and resting echocardiographic tests were conducted. The echocardiographer was blinded and did not know the participants diet group.

The results showed that compared to the control group, vegans had a significantly lower intake of protein and saturated fat and higher intake of carbohydrate and unsaturated fats. Exercise capacity, measured as maximal oxygen consumption (VO2max, L/min) was significantly higher in the vegan group and in those consuming more carbohydrates. On echocardiography, the vegan group demonstrated characteristics that are likely to be beneficial for longer term heart health i.e. lower relative wall thickness and better left and right ventricular function.

Despite this being a small study at one point in time, they are encouraging and add to the broader literature which suggests that vegan diets are suitable and safe for athletes and may even have benefits compared to other diet patterns.

FOOD BASED DIETARY GUIDELINES: National and international food guidelines continue to be a hotly debated topic. The US is currently reviewing their guidelines and the scientific committee have just published their recommendations. These are now open for public consultation. The cholesterol deniers are horrified by the recommendations to limit red and processed meat and the vegans are sad to see that dairy continues to be promoted despite the fact that more than 70% of communities of colour are lactose intolerant and dairy has no role in their diet. Health Canada, in my view, have led the way with their 2019 guidelines which have completed de-emphasised meat and removed dairy as a food group.

This paper examined food based dietary guidelines (FBDG) from 85 countries and compared them to dietary recommendations of the World Health Organization and the EAT-Lancet Commission on Healthy Diets from Sustainable Food Systems. The authors assessed the impact on health and the sustainability of these guidelines comparing the impacts to global health and environmental targets, including the Action Agenda on Non-Communicable Diseases, the Paris Climate Agreement, the Aichi biodiversity targets related to land use, and the sustainable development goals and planetary. 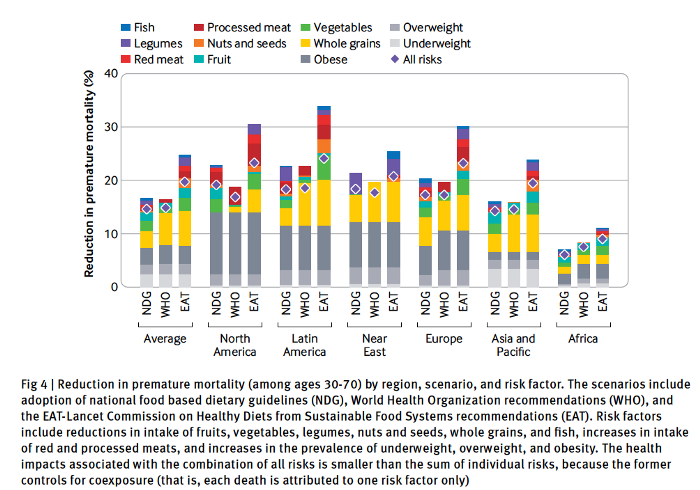 Overall, the results showed that if national FBDGs were actually adopted there could be a reduction in premature death by an average of 15%. However, most guidelines were not compatible with the climate change, land use, freshwater, and nitrogen targets. This includes dietary guidelines from the UK, US and China. In contrast, adoption of the Eat-Lancet planetary health diet could result in a greater reduction in premature mortality and more than three times greater reductions in greenhouse gas emissions, and general attainment of the global health and environmental targets. The study concludes that to make country-based food guidelines healthier and more sustainable there has to be more emphasis and clear messaging on reducing/eliminating red/processed meat and increasing the conusmption of whole grains, fruits and vegetables, nuts and seeds, and legumes. 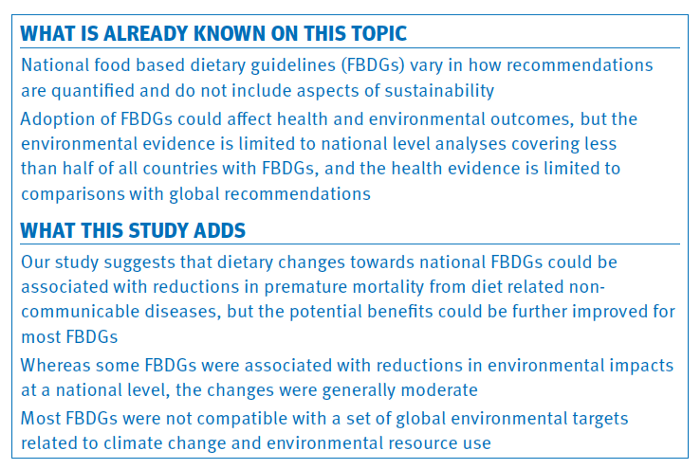