How does diet and lifestyle drive chronic disease? 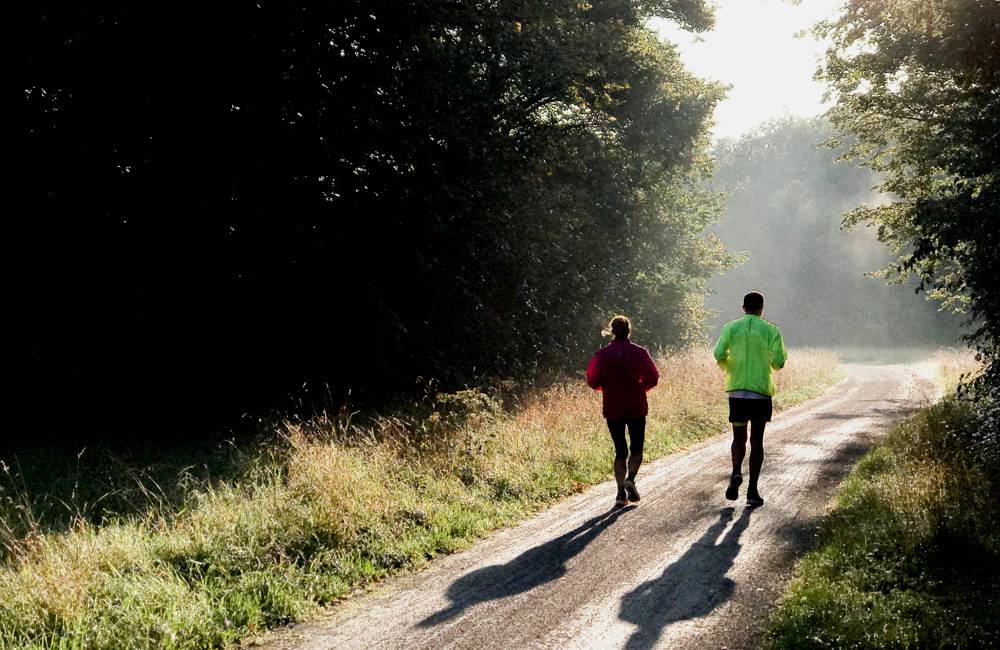 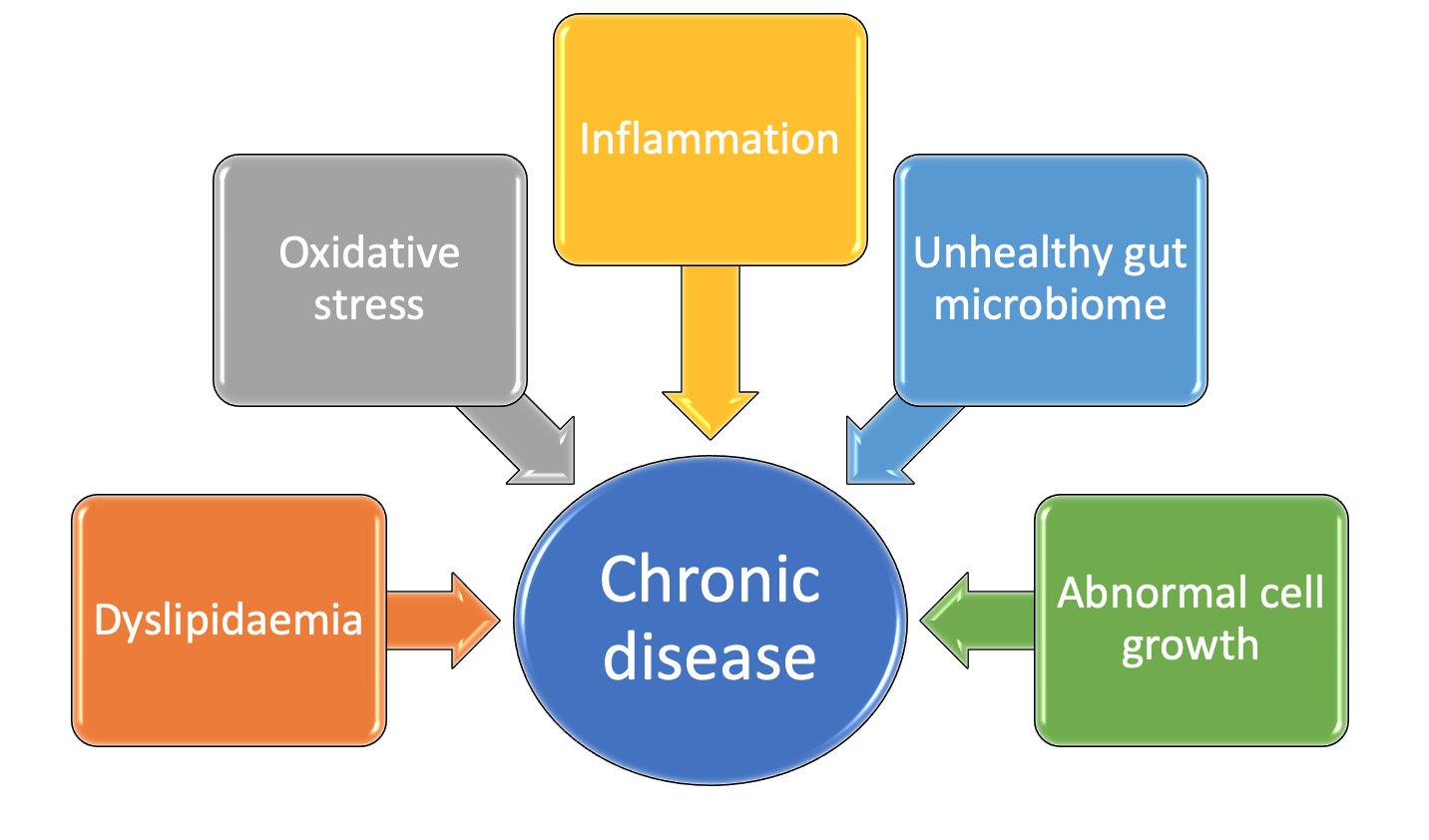 Oxidation is a normal process which takes place in the body and refers to a loss of electrons by a molecule, atom or ion. The opposite reaction is called reduction, which is the gain of an electron. These processes are usually in balance and play a crucial role in normal cellular metabolism. An imbalance between oxidation and reduction can give rise to the formation of reactive oxygen species (ROS). ROS are also the byproduct of normal cellular metabolism, however, during times of ‘stress’, ROS levels can rise dramatically resulting in tissue damage through oxidative stress. Oxidative stress can damage proteins, DNA and cell membranes. Stressors that can lead to increased levels of ROS include cigarette smoking, medication, pesticides, radiation and also our diet choices. The body requires antioxidants to counter the effects of these damaging ROS. Studies consistently show that those eating a predominately plant-based diets have higher levels of antioxidants in the body compared to omnivores. Plant foods contain hundreds of antioxidant compounds and have vastly higher antioxidant content than animal-derived foods. Some compounds within animal-derived foods, such as haem iron (found in haemoglobin and myoglobin in meat) are pro-oxidants, creating oxidative stress and contributing to cellular damage.

Advanced glycation end products (AGEs) are a group of compounds that induce oxidative stress. They are formed by a spontaneous chemical reaction between an amino acid (protein) and a monosaccharide (glucose). Some AGEs are produced in the body every day. However, diet is the biggest contributor to AGE formation (along with tobacco products). AGEs from food are generated more readily from protein-rich foods, when cooking at high temperatures, for longer and with dry heat cooking (lower AGE formation when there is water/moisture present). Foods that generate the most AGEs are fried and processed foods and also animal-derived foods — meat, dairy, fried eggs. Plant foods such as fruits, vegetables, whole grains and legumes, generate the least amount of AGEs. AGE formation is also increased by altered glucose metabolism — i.e. when there is high blood sugar, insulin resistance and in the presence of diabetes. AGEs accumulate over time and the process for detoxification by the body is slow. AGEs have been shown to result in inflammation, oxidative stress, cellular damage and insulin resistance and have been implicated in the pathogenesis of a number of chronic diseases, including type 2 diabetes, kidney failure, dementia, cancer and atherosclerosis. Figure 2 shows the numerous effects of AGEs in the body and their contribution to chronic disease and aging.

Figure 2. The effect of AGEs on various organs and the contribution to chronic disease and aging. 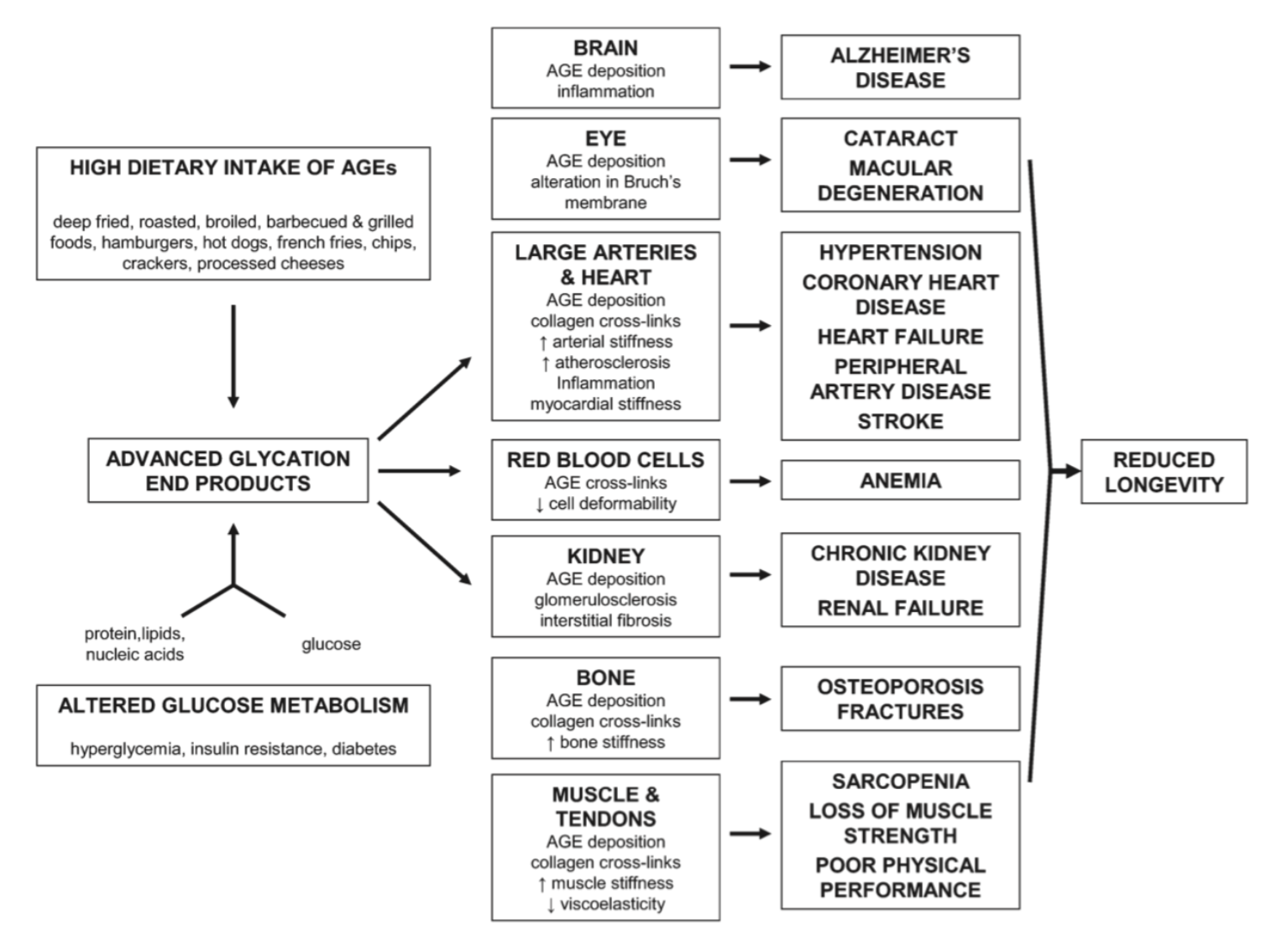 This term refers to the adverse changes within the gut microbiome (the trillions of organisms that live in the gut). We understand most about the bacteria within our gut, but there are also viruses, fungi and protozoa present too. Dietary choices impact the health of the gut bacteria, which rely predominately on fibre derived from whole plant foods. Plant-based diets increase bacterial diversity and promote the generation of short chain fatty acids (SCFA), such as butyrate, propionate and acetate. These SCFA are signalling molecules that are required for the integrity of the gut lining, maintaining the guts immune system, reducing colonic pH and protecting against pathogens. Diets that are lacking in plant-derived fibre, which is the case for most Western-style diet patterns, are known to result in reduced production of SCFA and increased production of secondary bile acids (formed by the action of gut bacteria on primary bile acids, which are produced by the liver). Secondary bile acids can damage the gut cells, increase gut permeability and are implicated in the development of cancers of the gastrointestinal tract. Diets high in saturated fat also increase the permeability of the gut lining and allow inflammatory substances, such as bacteria and lipopolysaccharides (bacterial endotoxins), into the circulation, which contributes to inflammation. An unhealthy gut microbiome will result in lower levels of incretin hormones, a group of gut hormones that are released after eating and decrease blood glucose levels, thus promoting the effects of insulin. In people with type 2 diabetes, this incretin effect is reduced or absent.

An unhealthy diet, high in saturated fat and processed foods results in accumulation of fat. This fat is mainly noticed in subcutaneous tissues as people put on weight, but it is the fat that is deposited in the organs, visceral fat, that is most harmful to health. Fat can accumulate in the cells of the muscle, liver, heart and pancreas causing these organs to become dysfunctional and resulting in metabolic diseases. Fat accumulation in muscle and liver cells leads to insulin resistance and type 2 diabetes. Fat accumulation can also damage cells and tissue resulting in cell death, for example in the pancreas, which will then not be able to produce enough insulin. Fat within cells causes mitochondrial dysfunction. Mitochondria are the powerhouse of the cells and dysfunction of these organelles have been associated with a number of chronic diseases. Accumulation of fat and being overweight puts the body in a continuous state of chronic inflammation as the fat tissue generates inflammatory proteins and growth factors, such as oestrogen and insulin-like growth factor. This in turn contributes to chronic disease, including cancers, which are stimulated to grow by the release of these growth hormones. It is worth noting, that you do not have to be overweight or have excess subcutaneous fat to have excess visceral fat. This is why people of normal weight can also develop type 2 diabetes if exposed to a Western-style diet pattern.

Protein has become a rather revered macronutrient. However, more is not necessarily better, and the source and quality of protein is more important than the quantity. Studies clearly show that higher intake of protein from animal sources, but not plant sources, is associated with an increased risk of mortality, cardiovascular disease and cancer. This has been shown in the Nurses’ Health Study and the Health Professionals follow-up study, the Adventist Health Study and a from a large prospective cohort study conducted in Japan. In substitution analyses, these studies demonstrate that even replacing 3% of total energy in the diet from animal protein with plant-derived protein can significantly reduce mortality from a number of causes with a risk reduction in the order of 20–40%.

There are a number of reasons why animal protein is a less healthy choice. These include, its packaging with cholesterol and saturated fat. Higher content of sulphur-containing and branch-chain amino acids when compared to plant-derived protein — both linked with a higher risk of chronic disease. Animal protein also increases the level of the growth hormone IGF-1, which is a driver of cancer growth.

Oxidative stress, gut dysbiosis and lipotoxicity all lead to inflammation, which then gives rise to chronic disease. A diet composed of whole plant foods has been termed an anti-inflammatory diet. Vegetarians are vegans have lower levels of inflammatory markers in the blood, less evidence of oxidative stress, healthier gut microbiome with higher levels of SCFA and reduced gut permeability and are less likely to be overweight/obese or accumulate fat within the cells of tissue. Plant-based diets thus prevent and reverse the main mechanisms of chronic disease as shown in Figure 3.

Figure 3. The mechanisms by which a plant-based diet can prevent and treat chronic disease 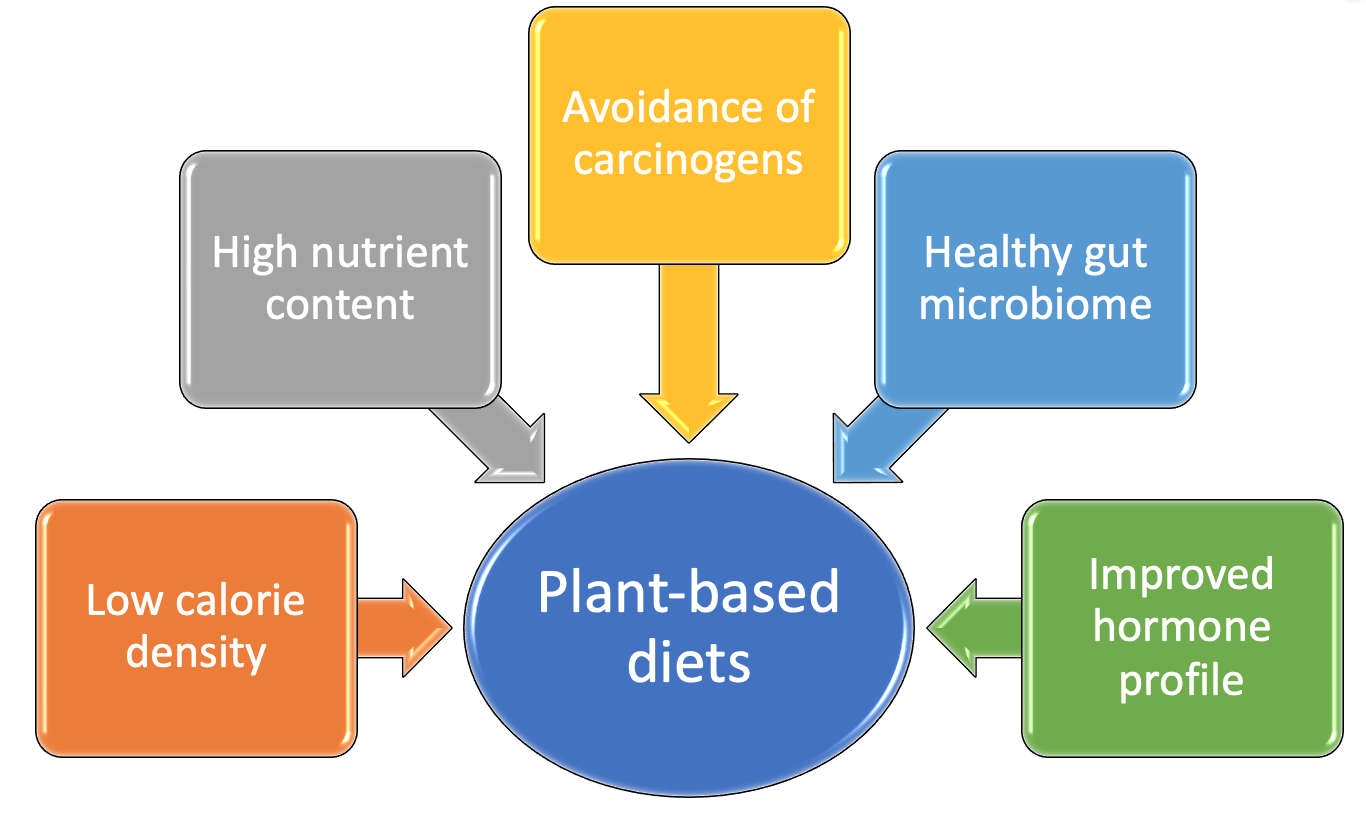