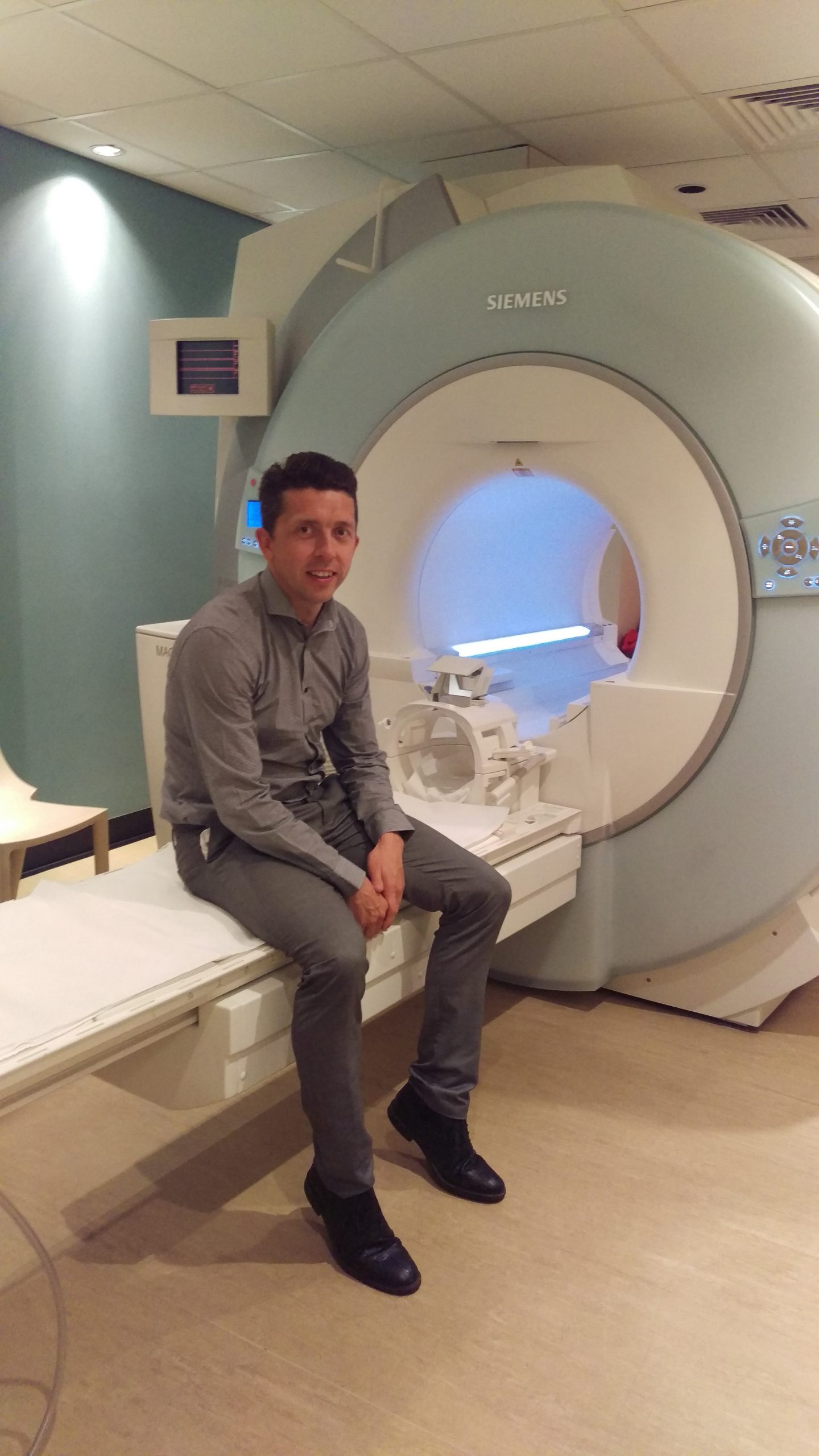 A story of debilitating multiple sclerosis to an Ironman trialthete using a whole food plant-based diet.

When my arm went numb on holiday in Mauritius in 2006, it was terrifying. Nothing like that had ever happened to me before, and because I was so far away from home, that definitely added to the anxiety.

The following twelve months weren’t much better as, although I wasn’t diagnosed with any condition, I was very unwell, and made numerous trips to see my GP, neurologist and the hospital. I knew there was something badly wrong with me, but like all of these things, and I know this now, it often takes time to diagnose people who are suffering from multiple sclerosis (MS). It was a tremendously difficult period in my life.

After my diagnosis, I was initally prescribed Rebif (interferon beta-1a). This made me very sick and within 6 months I was switched to Copaxone (glatiramer acetate). Both of these injectable medications act to alter the immune system to try and prevent further neurological damage. I had also been on several courses of steroids and other forms of medication. My symptoms at that time where quite debilitating and included severe problems with balance problems, pressure in my head, throat issues, Lhermitte’s pain (uncomfortable ‘electrical’ sensations) in my legs and chest, and general nerve pain. My mental health was also badly deteriorating in this period. Simple tasks like walking became a struggle from fear of falling.

Around 2010 I made a conscious decision to start fighting back, and to try and get my health back. It was through this approach and determination, that I came across a number of resources that suggested if I really wanted to facilitate the recovery process, I would have to change my lifestyle. In 2013, I also came across a Neurologist who was suffering badly with MS. It was very interesting, as she was on all kinds of drugs and still deteriorating. It was only when she changed her diet to food sources that were complimentary to brain health and stop conventional drugs did her health begin to improve.

Dr Terry Wahls is now one of the leading lights in the MS community, both from a patient perspective, but also from a medical doctor’s point of view, as she is conducting her own research into MS and the role nutrition can play in recovery from MS.

Over the years I’ve read hundreds of books, listened to tons of podcasts, and now follow many doctors who all advocate a whole food plant-based (WFPB) diet to obtain optimal health.

I’d worked out that I was going to be on medication for 50 years if I stuck to the medical advice. This is assuming I live to say 75 years old. But in April 2016 I was strong enough to make the decision to go off conventional medication for good (after 9 years of injecting every night) and start on a 100% WFPB diet, combined with daily exercise. Thankfully, 2 and a half years in, my health is great, and I feel stronger every day.

My own view is that there is a complete disconnect between advice people are getting from the medical profession and what actually works to help patients who are fighting MS. The entire discussion is dominated by conventional medicine which I now find quite sad. The reality is that medicine is designed to manage disease NOT induce health. We achieve optimal health through food and lifestyle and this now really needs to take a central role in patient pathways, facilitating a route back to health and fulfilment. People need to understand that they need to take ownership of their illness, try and put in place the building blocks that will facilitate the recovery process in their own bodies. For the most part this will be achieved through lifestyle changes.

I have met quite a few people in the medical profession over the years and I can say that every person I have met is very passionate about their job and want to help people. The problem is not with the medical professionals by and large, the issue is that they are all trained in the conventional manner and therefore do not advocate for the most part, the lifestyle approach to managing disease. This trend is now changing but only really in the USA. However, it gives me great hope to start seeing plant-based doctors and medical professionals beginning to raise their voices in the UK and Ireland. This is a very positive step forward, and it would be fair to say that with the popularity of veganism and the number of films being distributed on Netflix, there is change in the air, which can only be a positive thing for people’s health.

My kids are young (5 & 8 years old) and I am hugely aware of how important the environment kids grow up in is and how this environment may affect them in later life. It is generally accepted that the environment children keep from an early age, will have a direct impact on them when they get into their teens and beyond. So in our house we are all plant-based and have embraced the lifestyle. The interesting observation I would make is that the kids have taken very easily to this, and the transition has been fairly straight forward. We shop together, and we talk a lot about the food we eat, why we eat what we do, and why we don’t eat meat and dairy products. I have been pleasantly surprised at how interested the kids have been in this. After a few months it becomes very normal and the children have embraced this lifestyle and way of fuelling, which is fantastic. I truly believe that in years to come, this might be the best thing I have given the kids, as I am very aware how the food we are all eating is making people very sick. I feel I have given them a really great start in life with this approach.

When I look back over the last twelve years I am quite philosophical about it all now. I was coasting through life to 28 years old, then all of a sudden, I get sick, become very ill, and am diagnosed with a very serious condition. This gives you huge perspective and you very quickly realise what is really important in life. Personal development has played a key role in how I lead my life now. I invest in myself every day, reading books, watching documentaries, following people on line who add value to me, and I obviously exercise every day and eat great food. I think in life all anyone can do is their best. I know that although I still have some symptoms, I am giving my body every chance to repair and recover. I am a very ambitious person, and at 41 years old, 12 years into a MS diagnosis, I am hugely excited about the future and what it holds for me.

I want to continue to challenge the status quo; the idea that just because you might have a diagnosis, that your life is in some way over. That’s a load of nonsense. If you want to take anything from my story, surely I demonstrate that with the right approach to life, a plan and also by taking massive action, absolutely everything is possible. I was told in 2010 that people with MS can’t run marathons — I have completed 10 marathons so far. I was told a triathlon isn’t really an advisable activity for people living with MS — I have competed in quite a few triathlons now. In 2015, I hadn’t come across anyone in the world living with MS who had completed an Ironman and was told it was impossible, can’t be done. I have completed 7 Ironman triathlons in the last 36 months. 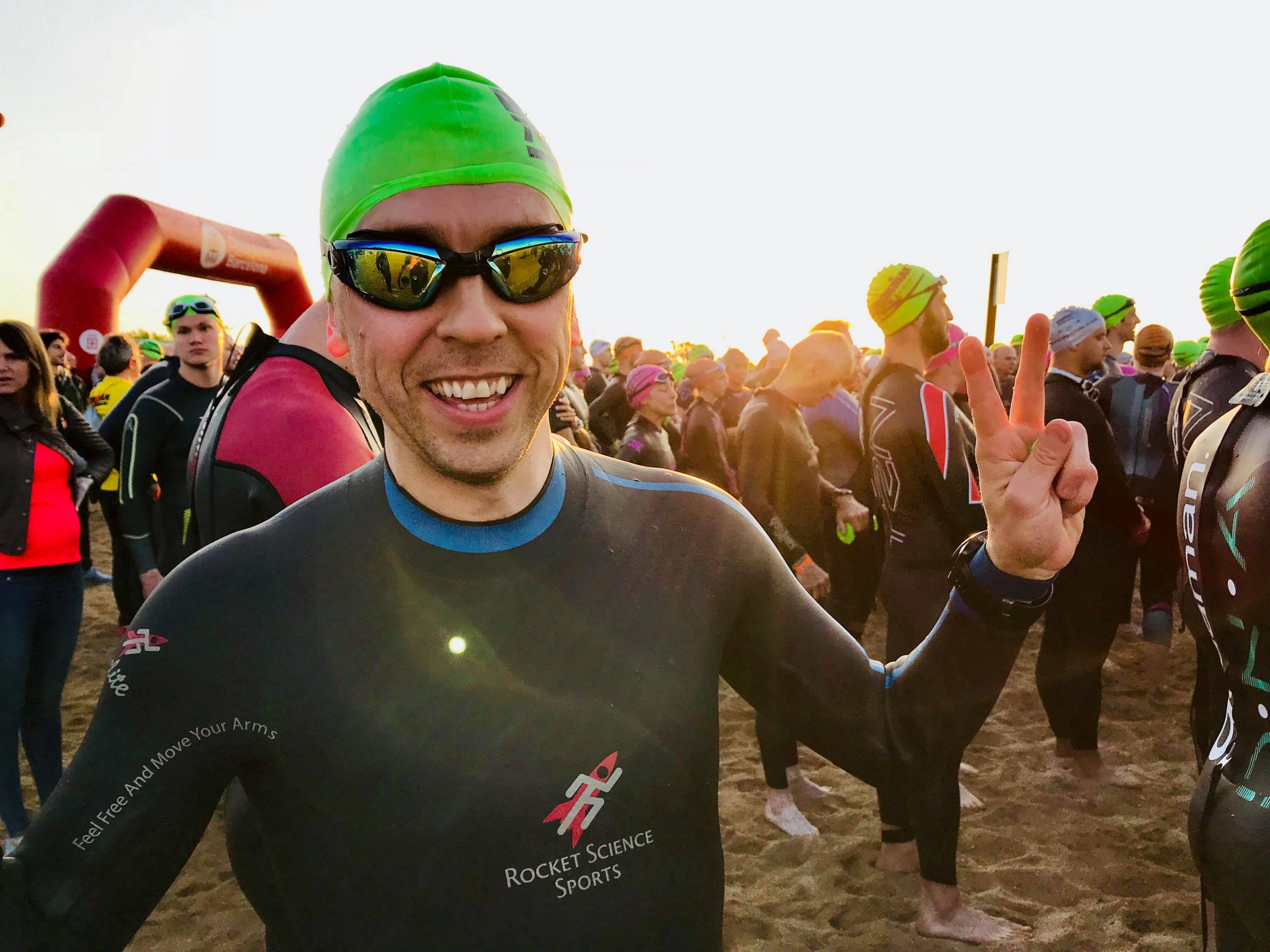 My view is this — Don’t ever let anyone in life tell you ‘you can’t do something’!

If you are diagnosed with an illness, the only way forward is for YOU to become a student of the condition. DO NOT depend on your doctors to cure you, or fix you, do not depend on friends and family to help or fix you, as this simply won’t happen.

What really hit home with me was, whenever I realised that if I was going to get back to any form of health, the only person who could facilitate that was MYSELF.

Read books, get on line, be curious, speak to all kinds of medical people, keep an open mind, find other people who are doing well and inspire you, and then take massive action.

This is a complex area, but there is now enough information on line and everywhere really, so I genuinely believe there is no better time to be sick (if that makes sense!). There is so much information and help out there that should give you a chance to get back on track and return to some form of health.