Plant-based in the community

Made in Hackney is the UK’s first plant-based community cookery school and charity https://madeinhackney.org/

DONATE NOW to Made in Hackney’s brand new crowdfunder to support their Community Meal Service to provide plant-based meals to households in Hackney who need support with food
https://www.crowdfunder.co.uk/noonegoeshungry2022

What will I learn from this webinar? 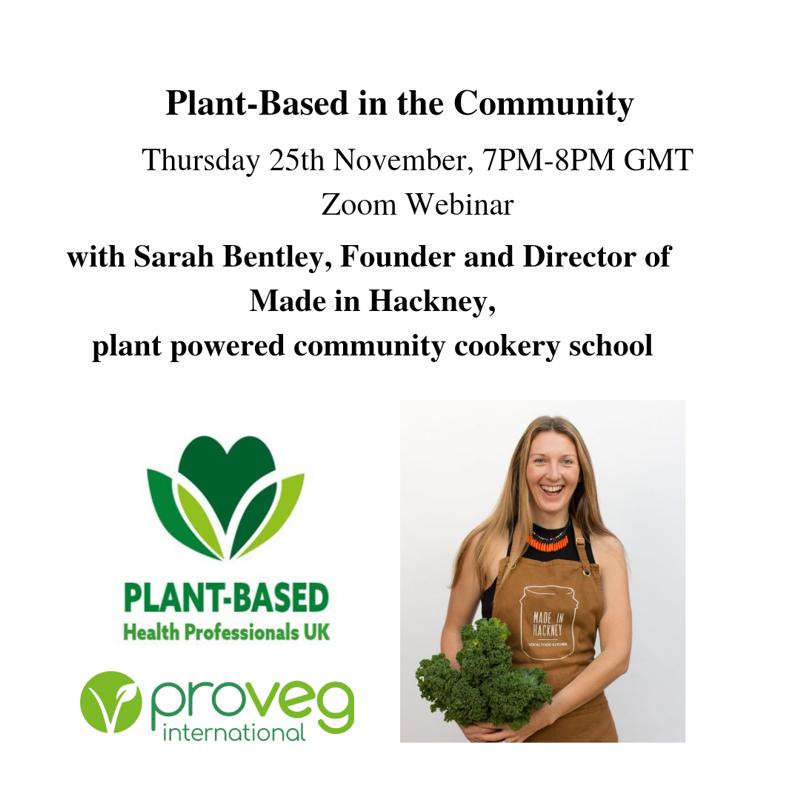 About Sarah Bentley, Founder and Director of Made in Hackney ​

In 2009, former reggae journalist and university lecturer Sarah Bentley had a conscious awakening. Questioning the impact her writing was having on the issues she cared about she embarked on a period of learning. She read books on the global food system; watched documentaries about the banking crisis; helped build cob houses in eco
communities; learned to grow food; became a passionate advocate of organic; started writing for The Ecologist; took multiple Permaculture courses; did an apprenticeship at 38 Degrees; took part in grassroots environmental activism (well, tagged along with ‘real’ activists to blockade an oil rig for the day); became a growing apprentice at
Growing Communities and had a life-changing conversation with Indian activist Vandana Shiva.

These experiences landed Sarah at the heart of London’s thriving organic, local food scene. Sarah believes this is, as the permaculture saying goes, ‘A revolution disguised as gardening.’ “By working on re-localising food systems you’re having a positive impact on a huge range of issues – food poverty, inequality, climate change, reducing corporate control of our food, health, and wellbeing.

This webinar lasts one hour including a Live Q&A.

We are supported by ProVeg and Veganfitness.com