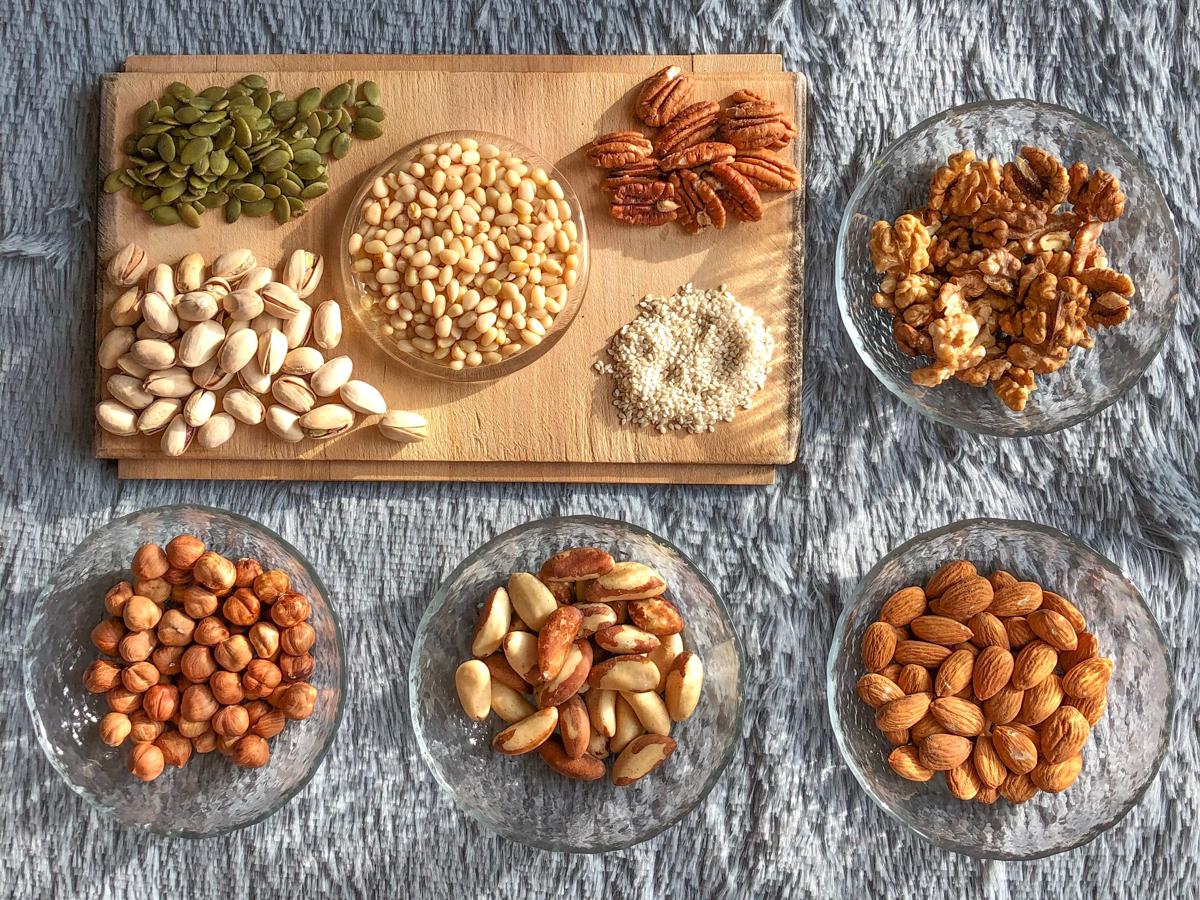 The Health Benefits of Nuts and Seeds

Nuts and seeds are often a fundamental part of a plant-based diet, typically incorporated as a non-animal source of protein and unsaturated fats. In addition to this, they are a great way of increasing fibre intake, which is associated with decreased incidence and mortality of chronic disease (1). There is growing evidence for the beneficial and protective effects of many other components of nuts and seeds including vitamins, minerals, antioxidants and polyphenols. Studies have demonstrated that eating a handful of nuts at least 5 days a week can increase lifespan by 2 years (2) and that not eating enough nuts and seeds is one of the leading dietary risk factors for disease burden globally (3). This article will first explore some of the beneficial components of nuts and seeds before looking at some evidence of nut and seed consumption on health.

Nuts and seeds contain a variety of essential minerals important for maintaining good health; some examples are listed below.

Selenium is a mineral found in high levels in brazil nuts and sunflower seeds that is also an example of an antioxidant. Antioxidants fight oxidative stress (tissue damage caused by too many free radicals) therefore defending the body from inflammation and chronic disease. High levels of selenium are associated with a lower risk of cardiovascular disease (7, 8) and some cancers including breast, lung, colon and prostate (9). Alzheimer’s patients have been found to have abnormally low plasma selenium (10), providing the possibility that increasing dietary intake may be able to improve memory in this population (11). Selenium is also protective against thyroid conditions, boots the immune system and reduces asthma symptoms (12, 13).

Vitamin E is another potent antioxidant which is protective against diseases including cardiovascular diseases, cancer and Alzheimer’s disease (14). It protects and maintains cell membrane integrity, reduces platelet aggregation and stimulates and enhances the immune response (14).

The B vitamins are a group of 8 vitamins essential for good health, many of which are commonly found in nuts and seeds. Thiamine (B1) deficiency can lead to congestive heart failure and supplementation has shown to significantly improve heart function in these patients compared to placebo (15). Riboflavin (B2) is protective against oxidative stress and inflammation of nerves which can contribute to migraines; supplementation has shown to decrease migraine frequency by two headaches per month compared to placebo (16). Niacin (B3) has been demonstrated to increase HDL and lower levels of LDL and triglycerides, improving dyslipidaemia – which is a major risk factor for cardiovascular disease (4). High dietary pyridoxine (B6) intake is linked with a decreased overall cancer risk (particularly gastrointestinal cancers) (17) and deficiency is associated with inflammation, decreased immunity and microcytic anaemia (4).

Folate (B9) is involved in DNA and RNA formation, protein metabolism and red blood cell production and during pregnancy, deficiency can lead to neural tube defects in the foetus (4). Folate has been suggested to reduce stroke risk, and stroke rates in the U.S. and Canada fell rapidly after the introduction of mandatory folic acid fortification to bread, compared to the U.K. which doesn’t require fortification and saw no change (18). Additionally, those who have a higher-than-average dietary intake of folate for at least 15 years have a significantly decreased risk of colon and breast cancer (19, 20) and high serum folate is associated with a decreased overall cancer incidence (21). Some studies have also found a link between low serum folate and increased risk of dementia (4).

Homocysteine is an amino acid which is detrimental to health when present in high amounts. It can contribute to the development of atherosclerosis and high levels are associated with increased risk of cardiovascular disease and stroke (22). There has also been an observational relationship between high homocysteine and increased incidence of Alzheimer’s disease and dementia (23). Vitamins B2, B6 and B12 play key roles in the conversion of homocysteine to methionine and people with high dietary intakes of these vitamins have a lower risk of cardiovascular disease, stroke and hypertension (4).

In nuts, seeds, legumes and grains phosphorus can be stored as phytate (phytic acid) – a substance that when incorporated into the diet can protect against DNA damage and cancer cell growth by detoxifying excess iron, preventing the form of hydroxyl radicals (24). Phytates have been shown to slow the growth of, and possibly be protective against colorectal cancer and osteoporosis (24).

Flavonoids are a type of polyphenol with a range of antioxidant, anti-inflammatory, anti-platelet, anti-mutagenic and anti-carcinogenic properties. Consumption may contribute to the prevention of diabetes and cardiovascular disease through beneficial effects on blood lipids, blood pressure, plasma glucose and atherosclerotic plaque stabilisation (25). It has been shown to be protective against some cancers, Alzheimer’s disease, Parkinson’s disease, viral infections, cataracts, erectile dysfunction and irritable bowel syndrome (25).

Lignans are plant compounds with a chemical structure similar to that of steroid-hormones, thus sometimes referred to as phytoestrogens. In vitro, lignans directly inhibit breast cancer cell proliferation (26). They have been associated with a reduced risk of heart disease, menopausal symptoms, osteoporosis and breast cancer (27, 28).

Omega-6 fatty acid exists in excess in the Western diet due to processed food consumption; this elevates the omega-6/omega-3 ratio and is associated with inflammation and increased risk of chronic disease. Increasing the levels of omega-3 fatty acids (thus decreasing the ratio) has proven effective at protecting against arrhythmias, atherosclerosis, inflammation and thrombosis as well as improving endothelial function, lowering blood pressure and free triglycerides (30). Adequate omega-3 fatty acid consumption results in lower incidence of hypertension, cardiovascular disease and all-cause mortality, as well as has protective effects on brain function in older adults. Sufficient consumption of omega-3 fatty acids is able to slow the progression of Alzheimer’s disease and dementia, correlates with a larger brain volume and may improve mood disorders such as depression (31, 32, 33).

Table 1: Examples of nuts and seeds with high content of the discussed compounds. This is not an exhaustive list – all nuts and seeds will contain differing compositions of these substances.

Nut consumption has been associated with a reduced risk of cardiovascular disease (34, 35, 36). Additionally, studies have suggested that regular consumption of nuts and seeds improve blood pressure, cholesterol, blood flow and epithelial function. For example, a prospective, double-blind, placebo-controlled randomised trial studying the effects of 2 tablespoons of ground flaxseed per day for 6 months (baked into muffins and other foods) found that the hypertensive participants in the flaxseed group dropped on average 15 points in systolic blood pressure and 7 points in diastolic pressure (37). The blood pressure of the hypertensive participants in the placebo group did not significantly change. A systematic review of randomised intervention trials investigating the effects of nuts on blood lipids supported reduction of total cholesterol, LDL cholesterol, apoplipoprotein B and triglycerides by nut consumption (38). Astonishingly, a study comparing the effects of brazil nut consumption after a single meal found that eating 4 or more brazil nuts improved post-prandial cholesterol levels compared to participants who ate none (39). One example of a study demonstrating improvements in blood flow found that eating 3-4 handfuls of pistachios every day for 3 weeks significantly improved penile blood flow (resulting in firmer erections), erectile function parameters and blood lipid profiles in patients with erectile dysfunction (40). Additionally, nuts and seeds are frequently rich in iron.

Nut and seed consumption is associated with decreased risk of and mortality from many types of cancer. Risk of pancreatic cancer in women eating nuts at least twice per week is reduced by 32% compared to women who rarely eat nuts (41). Women at high risk of breast cancer who ate two teaspoons of ground flaxseeds every day for a year had fewer precancerous changes in their breasts compared to before they started and the vast majority had a decrease in levels of a biomarker of proliferation (42). Other studies have indicated inverse correlations between nut consumption and colorectal cancer, stomach cancer and lung cancer (43).

Table 2: A summary of the health benefits of some nuts, as evidenced by studies review by Machado de Souza et al. (2017)

There is a growing evidence base for the benefits of eating nuts and seeds for bone health, cardiovascular health, brain health, reducing cancer risk and possibly in other conditions such as obesity, diabetes and asthma. Nuts and seeds are packed with macro- and micro-nutrients that are beneficial to health and one can confidently be advised to regularly consume them to promote health and reduce risk of developing chronic disease. A handful can be eaten as a snack, or you can sprinkle them on top of soups, salads, stir-fries, oatmeal and cereal. They can be blended into smoothies or you can use nut butters and spreads to top off a snack (e.g. almond butter on toast, peanut butter and apple). They can be used as meat replacement in a meal (e.g. nut loaf) or to make nut pesto’s and salad dressings. Additionally, they can be baked into breads or nut flours can be used in baking for an extra health boost.