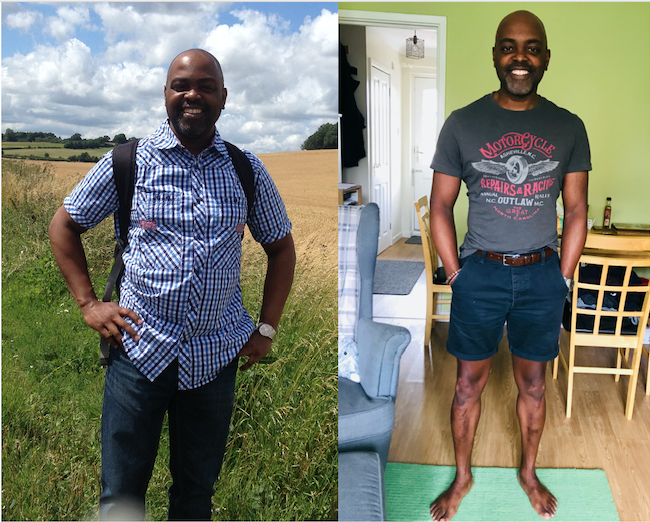 Six years ago I was a pretty average dad who ate a typical Western-style diet, including meat, dairy and beer, with cheese being my particular weakness. My job as a site manager in construction gave me some daily exercise along with weekend walks in the countryside with my family, but I was well aware that I was overweight.

Having reached 40 years old, I took up my local GP surgery’s offer to have a health check. After weighing me and taking my blood pressure, my GP informed me that my blood pressure was elevated and arranged for me to have blood tests. When the blood test results came back my GP told me my cholesterol level was raised and he was also concerned that I might have a fatty liver. Although I wasn’t in the best shape, this news shocked me and I wondered if I was in danger of having a heart attack. My GP asked me if I drank a lot of alcohol or ate a lot of meat and dairy. I told him I ate what I thought was a relatively ‘normal’ diet both in volume and content but was surprised to be told that this wasn’t the case. He suggested that I cut down on red meat and alcohol and take up regular exercise, and he would see me in six months time for another check-up.

Following this consultation, it was my partner who suggested we should all try a vegetarian diet as she had eaten this way from the age of 15 to 30 years. I must say I was not convinced by this and even thought I would be hungry if meat wasn’t included in my meals, but I thought I would give it a go. I found the transition strange at first, but after a month I didn’t miss eating meat at all.

I am 5ft 5inches tall, black and now 46 years old. Both my parents are from the West Indies. My mother who is 76, takes Candesartan for hypertension and has done so for some time. My father, who is 72, takes Apixiban and Bisoprolol for an irregular heart beat. He is currently undergoing tests for high blood pressure and the irregular heart beat. Neither one of my parents are particularly overweight, they have never smoked or drunk too much alcohol. This is relevant because my brother, who is 40 years old, has also been told by his doctor that he has high blood pressure. This can’t be a mere coincidence.

My friends first found out that I had transitioned to a vegetarain diet when I attended a 40th birthday party where I had to ask if there were any vegetarian options in the buffet. When my best friend heard this he announced it to the whole party, which was an odd moment to say the least. This was a rude introduction into the world of plant-based eating and the feeling of being almost like a ‘leper’. Many questions were asked by others at the party and I explained as simply as I could that I was doing this initially for my health and that there were plenty of meat alternatives available if they also wanted to give it a go. Most people said they were interested but couldn’t imagine not eating meat because they’d done it all their lives. It just seemed like conditioning to me and it was something I hadn’t been aware of myself before then.

Having been vegetarian for 4 years, it was watching the movie ‘What The Health’ that made my family and me decide to become vegan. The movie really explained why a plant-based diet and exercise are the most effective way of sustaining a healthy body throughout your lifetime. I don’t think healthcare professionals put enough emphasis on these lifestyle factors.

From being 12 stone at 40 years old, I am now 9 stone 10 pounds, losing the in weight with very little effort. I no longer have high blood pressure or cholesterol, confirmed at all my subsequent check-ups with my GP. I am sure this would not be the case had I not become plant-based. I must add, I’m still trying to convince my mum, dad, brother and friends to do the same.

During the current pandemic I put on 7lbs, despite not appearing to eat much more than I usually did. This forced me to look at what processed vegan food my family and I were eating. After some searching I bought the book ‘How Not To Diet’ by Dr Michael Greger, and my family began eating as close to a whole food plant-based diet as possible. This coupled with the exercise helped me to lose the 7lbs by the time I went back to work two months later.

I have to thank my GP for assessing my health, to my beautiful partner who initially opened my eyes to meat-free living and the vegan community for giving me the knowledge and confidence to complete my journey to plant- based healthy living.