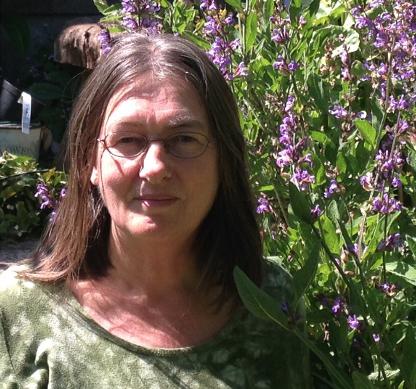 I was brought up by my grandparents, theosophists, who were ‘on/off’ vegetarians, probably because the desire was there but the knowledge and availability of vegetarian foods and recipes was less known. I was vegetarian as a young adult, and one day heard a throw away comment from a journalist talking about live calf exports in the farming industry, saying ‘these by-products of the dairy industry’. This shocked me and confirmed what had been in the back of my mind for a while, that at heart I wanted to be vegan.

Initially I struggled and could only think about what I was giving up. I tried soya milk and hated it, it curdled in my coffee, and there were no cheese- style substitutes. I was familiar with a couple of commercial products such as Sosolatas by either Granose or Granovita, nutty sausage style tinned products, and various nut roasts. We ate nut roasts at home, but that was about it as far as vegetarian or vegan ready-made foods were concerned. There were a couple of dairy-free margarine butter alternatives, from independent health shops. Puddings and cakes were mainly unsuitable, although I do recall a couple of flapjacks being ok. It was a case of very quickly learning to cook and bake my own food or go without.

I soon decided I was approaching this the wrong way, I should research and learn about what lovely foods I COULD have, rather than thinking of those I’d lost. I was just over 30 years old and I’ve never looked back. I found that different brands of soya milk, and plant milks can taste very different. I did give up coffee due to the curdling, and mainly drink tea. Eating out was difficult and always best booked ahead, with the awkward vegan being offered a huge plate of green leaves and tomatoes, cucumber and radically maybe some grapes!! Or maybe a dry jacket potato. Pudding would be fruit, plain and simple. Unless you could persuade your friends to go to an Indian or Chinese restaurant, when there would usually be vegetable stir fries or curries, much better! (This is Devon I’m talking about!). Today of course you can get lovely plant-based options almost anywhere. I’ve tried a few vegan ready meals and products, but I much prefer home-made whole food meals. When eating out I usually opt for simple things like hummus, vegetable curry or stir fries. I recall an office Christmas dinner at a pub where I was given a plate of boiled vegetables (despite pre booking) and was told the gravy wasn’t suitable, nor were the potatoes as they were cooked with the meat. Thank goodness that’s no longer the case!

Regarding my health, before becoming vegan I used to have regular digestive problems, reflux, irritable bowel syndrome and painful heavy menstrual periods. All that vanished as if by magic after adopting a healthy vegan diet. In fact it was quite interesting that for a couple of years we kept rescue hens and I went back to eating eggs, and my periods became very painful again. When I stopped eating eggs I went back to pain-free, much lighter periods. I used to be a blood donor and over a few years of giving 21 pints of blood was never anaemic, and the nurses were always very surprised when I told them I was vegan. I only stopped because of the discovery of a congenital heart valve murmur at a general check-up, which gives me no problems or symptoms.

Many members of my family were initially worried about my health when I told them I was becoming vegan, and despite my research and reassurance that I was careful about nutrition, it was a good few years before they were happy with my decision. The most difficult thing, especially in the early days, was eating at other people’s houses, and I still today usually take my own food to avoid any difficulties. There was one time my friends invited us for dinner and served well boiled cauliflower and potatoes and nothing else! Education on plant-based diets is so important, and thank goodness it is becoming more well known. The comment I’ve never forgotten from a friend on hearing another friend ask me ‘what I ate’ interrupting with ‘yes, we know it’s all brown and tastes like cardboard’, is hopefully no longer believed. I seriously think she was mistaking that for a meat-based diet surely, that’s mainly brown! A plant-based diet is a riot of flavour, textures and colours of the rainbow.

I am 57 years old, with low to average blood pressure, a healthy body mass index, low cholesterol and pretty much perfect digestion. I see many people my age having to begin lifelong medication and feel very lucky to not be in the same position. I put this down to my lifelong healthy plant-based diet.