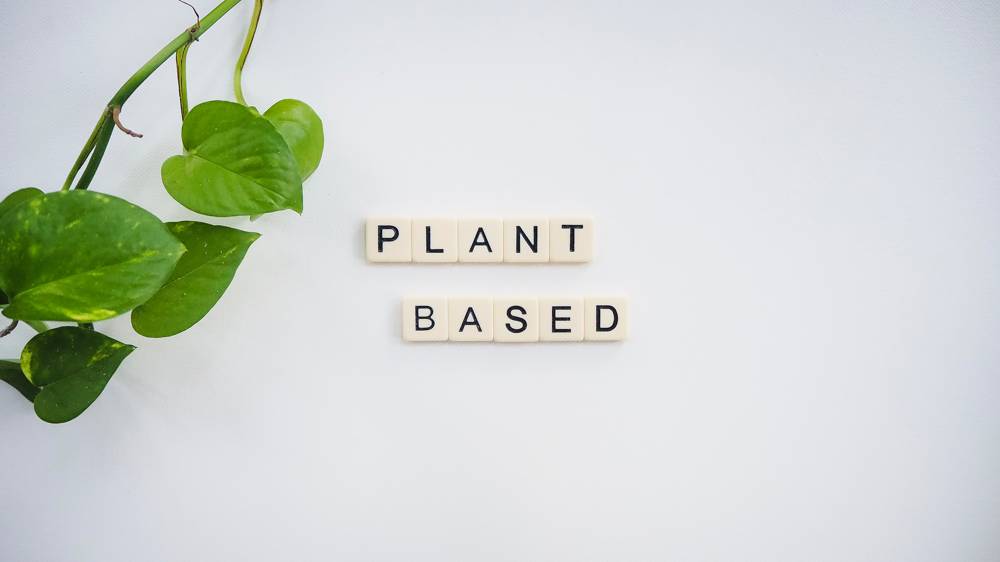 Overweight and obesity are at epidemic proportions and a major factor in the rise of non-communicable diseases, including cardiovascular disease, certain cancers, type 2 diabetes, chronic kidney disease and dementia. In the UK, 64% of adults are either overweight or obese and the prevelance amongst children continues to rise.

The use of BMI is not without issue and is often criticised as a flawed method of determining body fatness and hence health status. The reasons are as follows;

1) BMI cannot distinguish between fat mass and muscle mass (muscle is about 18% more dense than fat) and therefore fit, athletic, muscular people can be labelled as ‘overweight’ when using BMI. BMI also cannot take into account differences in bone mass.

2) BMI does not take into account where the fat is carried. We know that fat carried around the waist has more adverse consequences for health than fat carried elsewhere. It also does not give you a measure of visceral fat (fat deposited in the body organs, such as the liver and heart), which is the fat associated with adverse health consequences. You can have a healthy BMI yet have a lot of visceral fat and hence be falsely reassured.

3) BMI overestimates body fatness in Africans as they tend to have a higher amount of muscle mass and higher bone mineral density than other racial groups.

A better measure of body fat and associated risks of cardiovascular disease and type 2 diabetes is thought to be waist circumference and waist/hip ratio. Waist circumference is considered to be increased if the waist is ≥40 inches (102 centimetres) in men and ≥35 inches (88 centimetres) in women. A normal waist to hip ratio is considered to be ≤0.9 for man and ≤0.85 for women.

Regardless of the issues with defining abnormal body fatness, we know that the worldwide consequences of overweight and obesity are out of control.

The causes of overweight/obesity are numerous and multifactorial and the magnitude of the problem should not be underestimated. However, diet choices impact considerably and the Western-style diet pattern, high in processed foods, sugar-sweetened beverages and animal-derived foods, has a major role to play. Plant-based diets are a very effective way of maintaining a healthy weight and losing weight if you need to.

1) Reduced energy density: Plant foods are lower in calorie density, yet higher in nutritional content, compared with animal-derived foods. The fibre in plant foods improves satiety and prevents overconsumption. Most people eat the same volume of food everyday — around 4 pounds. So, on a plant-based diet you can generally eat to fullness without over-consuming calories. In addition, a whole food plant-based diet (WFPB) with no added oil is low in fat, with carbohydrate being the main macronutrient. Don’t forget that fat has 9 calories per gram but carbohydrates and protein only 4 calories per gram. Check out our factsheet on calorie density below. It should also be remembered that if you are a healthy weight and shift to a plant-based diet, you may need to eat a larger volume of food to maintain that weight. 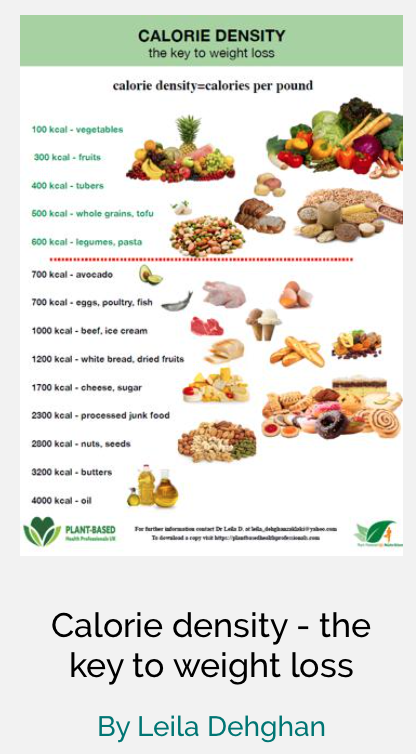 2) Increased fibre intake: The increased fibre consumption on a plant-based diet is more satiating, giving the feeling of fullness with less calorie intake, when compared to other diet patterns. Don’t forget that fibre does not provide calories and is only present in plant foods.

Gastrointestinal hormones are involved in regulation of glucose metabolism, energy regulation, satiety, and weight management. Consumption of food triggers secretion of incretin hormones from the gastrointestinal tract, namely glucagon-like peptide-1 (GLP-1) and gastric inhibitory peptide (GIP), which enhance insulin secretion and help maintain glucose control. The satiety hormones GLP-1, peptide YY (PYY), pancreatic polypeptide (PP) and amylin control appetite and energy regulation. The release of these satiety hormones can depend on meal composition and differs between states of normal and abnormal glucose control. A study conducted by the Physicians Committee for Responsible Medicine involved a randomised crossover design and examined the effects of two energy- and macronutrient-matched meals – a processed-meat and cheese meal and a vegan meal with tofu – on gastrointestinal appetite hormones and satiety in 20 men with type 2 diabetes, 20 obese men, and 20 healthy men. The results showed that the vegan meal led to a greater increase in the levels of gut satiety hormones, which led to greater satiety in the participants.

Prospective cohort studies, including the EPIC-Oxford study and the Adventist Health Studies confirm that the more a diet is centred around whole plant foods, the lower the rate of obesity. In most studies, vegans and those eating the most plant-derived foods have the lowest body weight compared to other diet patterns. Prospective cohort studies have shown that the more meat consumed in the diet the higher the risk of obesity. Healthy diet patterns such as the DASH and Mediterranean diets are associated with a more healthful weight.

A WFPB diet has been shown to be very effective for the treatment of overweight and obesity. Meta-analyses have demonstrated that vegetarian and vegan diets are highly effective for weight loss and may be more effective than non-vegetarian diets.

The PCRM conducted a randomised study of a WFPB diet versus the National Cholesterol Education Program recommended diet (control group). 64 overweight women were included. There was no calorie restriction, food was not provided, and exercise was not required. After 14 weeks, the mean weight loss in the WFPB diet group was 5.8kg, which was significantly greater than in the control group (weight loss 3.8kg). At 1 year and 2 years follow up, the WFPB diet group had maintained the weight loss, whereas the control group had regained the weight. In addition, the WFPB diets group showed improvements in glucose tolerance and insulin sensitivity.

The BROAD study was a randomised controlled trial using a low-fat WFPB diet in a community setting for obesity, ischaemic heart disease or diabetes. The intervention group was not required to restrict calories or undertake physical activity and was compared to a control group that continued their usual care. The intervention led to a significant and sustained reduction in weight and BMI at all time points when compared to the control group and out until the 12-month follow-up. This is notable, as it was a community intervention such that what people ate was not controlled in any way other than through upfront dietary education for the intervention group. The authors concluded that this study ‘achieved greater weight loss at 6 and 12 months than any other trial that does not limit energy intake or mandate regular exercise’.

There are continued debates within the scientific community as to whether a low-carbohydrate diet (however that may be defined) is more effective than a low-fat diet (again, most low-fat interventions don’t actually manage to reduce fat intake significantly). However, various meta-analyses have not shown this to be true if the diets are isocaloric (of equal calorie content). Different macronutrient combinations can lead to similar amounts of weight loss. However, there are long term adverse effects of a low carbohydrate diet, especially when carbohydrates are replaced by animal-derived foods. One such effect is that in 30% of people there is a rise in LDL-cholesterol levels on a low carbohydrate diet. In addition, low carbohydrate diets have been associated with an increased risk of cardiovascular disease, cancer and death. The ideal combination of macronutrients is less important than the quality of the foods being eaten, and weight loss is most successful and sustainable when limiting animal-derived and processed foods and emphasising minimally processed whole plant foods.

Another common theme in the scientific literature is that body weight and response to diets is dependent on genetic factors. This is also not true. Environmental factors always trump genetics when it comes to body weight. Both the low carbohydrate diet and genetic theory were put to the test in the DIETFITS study, which compared weight loss on a low-fat diet with a low-carbohydrate diet. After 12 months, there was no significant difference in weight change between a healthy low-fat diet versus a healthy low-carbohydrate diet. Thus, once again emphasising the importance of food quality rather than the individual macronutrients. In addition, this study examined different genes that had previously been suggested to affect response to fat and carbohydrate. However, these genes did not predict for weight loss or associate with the effectiveness of either diet pattern.

So, all in all, the scientific data are supportive of plant-based diets for maintaining a healthy weight with the added benefits of reducing the risk of chronic diseases such as cardiovascular disease, type 2 diabetes and some cancers.