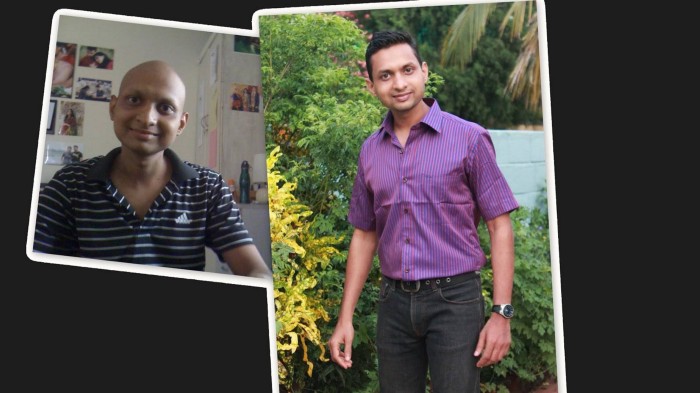 5 months into our marriage, dreadful news awaited us! After suffering with severe abdominal pain for two weeks, my husband was diagnosed with advanced stage testicular cancer. With this news, our dreams came crashing down and our hopes dwindled.The uncertainty scared us. I rushed to Dr. google for information and with much delight learnt that the prognosis for his type of cancer was generally good – what a relief! Thank you, Mr. Lance Armstrong, and the Armstrong Foundation for such hopeful information. I ran to Raghav, hugged him tight and said, “we’re in this together, and we’ll face it!”. There began a dreadful journey of orchidectomy, retroperitoneal lymph node dissection and chemotherapy.

We were vegans for nearly two years by then, however we knew little about the positive impacts of a whole food plant-based diet on health. My further research led me to this concept, so I started writing to top professionals in the field. Some of them kindly responded with their views about continuing with the chemotherapy and reassurances of the benefits of a whole food plant-based diet. I began reading the China Study, by T. Colin Campbell and with no second thought, we plunged into following a whole food plant-based diet. But, it wasn’t easy! One of the first pieces of advice we received from our oncology team was to follow a neutropenic diet i.e, avoiding raw fruits and vegetables, and to start giving him eggs and dairy for protein. Raghav and I were not ready to harm animals, and furthermore we were convinced there was no necessity to include high amounts of animal protein in the diet. But this was a difficult to convey to our families, especially at this time of emotional crisis. We tried to make it peaceful for everyone, and slowly talked them out of forcing us into it. I would sneakily give him fruits, coconut water and other natural foods. The next worst advice was to give him Tetra Pak juices that are loaded with sugar. We would secretly throw these juices away – what a lot of money wasted!

Fast forward to 4 months of the treatment. Despite the dreadful strain his body was put through, Raghav stayed positive and hopeful throughout. At this point he complained of neurological complications which were apparently a side-effect of the chemotherapy drugs. Every doctor that we visited only gave him new tablets to try, with little respite from the suffering. By this time, our confidence in the ability of plant-based diets had improved because, Raghav started recovering quickly despite the chemotherapy and difficult surgeries.

I had kept in touch with some family members of cancer patients from the ward where Raghav was admitted. Almost all of them kept complaining of the poor quality of life of their loved ones. However, in Raghav’s case his health started incrementally improving. I believe that this was due to his diet and some other lifestyle habits that we embraced like yoga, pranayama and acupressure. We cannot be more thankful that recently his 5-year comprehensive test reported that he was completely cancer-free. We owe it to the animals and the power of nature.