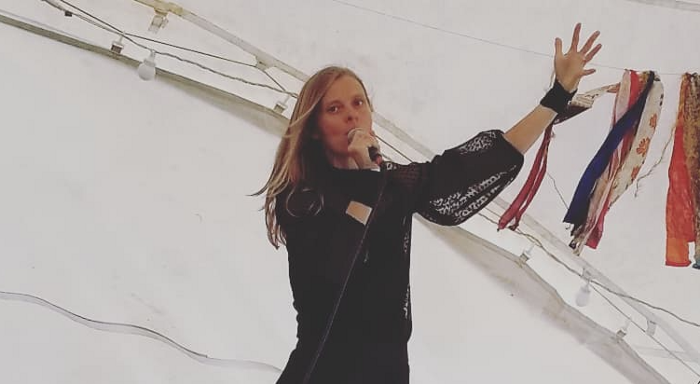 I’m Jackie, a performance poet and founder of the charity Without Wings, the Manx Autoimmune Arthritis Trust. Without Wings is a venture which seeks to raise awareness of autoimmune arthritis, and to provide useful information, compassionate help and counselling when people living with these diagnoses are most ‘without wings’ or their physical or emotional freedom. We are based on the Isle of Man

Before being struck with seronegative arthritis in May 2013, I wasn’t either of these things, and nor was I plant-based, though for ethical reasons, I have been vegetarian since I was eight years old. My experience of severe illness, the trauma, plus my journey back to wellness, has completely altered my life and who I am as a person. It is a great honour to be invited to share my story.

As with many people, I’ve always had niggling health problems. Since childhood, I had suffered with allergies. Then, in my early 20’s, I contracted glandular fever. The legacy of this was lethargy, a (largely ignored!) intolerance to alcohol, and daily bloating/food sensitivities.

None of this was helped by the birth of my first child in 2002, and the development of what I can only describe as clinical insomnia. Shortly after the birth of our third child in 2008, I developed hypothyroidism and tinnitus. This quickly spiralled into years of sleepless, anxiety and chronic fatigue disordered hell. I received no relief from this until I discovered the fantastic Linden Method for Complete Anxiety Recovery in June 2012.

The reason I mention all of this, is to set the framework for where I had been emotionally and physically in the lead-up to the diagnosis of arthritis. Of significant note, is the fact that since embarking on the gut healing, Paddison Program for Rheumatoid Arthritis — a strict, exercise and low fat, plant-based dietary regimen — all signs of bloating, lethargy and allergies have virtually vanished. In addition, my energy, productivity and creativity levels after nearly five years of eating this way, are astounding. As well as being a mother of three and the driving force behind the charity, I teach, am an active musician and poet, and one half of Penny Productions, a gothic inspired pop-up spoken word theatrical group. All this requires a level of stamina which, for the first time in my adult life, despite having an arthritis diagnosis, I now possess.

I experienced the first signs of arthritis in the Summer of 2013. Whilst training for an Adventure Race, I was running down a hill and my neck jerked and became stiff. By the time I reached the car, each footstep was excruciating, sending shattered glass-like pain throughout my neck. Over the course of the next few weeks, these symptoms spread to my jaw, hips, knees, and left elbow, locking it so painfully at a right angle that there was no position in which I could find any comfort. Then, on my daughter’s first day at school I sat in my friend’s garden and watched in horror as my knees and ankles began to swell and the illness literally exploded throughout my body. I did not participate in the Adventure Race!

Looking back, it is unbelievable to think, but it took 14 different doctors, osteopaths, acupuncturists and physiotherapists — each one seen more than once — plus visits to A&E, before I was taken seriously enough to be referred to a Rheumatologist, who I eventually saw privately in the December 2013. By this time the illness was in virtually every joint of my body, including the whole length of my spine. I could barely chew, dress or bathe myself, lift my feet more than a few inches, or even get a glass of water without extreme difficulty. Each night I would wake screaming because of the pain caused by the pressure of the bed, and my husband would have to turn me because I couldn’t do so myself.

It was declared at that first Rheumatology appointment, that I was one of the worst cases of inflammatory arthritis they had seen in years. After being administered a Kenalog (steroid) injection, I was sent away with oral steroids and a leaflet on Ankylosing Spondylitis. In January 2014 I was administered more oral steroids, another injection of Kenalog and began Sulfasalazine, shortly followed by the addition of Methotrexate. Both Sulphasalazine and Methotrexate are called DMARDs (disease-modifying antirheumatic drugs). They have anti-inflammatory properties and suppress the body’s own immune system.

I think it is an important point to make when championing a diet such as this, that I am not anti-medication. Inflammation reduction via whatever means possible is of priority when dealing with an aggressive inflammatory illness. It also puts the body in a more receptive state for healing.

Having said this, though steroids helped with the pain, they left me emotionally vulnerable. Methotrexate caused nausea and a lot of distressing hair loss. In addition to this, by the end of April 2014 I was experiencing terrible acid reflux despite proton pump inhibitors (anti-acid tablets), could barely walk or cope with any pressure on my body, was exhausted, and still rated as 7/10 in severity by the Rheumatologist.

The result of this was triple DMARD therapy with the addition of Avara (leflunomide), more steroids and a steroid infusion, the timing of which unfortunately resulted in me failing the criteria when assessed for more targeted, biologic therapy.

Shortly after this, my bloods began to worsen again, and I realised I had no option — I had to take matters into my own hands.

I began the Paddison Program on May 15th, 2014 and was absolutely gob-smacked to find that within two days the acid reflux had completely gone. I’ve had no need to take proton pump inhibitors since and was in fact so excited at this result that I immediately took a risk and stopped the Avara.

Seven weeks later, on a diet of only vegetables, fruits and a few simple grains, I was once again thrilled to discover my bloods were heading towards remission. On Tynwald (our National) Day, July 5th 2014, I celebrated my improved mobility by completing the 700-metre sea swim leg of the Adventure Race I had been forced to miss the previous September.

From here on in, though I remember it didn’t feel like it at the time, I progressed steadily in my healing. By October 2014, on dual DMARD therapy alone (no steroid tablets), my bloods were normal, and I was able to compete in the open water swim leg of an extreme triathlon. I also began to ride a bike again, and though my body has never since been able to run, by September 2015, fuelled on plants, I was well enough to finish the notoriously challenging End2End 75 km mountain bike race in 6 and a half hours. This I did on only 25mg Methotrexate and one daily 500g tablet of Sulfasalazine.

Unfortunately, shortly after this I experienced a trauma which, perhaps combined with the unidentified effect of shifting from Methotrexate injections to tablets, caused a relapse in my hips and right knee, once again rendering me immobilised. Due to problems with my healthcare, it took 18 months for an MRI to finally identify that hip joint swelling was indeed the main culprit, and for me to receive the correct medical intervention to get back on track.

The difficulty experienced during this time is reflected in the fact that I felt compelled to create Without Wings, plus, by some strange twist of fate, I unearthed a previously unknown gift for poetry, which led to me winning the locally prestigious Manx Litfest Poetry Slam, 2017.

It is now January 2019, and on a strict, no-oil plant-based diet, my bloods have been in remission from this ‘progressive and incurable’ illness for over a year. I take only 10mg Methotrexate now and my Rheumatologist is very happy with my progress. Last August I celebrated my mobility by completing the Three Peaks in the Yorkshire Dales, raising nearly £1000 for Without Wings. I can also play my trombone again, and over the last two summers have performed at several UK and Isle of Man music festivals, both as a musician and as a fast-paced, physically dynamic story-telling performance poet/ artist.

I am not going to pretend my journey to managing this illness is over, or that it has been easy. So far however, eating only simple, plant-based foods not only fits with my compassionate ethics and respect for life, but has given me vital control over an illness that at one time threatened to destroy everything. In addition to this, eating plant-based has given me an energy that a few years ago seemed unimaginable.

It is for this reason that Without Wings, alongside our counselling and other initiatives, provides educational and explorative talks regarding the health benefits of a plant-based diet on the Isle of Man. For this, our third year of such talks, we are looking forward to presentations from medical doctors from the UK who advocate a more holistic approach to dealing with chronic disease. For more information on the charity, please visit our website, www.withoutwings.co.uk or follow us on Facebook @withoutwingsiom