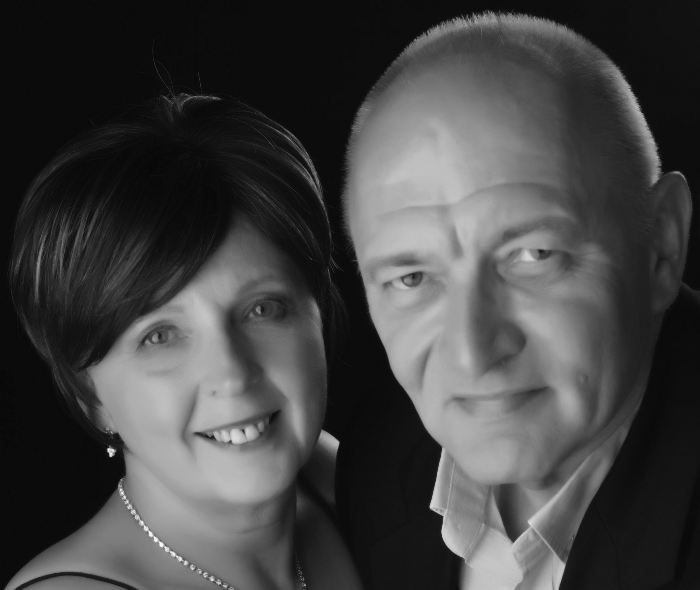 It’s never too late to change to a whole food plant-based diet. This is the story of Jimmy Quinn who changed his diet to improve his chances of recovery from heart disease.

I have always kept myself as fit as possible. In my youth I did a lot of sports and became vegetarian. As a young man I had manual jobs and walked my dog for 2 hours a day. When I started my career in IT I began playing 5-a-side football, basketball and badminton at lunchtimes. My wife and I also took our daughters swimming 3 times a week. One of us would play with them while the other did 10 lengths. Then we swapped over. We did 30 lengths each. I used to walk to work and back, down a steep hill and back up at night.

One Christmas in the mid-1990s, when I was in my 30s, I caught the flu. I was ill for about 3 weeks but even after that I could feel my fitness deteriorating. When it got to the following August I couldn’t walk the length of our street because of severe chest pain.

I went to see my doctor, who thought the chest pain was due to angina (reduced blood flow to the heart muscles) and he put me on tablets, including GTN. After a few weeks I was back at work and normal life resumed for a while. The doctor sent me for tests on the basis that I was “too young to have heart disease”. The tests didn’t reveal anything so he sent me to see a Cardiologist, who performed an angiogram. This showed significant blockage of several of the coronary (heart) arteries confirming the diagnosis of angina and heart disease. He didn’t want me to have an operation because I was “too young”. He said that he wanted to wait for “Something to happen”. I asked if he meant a heart attack and he said “Yes”. At that time, about 30% of people having their first heart attack didn’t survive it. That frightened me!

I tried to live “normally” but my health got gradually worse. One day, walking home from the hospital (only a few miles) I developed chest pain. I took a GTN tablet but it didn’t work. My wife is a medical professional so I phoned her at work. She told me to take another dose of GTN and call an ambulance. I did. An hour later she called me back, asking why I was still at home. I told her that the ambulance hadn’t turned up. She told me to wait there and she would come home and take me to hospital.

When I arrived at A&E my blood pressure was too low so they sent me to the Assessment Unit. They sent my wife away and put me in a bed and wired me up to a monitor. A junior doctor told the nurse to put me on a GTN drip for the pain in my chest. Because my BP was already too low she asked him 3 times if he was sure. A few seconds after she inserted the drip, everything went black. The next thing I remember was someone saying “It’s OK, we’ve got you”. When I opened my eyes a senior doctor asked me my name, address, DoB, etc. and decided that I was OK. I kept quiet and listened to the medical staff to try and find out what was going on. Apparently, the lines on the monitor had all gone flat and they had had to resuscitate me. When all the medical staff moved away the patient in the next bed said “I thought you were a goner there, mate. They had to jump-start you”. Wow! Later, they told my wife that I had had a “funny turn”.

They moved me to the Coronary Care Unit and wired me up again. My heart rate was normally in the low 50s bpm. When it came to going to sleep my heart rate started dropping. When it got below 40 all the alarms went off which frightened some of my fellow patients so the nurse turned my monitor off. No sleep for me that night! I daren’t.

My Cardiologist then decided that “something had happened” and I should have another angiogram. That showed I had 3 blocked coronary arteries and needed immediate bypass surgery. There was a 2-year waiting list. Luckily I had private medical insurance so I was admitted to hospital a few weeks later and had 4 vessel coronary artery bypass surgery (they found another blocked artery at the time of surgery). A few days later the surgeon told me that I would be back in 5 years for another bypass. That was 1997 and I was 41 years old. So far the lessons I had learnt included:

But I didn’t have to go back in 5 years, which I believe was because of my vegetarian diet and exercise.

Over the years I have been on a lot of medications for elevated blood pressure (BP) but none seemed to work and instead gave me a lot of side effects. However, I remained relatively healthy until 2016. Again, I caught a viral infection and it left me with a cough I couldn’t get rid of. I saw a doctor and she took my BP. It was 240/140, (normal BP is 120/80). She wanted to send me to hospital but, because I was away from home, I drove back home instead and went straight to my own doctor.

Lesson 3: When blood isn’t flowing to your brain properly, you can’t think straight.

More medications! My BP stabilized by Christmas 2017 but once again, I caught Australian flu and while suffering from that I had a mini-stroke, which affected my left eye. I only have peripheral vision in that eye now.

My BP went up again and my doctor advised me that I shouldn’t be working with BP that high so I took early retirement. I was 62 years old.

I had tests and examinations at the hospital and they revealed that my left carotid (neck) artery was blocked. The doctor said that he couldn’t operate because doing so might dislodge something and give me another stroke and possibly kill me. My wife and I both thought that I was being left to die!

A few weeks later our eldest daughter told us about some films she had been watching: “What The Health” and “Forks Over Knives”. We watched them both. “Forks Over Knives” is about a study of 800,000 Chinese people, what they eat and their health, “The China Study”. In the film, there is a man with 27 diseases. After 6 months on a Whole Food Plant-Based (WFPB) diet he was down to 1 disease. That film inspired us! We bought the book “How Not To Die” and we followed the advice therein and changed to a WFPB diets low in added oil, sugar and salt, in March 2018. We are still eating this way. It is for life!

My BP is now 120/80. I keep a record and this is the average, rounded up. An ideal blood cholesterol level is usually considered to be less than 5mmol. Mine was 6.5mmol/L for years and nothing budged it until this diet. It is now 4.1mmol/L. My weight was 14½ stone and is now 12½ stone, the same weight as in my twenties. So, it took only 8 months. My doctor is gradually taking me off all the medications. The diuretics, beta-blockers and statins have gone. Now, I only take 1 prescribed tablet, Clopidogrel, to make my blood less sticky. I also take Vitamins B12 and D, Co-enzyme Q10 and a multivitamin, just to make sure.

As an aside, I am taking part in a study about the development of dementia and related diseases. I took a cognitive (brain) function test last year (2017) and scored 36. The average score for my age group is 38–43. When I took the test a year later (Dec 2018) I scored 54. Why the improvement? This time last year I was heading for a mini-stroke with blockages to the arteries supplying the brain. That could have explained the initial low score. Since March 2018, I have been eating a WFPB diet. It looks as though my diet could have helped to improve my cognitive function as well as my heart health.

My wife has suffered from allergies such as hay fever, asthma, house dust, cats, air fresheners, etc. since her teenage years. Since transitioning to a WFPB diet, these have reduced significantly. The only allergic reaction she has had was due to either cats or cat litter.

Lesson 4: If you have any serious illness, try the WFPB diet. See your doctor as well!